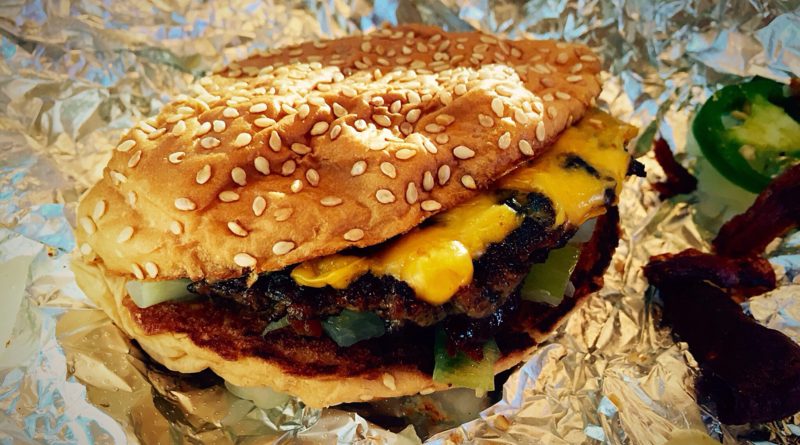 There are over 250,000 possible ways to order a burger at Five Guys. We use only fresh roll stamped prime beef. There are no freezers in Five Guys locations, just coolers. Nothing is ever frozen. We use only Peanut oil.

I seem to be one of the few people left in the country who hasn’t been to one of the ever-expanding number of Five Guys opening up. I’m remedying that today!

The menu isn’t large – basically combinations of cheese and bacon, in two sizes.

We’ve had a guest review of the full size cheeseburger, and today I’m having the smaller Little Bacon Cheeseburger. I do like bacon on my burger.

Five Guys hasn’t been here long but is instantly recognisable with its white and red styling, a sort of modern nod to burger joints and diners of the mid-20th century.

In almost every picture I’ve seen of Five Guys burgers, the cheese is shown with sticky tentacles at all angles and it looks great.

The other draw is the Coke Freestyle machine. Both the burger and the drink here offer a far larger scope for customisation than anywhere else, and we’ll come back to that.

I placed my order and was given an empty cup and sent to the drinks machine. Initially confusing, I eventually figured out that you have to select a top level drink type before getting down to the flavours.

I selected Coke Zero Orange and it came out looking like Coke mixed with Fanta. It tasted like that too.

It’s nice to have so much choice but I can imagine queues at the machine at busy times as people ponder and stutter over choices.

Anyway, my order was called and I went to get it.

In my paper bag was my burger wrapped in foil and far too many fries for the tiny cup. They spilled out all over the inside of the bag, and that was the “little” fries!

I tried them first and they were good. It sounds silly, but they did really taste of potato. That really isn’t always the case. They were good, with plenty skin left on, and had clearly been playing in the salt for a bit.

The burger, when I opened it up, wasn’t really little either! The toppings I’d chosen were jalapenos and grilled onions.

Mark my words, Five Guys is going to shake things up with the almost endless customisation opportunities.

It’s not a matter of if, but when the others catch up.

The squashy bun was well suited to this burger. Seeded and tasty, it also held everything in and was strangely pleasant to hold.

The bacon was great too. Crispy, crunchy and generous. I got bacon crunch with just about every bite. It was small pieces spread out over the circumference rather than huge rashers sticking out the sides.

The cheese was fine. I got its texture all the way through, and a bit but not a lot, of its taste.

I can’t really argue with their wording. Personal choice would have a bit of pink in the middle, but it was juicy enough. Pretty tasty actually, albeit quite thin.

And that brings me to my own toppings. The grilled onions were really good and generous too, and they gave a distinct flavour throughout.

The jalapenos were no shrinking violets. Almost too hot, and I’ve never experienced that before. They broke up the flow of flavours as I got through the burger and I never really established whether that was good or bad.

Overall, I enjoyed my first Five Guys very much, and more than I thought I would.

Their expansion is at a rate of knots and customisation is immense.

On top of that, certainly in this branch, all the staff seemed to be enjoying themselves and it gives a great bump to the customer’s experience. Let’s face it, happy people in burger joints doesn’t happen all the time.

The only stumbling block I can see to all of this is the price.

My little burger with little fries and a drink came to £12. That’s Honest Burgers territory. And clearly the “big” versions would be more.

While they may be outdoing the established high street brands on some things, price isn’t one of them.

That said, watch this space.

Over the next couple of years Five Guys is going to change the British burger scene, and I’m already thinking about my next customisation! 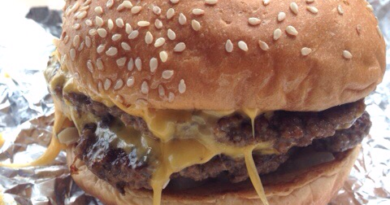