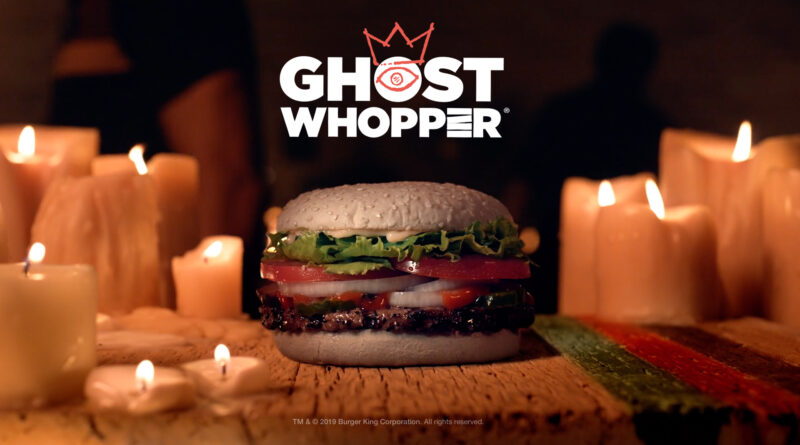 Burger King USA are launching a new burger for Halloween – the Ghost Whopper.

When I saw the press release (below) I instantly thought of Ghost Pepper chillies but unfortunately, these are not on the build.

This spooky sounding burger features your regular Whopper ingredients, but the USP of the Ghost Whopper is that it is on a “White Cheddar Cheese flavoured white sesame seed bun”. 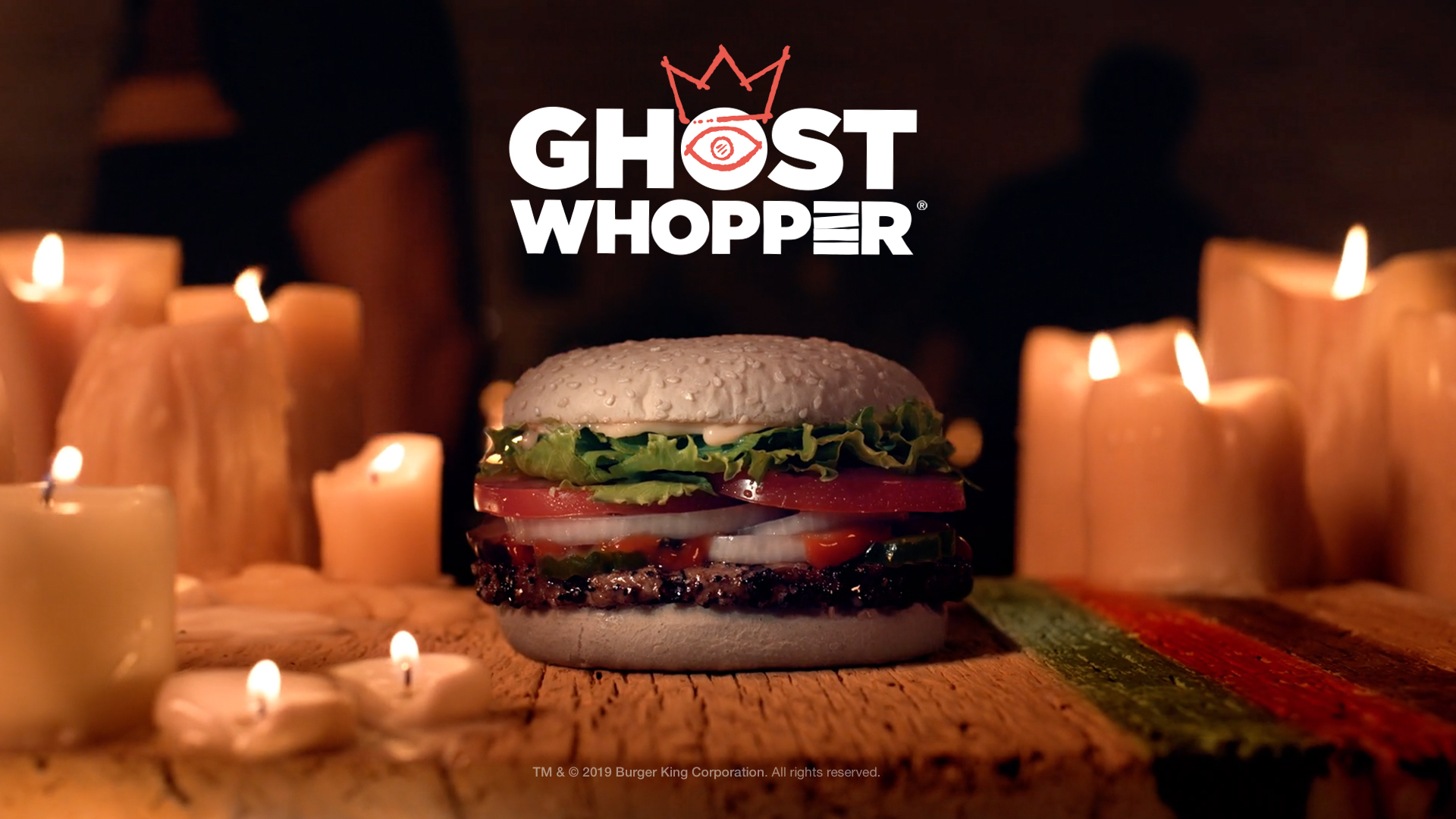 MIAMI – October 21st, 2019 – The BURGER KING® brand has pulled off every taste test on Earth, but this Halloween, they did one that’s out of this world. Yup, the brand gave its new Ghost WHOPPER® sandwich, made with spectral-white buns, to spirits.

The BURGER KING® brand partnered with Riz Mirza, a trance channel of international renown who can turn his body into a vessel for spirits. Together, they conducted the spirit taste test in front of participating guests so the authenticity of this unusual experiment could be verified.

Mirza incorporated spirits from the location where the spirit taste test took place: The Alexandria Hotel.

Infamous for its Phantom Wing – which was created when an entire section of the building was bricked off in the 1930’s after several paranormal sightings – the Alexandria Hotel was the perfect place to connect with spirits.

After all, it’s a location with a very “energetic imprint” from the souls who died there, according to Mirza.

When the master medium invited the haunted hotel’s spirits into his body, the souls from the other side of the veil were able to taste the 100% flame-grilled beef and freshly-cut tomatoes and onion in the Ghost WHOPPER® sandwich.

In the brief moments they were on Earth, the spirits gave their own review. “It’s beyond belief to experience this taste,” said one of the spirits. Another one affirmed, “It’s filth!”

Others just didn’t know what they were holding in their hands because they’ve never seen a hamburger in their lifetime.

“It was interesting to see what we could learn from the spirits,” said one of the participating guests. “It’s all b***s***,” a skeptic in the group added. “However, whether we believe the medium truly helped the BURGER KING® brand feed a sandwich to spirits or not, at least we know someone… or something approved the taste of the Ghost WHOPPER® sandwich.”

The Ghost WHOPPER® sandwich will be available for a limited time only at 10 select restaurants* across the country beginning October 24th for a recommended price of $4.59.

When I asked if this would be available in other countries I was told that it was a US exclusive only but the Ghost Whopper has already popped up at BK Austria. 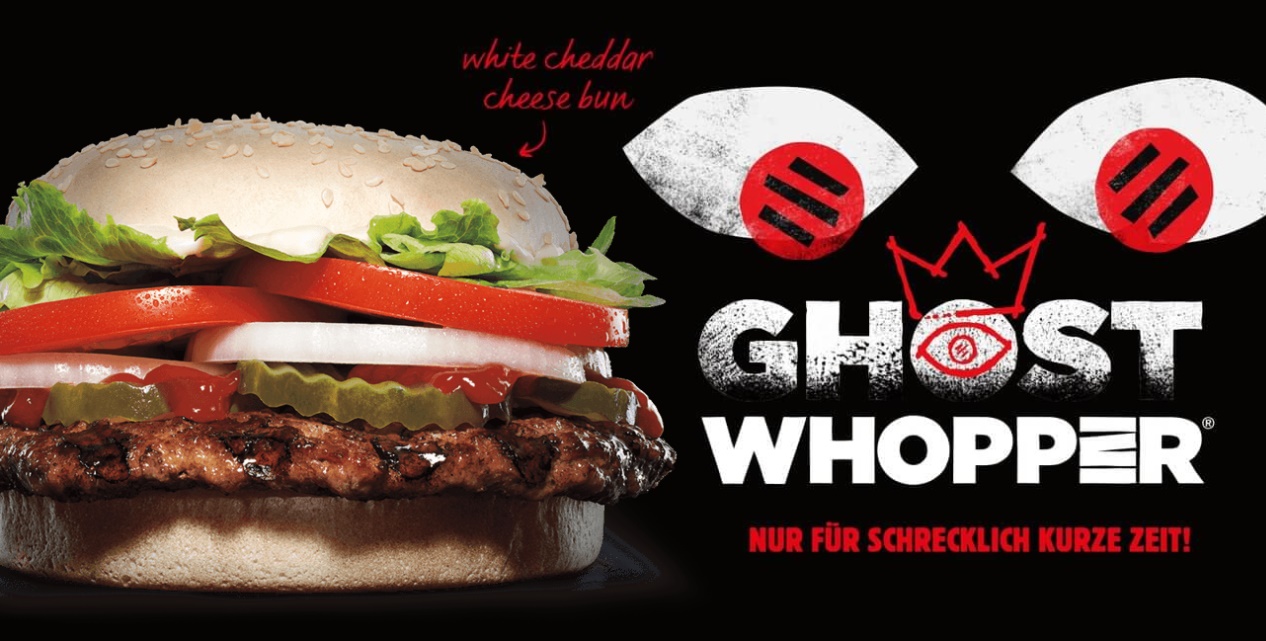 What do you think of the new spooktacular Whopper at Burger King?

Is it better than the Halloween Whopper or Nightmare King?

Should it have had some sort of sauce made from Ghost Chilli Peppers!? 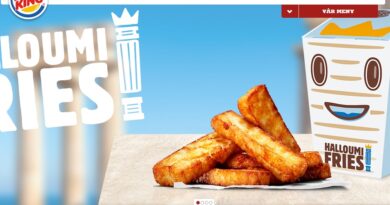 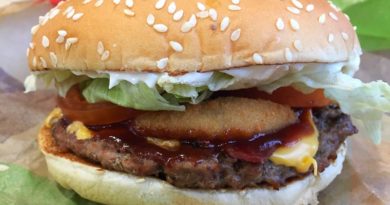 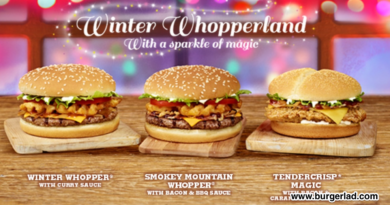