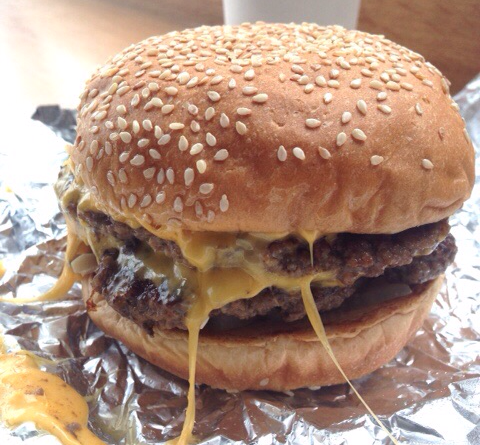 There are over 250,000 possible ways to order a burger at Five Guys. We use only fresh roll stamped prime beef. There are no freezers in Five Guys locations, just coolers. Nothing is ever frozen. We use only Peanut oil.

Burger Lad® encourages guest reviews. But to be honest I wanted to be the first to review Five Guys on your favourite burger review website and that’s been a rule until now.

OK there were one or two occasions where we nearly visited the Solihull branch but the mission got aborted for various reasons.

Fast forward a month or two… maybe more, and The Boss of Buns got in touch asking if we’d feature his review. How could we turn that down…!?

As a burger lover, I had heard a lot of good things about the Five Guys UK chain, sadly my nearest was around an hour and a half away and so I had to make do with drooling over their website and reading other’s reviews.

Finally today I happened to be in Reading, so couldn’t resist a quick visit to see what all the fuss was about.

My worry was, as is often the case with these things, where there has been so much hype around something, you are then left disappointed. I was hoping today wouldn’t be the same.

I walked in around 11.15 to find the restaurant empty so wouldn’t have long to wait.

Their menu is quite simple, with no “extras” such as milkshakes or desserts, however the burgers are absolutely “have it your way” as you choose as few or as many salad / sauce / extra items as you wish.

I ordered a cheeseburger, with extra cheese (I love a good cheeseburger), topped with just grilled onions and grilled mushrooms. I purposely avoided any sauces as wanted to see how moist the burger was.

I ordered a side of large fries, but was then asked by the very helpful staff member, if I had been there before? She added that a large fries usually fed a family of four (I saw no problem with this!!!) and she suggested that a small portion would be fine for one.

To be honest, ordering a small anything was a little alien to me, but I went with her advice. I ordered a drink with it and my order was complete. My total order was just over £13 which I had expected for a “premium” burger experience such as this.

She handed me my cup and I headed over to the Coca Cola Freestyle dispenser, which promised 125 different sodas. I sat drinking my vanilla Diet Coke (diet soda and small fries, what was going on?!) and watched in anticipation as they cooked my burger.

After about 5 minutes my order was called and I hurried back to my table with my order.

Opening the bag, she hadn’t been wrong about the fries, there was plenty and they were just as fries should be, crunchy, skins partly on and piping hot…

I opened the foil wrapper and admired the burger in front of me. It was heavy and looked the part with cheese melting out of the side.

I took the first bite and it was every bit as good as I had hoped.

The beef was clearly good quality, full of flavour and cooked perfectly. I always like my beef a little on the rare side and whilst I couldn’t see much pink meat, it was very tender and, as much as I hate to use the cliché, it just melted in my mouth.

I was right to order without any sauce as the burger and the cheese that covered it, resulted in a very moist burger that needed no further dressing.

The onions and mushrooms topped it off perfectly and I can say without any shadow of a doubt that it was the best burger I’ve had, not only in the UK, but even in the States.

As I took the last bite, my only disappointment was just that, that it was my last bite, but the meal had been more than plenty to satisfy even my hunger.

Would I go back? Absolutely and would recommend it to any burger fans.

If I had to find any fault whatsoever, it is purely that they have few locations so far in the UK, but I believe there are plans for plenty more in the coming 12 months.

Now I can see what everyone was talking about!

The Boss of Buns 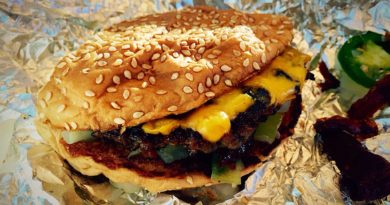