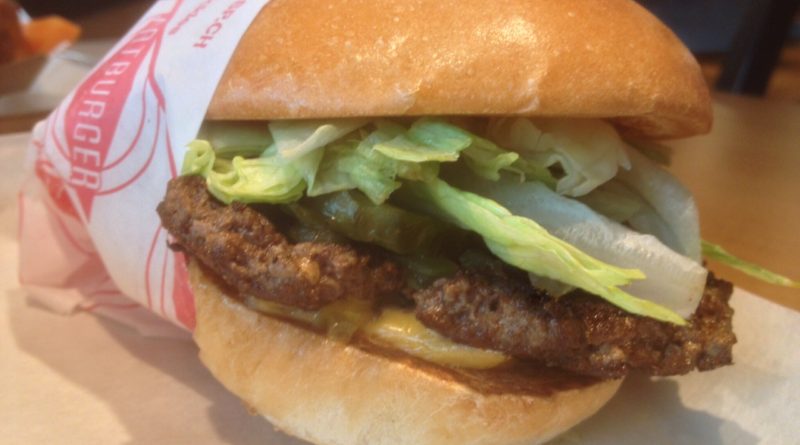 Every meal is cooked-to-order, just the way you want it, every time. Using only the freshest ingredients, and traditional cooking methods (you won’t find heat-lamps or microwaves in our stands), we’re best known for our fresh-never-frozen, lean-beef, chicken, turkey and veggie burgers & sandwiches.

Somebody asked me the other day, which burger joint(s) I would be checking out on my impending trip to London…

“Fatburger?” they quizzed. “What is Fatburger? I’ve never heard of them.”

And this is the response I would expect from the general, non-savvy burger eating public.

Fatburger is an American Fast Casual restaurant chain founded in 1952. It was originally operating under the name of Mr. Fatburger from 1947 but that was dropped and all their branding states “Since 1952” so that appears to be the “official” date.

Predominantly found in the California area, the chain with the tagline “The Last Great Hamburger Stand” began an expansion in North America in the late 1990s.

Now with over 150 locations in countries around the world such as China, Malaysia, India and Pakistan, I am in London to visit their first and only UK restaurant in Camden Town.

The menu here centres on the signature Fatburger beef patty. This is available in single, double, triple and quad options and customers can have any of the following free condiments; lettuce, tomato, mayo, mustard, relish, onions and pickles. You can also add to this upon request with some other sauces and toppings.

Additional premium add-ons include egg, beef bacon, mushrooms, Cheddar or Swiss cheese, chilli or guacamole all priced at £1.00 each.

I apologise now if it sounds like I am just listing the menu but this is to give you an idea of the customisation options available to you – something the brand has long since prided itself on with its “build-your-own-burger experience”.

Looking for a change from beef? Fatburger also provides the choice of chicken, turkey or veggie burgers. It is also worth noting that Fatburger (in the UK) only use 100% Halal certified beef so cater for a wide population of people that will only eat Halal.

Inside it’s got that fast food burger chain vibe going on.

Here you order at the counter, get your placard with a number on it and wait for your burger to be cooked fresh. Having eaten one burger already this afternoon I will have to pass on the behemoth that is the Quad today (£11.50).

I like the feel of the place though. It’s clean, modern and the tunes are banging. It does give the illusion of a little piece of Americana… just a stone’s throw away from Camden Lock.

There’s so much choice! What do I go with?

I’m tempted to add Jalapeños and grilled onions to a single Fatburger (cheese is a given) but I want the bare-bones Fatburger to truly see what it is like. If and when I return I’ll start to pimp my burger up with some of the options listed above.

The smell coming from the open kitchen is certainly encouraging so I am really looking forward to sampling my first ever Fatburger. I’ve always heard good things from people that have been fortunate enough to try it in the States.

When my single arrived it looked really inviting in that signature Fatburger wrapping, presented with half the burger showing like you see on all their promotional material.

What I did notice is that the American cheese was under the patty where most of the time it is on top. But what did it all taste like?

Well the major player where the beef is concerned is heavy black pepper seasoning. It’s really quite strong and is the dominant force.

The minced meat is kept in a 4oz ball in a drawer in the kitchen and placed on the griddle. This is then smashed by hand and seasoned with salt and pepper.

This is similar to the approach used by Smashburger (they use a large press-down mechanism) but I was told that you can lose some precision adopting this method, hence why Fatburger use a spatula… like they have since 1952.

This process creates a knobbly, uneven patty which is moist, juicy and has a semi-crystallised crust allowing retention of flavour.

What I did notice is that because Fatburger use leaner mince (it’s not an 80/20 mix here) you lose some of that buttery taste which is prevalent in other burgers that use this almost textbook ratio.

That saying, the beef is still pretty good, especially at this price point and within the time scales it takes to cook fresh to order. And nothing is frozen here too which is a plus point!

It’s not for me to go into too much detail about toppings in this review as you can mix and match from so many different combinations that each time you can get a different experience at Fatburger.

I went with lettuce, relish, pickles and onions and I can report back that the sweet gherkin relish (a bespoke mix made for the UK) is extremely sweet. It’s good but very, very sweet!

I didn’t get too much from the fresh onions, they failed to impart much flavour on proceedings which was a shame.

The pickles though were great and my only minor criticism is that the lettuce to meat ratio didn’t seem right, like there was too much of the green stuff.

I guess to solve this next time, the best thing to do would be to double up that patty!

What I would say about Fatburger is that the traditional burger buns they use are some of the best I’ve had.

In development they tested brioche but found that they were too sweet, especially with that relish… so they opted for Maison Du Pain rolls which are delivered fresh (never frozen!) three times per week.

Today I was also fortunate enough to grab some time with Arif, the franchise owner of Fatburger. Arif told me that they opened in the UK in May 2015 and that a lot of people who have experienced the brand in the USA (mainly Vegas and California) make a pilgrimage to visit here.

Fatburger very much see themselves as “young and urban” and want to appeal to a different demographic to say neighbouring Byron Hamburgers (they are literally next door to each other!).

I enquired about the decision to use Halal meat and Arif said that they want to cater to everyone. Their Hot Dogs are Kosher, so Fatburger is very much about making their food available to the widest audience possible.

The debate on whether all people would like to eat Halal is not for this website, but by having Halal burgers, they offer something that a lot of major chains do not have on their menus.

We can also reveal a BURGER LAD® exclusive: the hunt for the second store is on and they have earmarked a location in South West London in Putney, so watch this space for the second Fatburger in the UK!!

Fatburger isn’t going to stop there either as they will look to further spread across London.

Interestingly, they are co-branded with Buffalo’s Café and on their segment of the menu they offer wraps, Buffalo Wings, Boneless Wings and Chicken Tenders.

The Wing Sauces range from the mild scale of Sweet Teriyaki through to Coconut Jerk and to the hottest on the scale – Death Valley. Normally I’d opt for the most dangerous on the menu but with a theatre showing and a train back to BLHQ I decided on the “sensible” choice of Red Hot Ranch.

Lovely. Excellent. Tender, juicy and with no bones! With twelve different flavours and the option of ordering a platter of one-hundred (yes 100 for £86!!) again you can try something new every time you return. Trust me, these are well worth the visit alone!

I also got to sample the Homemade Onion Rings which are recommended at £2.00 – crispy on the outside with a beautiful but slightly mild onion flavour.

I washed this down with a Reese’s Peanut Butter Premium Ice Cream Milkshake which completed a very enjoyable meal.

As a brand, I get what Fatburger is all about. They are targeting a demographic who might not want the formality of a Byron or GBK but something up from your standard McDonald’s or Burger King.

There are going to be obvious comparisons with Smashburger too.

Both have got one location in the UK looking to expand. Both use fresh minced beef (never frozen!) which is in a ball and then smashed on the griddle. Both offer a build-your-own burger platform.

They are similar but also different at the same time and certainly both placed in the same price bracket (and quick service) above McDonald’s but below some of the more expensive chains.

Fatburger is now starting to get a bit of a cult following especially for their “Two For Tuesdays” promo – pay for a single and get a double, pay for a double and get a quad – it’s a good way to get a bigger burger for your buck!

Due to the leanness of the beef used some flavour is lost so you don’t get that buttery taste of other burgers. The smashing process however, gives you a lovely caramelised crust which locks in the juiciness.

The patty is respectable. It’s not fantastic and having had Haché a couple of hours before it’s not in that league.

But then that’s not what Fatburger is about – it’s a completely different chain and I couldn’t have picked two more contrasting burger joints to check out. And both within 5 minutes of each other!

Don’t get me wrong, it’s still enjoyable. Seasoned well with a very strong black pepper that ignites your taste buds.

All the food is fresh (again never frozen!) and it is great to see the brand in the UK (my visit coming a bit late since they opened last year).

It’s a good, fast food cheeseburger and exceptional value if you can get there on a Tuesday!

If you’re in Camden looking for a piece of Americana from a cult US burger chain with a customisable burger platform with plenty of options AND the ability to load up to Quad-size then hit them up.

Today I didn’t have to pay for any of the food I sampled, but like any of our unbiased reviews this had no impact on our impartial analysis.

Next time I am in London I will be heading back to Fatburger. Fact. 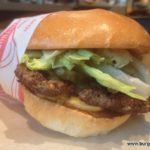