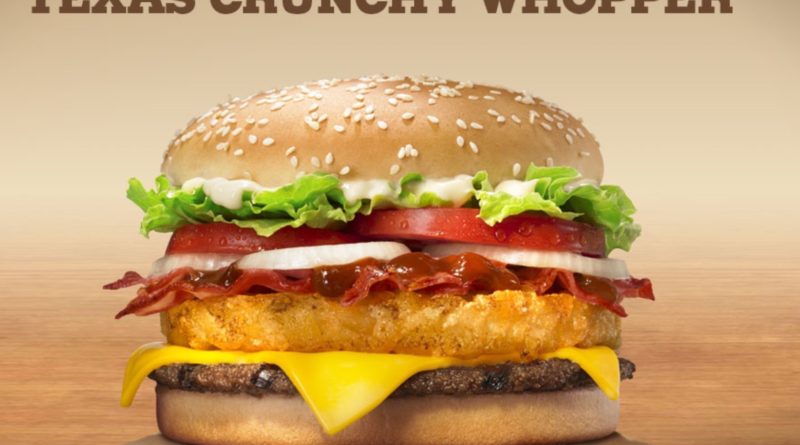 Yeehaw! Everything’s bigger and better in Texas, especially our new and extra tasty Texas Crunchy Whopper®. Topped with our exclusive potato rosti the crunch is not to be missed. Not forgetting the bacon, cheese and irresistible BBQ sauce for that real Western flavour of course.

The latest promotion from Burger King UK is the Route 66 Roadtrip, news first brought to us by Burger Lad®.

It consists of a promotional Whopper, Steakhouse and Tendercrisp. The first I’m having is the Texas Crunchy Whopper.

The selection of these names is often a bit odd but in this case it’s quite reasonable. The crunchy comes from the large potato rosti and the Texas presumably from the barbecue flavour.

The large circular rosti in the middle also made the fries rather redundant, and the whole thing looked pretty well like the marketing pictured.

Anyway, when I sat down with my tray, I was quite impressed. A neat promotional box with the name of the promo and the three individual burgers in it.

Opening it up, I saw a burger with a lot of toppings. The bun and the patty were BK’s standard – doing the job adequately. The patty is quite substantial, with an above average circumference.

What distinguishes this from a bacon cheeseburger with BBQ is the rosti.

Shaped into a circle of much the same circumference as the patty, it is the stand out feature and I must say that it’s good.

It’s definitely crunchy and has a fluffy potato taste in the middle. Not overpowering and works well with the BBQ flavours. It’s a well-chosen gimmick.

Two large slices of tomato were removed. They looked OK, fresh, but I just don’t like them. There was lettuce, doing much what lettuce always does – practically nothing. Not BK’s fault, that’s just lettuce.

The crunchy texture from the rosti was further emphasised by the bacon on the top. Small pieces but definitely noticeable and added a small punch to both texture and taste.

That brings me to the cheese – a standard floppy slice, but as is so often the case with fast food – it hasn’t had a chance to melt.

Melted cheese is always better on a burger so there must be a way of allowing for that. As I said, this is not an issue unique to this burger.

I liked the taste throughout. The bun, especially the top half, disintegrated a bit toward the end, but that and the cheese are the only minor gripes here.

Honestly, I can’t fault it. It’s a good well thought-out promo burger and even the rosti gimmick works well.

I’d recommend you go and try one while it’s still around. 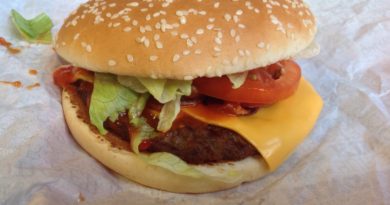 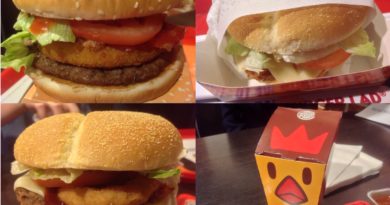 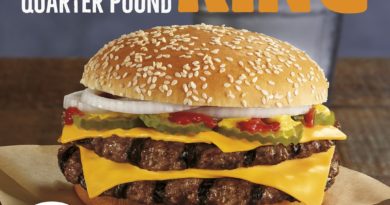