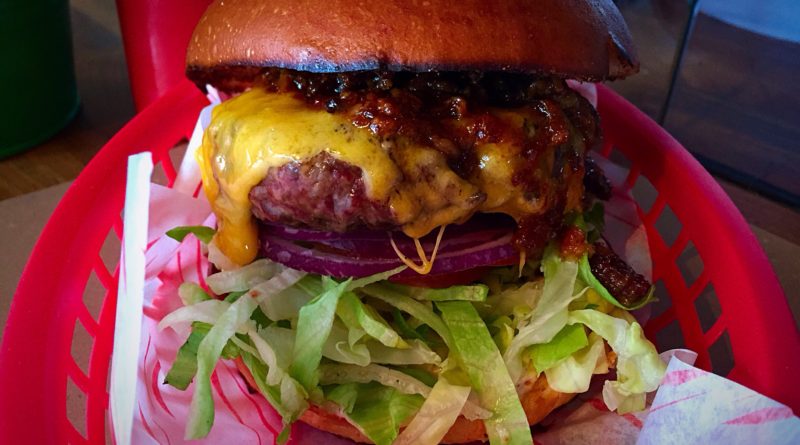 Josh is combining those explosive spice combinations with the highest quality, British-bred meat, as he cooks up a hurricane in his Boom Burger kitchen. Boom Burger – Our signature beef burger covered in cheese and bacon jam.

Boom Burger is a tiny place under the A40 flyover on Portobello Road. It’s jammed in amongst the unique and eclectic stalls and shops that define this area.

There are a whole load of languages and ethnicities around here but the predominant flavour is Caribbean. And that’s exactly where Boom fits in. It’s burgers with a Caribbean flavour.

There’s not a huge menu but it is varied. Fish, pork, chicken, beef and if we must, veggie.

Jerk chicken is delicious and for burgers I usually prefer beef. But I’ve had a lot of beef lately and just for a change I feel like having their slow-cooked pork which comes with jerk sauce and pineapple. Should be fantastically tropical.

The smells coming out of the place were utterly fantastic too, spoiled a bit by what looked like a teenage TV crew hanging around the door smoking.

When the place opened for business, I found that the only two tables inside the place had been taken over by the CBeebies which was bloody ridiculous actually.

But keep smiling and carry on. I took a seat on a stool at the bar so thank goodness for that.

When I put my order in, my pork burger was met with a puzzled look. Although it is on the menu on the website, seemingly it hasn’t been offered for some considerable time. So back to the default Beef. I also noticed there was a shrimp burger being sold, which wasn’t on the website.

Oh, that smell. If there’s a heaven and if it has a smell, then this is what it would smell like.

In front of where I sat, there were pots and pans of fantastic-looking and fantastic-smelling chicken. The perfect antidote to what was a chuffing cold and wet London day.

The CBeebies bustled around with cameras, beards, microphones and believe it or not, skateboards. It was frankly extremely irritating and downright inappropriate to commandeer a tiny place like this. They should have done it outside business hours.

I can only hope the promotional benefit of whatever it was they were doing was of some benefit to the business because otherwise they were really taking advantage of the laid back and friendly nature of the Boom Burger guys.

Focus on the burger. And the smells. My table settings came out first. Branded paper mat, ketchup, mayo, cutlery.

The burger followed shortly after, in a little basket. It wasn’t exactly small.

A crusty, shiny bun with lettuce, tomato and red onions on the bottom, a substantial patty, topped in turn with bacon jam and cheese. The unique smell of the place continued into this burger. It was amazing.

And biting into this burger was a revelation. There was seasoning in there, spicy, presumably jerk and it was one of the best things I’ve ever tasted anywhere.

The flavour began gently and built up slowly throughout the eating of the burger, but didn’t stop there. It lingered on my tongue for quite some time afterwards, reminding me of this incredible burger.

It wasn’t all about the seasoning though. The patty, cooked medium as I’d asked, was also very tasty, with a lovely texture.

And the bun looked the part, while the toppings added the bright colours you might expect of the Caribbean.

The place was nice, unique and the food blew me away! I mean, really. This place is an absolute must.

I just got unlucky with the filming and presumably that doesn’t happen very often, but the staff took it in their stride. Everything else was awesome.

Did I mention how good the smell was?