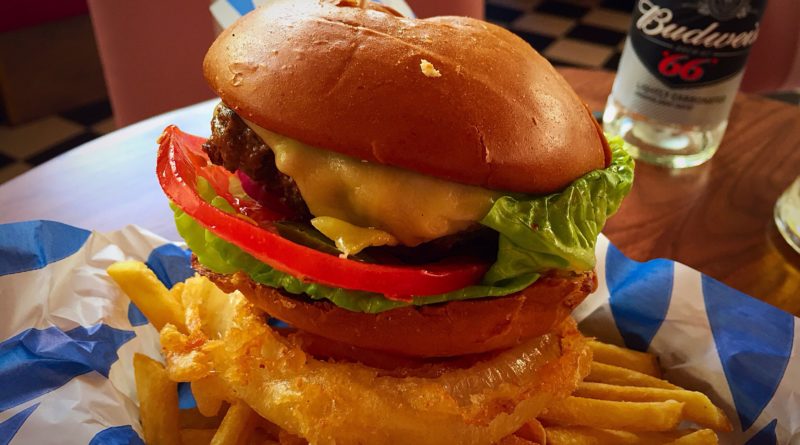 All Infamous burgers are handmade to our own special recipe and served on a brioche bun with salad, American coleslaw and your choice of fries. Infamous burger, Monterey Jack, onion rings and homemade burger sauce.

Nobody in Manchester can have missed the opening of Infamous Diner recently. It was a massive affair with all sorts of props, put on by its owner MAD who have a growing portfolio of mostly drinks establishments.

And no expense seems to have been spared on the decor either. It looks absolutely fantastic, decked out in raspberry hues and clever lighting. They are going for an American diner feel, but clearly toward the plusher end of the spectrum.

The question is – does the food match up?

Well, there’s a good-looking menu of diner-type food and, I must add, fairly reasonable prices.

On the menu, and the reason I’m here of course, is a burger section. At first glance varied, with fish, chicken, an interesting Mac & cheese “patty” as well as a couple of beef options, variations on what they call the “infamous” burger.

I’m going quite simple here – Infamous with Cheese. I think what it’s going to come down to is the patty and the bun, the latter of which is ubiquitous brioche. It’s served with salad and a choice of fries. The fries and salad as side dishes are £2.50 each, so that alone makes the £8.95 price very reasonable indeed.

The place is about half full when I’m in, but seems busier. People continue to come in. I get the distinct impression they are short of one or even two members of staff.

As is so often the case with new openings, it’s initially popular. I admit, first impressions are good. The welcome was happy and genuine and the decor very striking.

My beer was served in a mini-tankard straight from the freezer, which is a great touch. There’s actually a massive choice of hard and soft drinks available, including plenty of beers.

So the Infamous with Cheese is basically a cheeseburger with onion rings. There’s also a list of about 20 extra toppings so you can customise your burger pretty much any way you want. These days I do consider this sort of thing to be a bit lazy because it reduces the need for much creativity in the development kitchen. At any rate, the most important one is bacon, at £1.

I forgot to add the bacon though, as I was distracted by a group of 5 ridiculous hipsters waltzing in like they owned the place – beards, tight jeans, swagger, walking on the seats – that sort of thing.

Anyway, burger and fries arrived in a black plastic tray with generic blue/white wrap. I was kind of disappointed they hadn’t chosen to put the Infamous branding on the wax paper. The onion ring was on top, rather than inside, and the fries to the side.

The fries didn’t impress me, if I’m blunt. They looked fairly standard and were certainly cut well, but when I shoved a handful into my mouth, instead of the classic crispy crunch, these were chewy. They were also too salty for my liking, so I moved onto the burger.

It looked inviting enough – plenty of colour, and plenty of cheese. The “salad” consisted of a big slice of tomato, lettuce, pickle and red onion, and along with the beef patty and brioche bun, made up the build with the cheese.

The bun was ok. Perfectly sized for the contents, looked tasty and was nicely toasted. It was a reasonable choice. As were the red onion and pickle – they gave their tangy bite to this burger and I was grateful for their presence. The cheese, as I said, was also generous and had been properly melted over the top of the patty.

And so, the patty itself. Thick and cooked well-done, which isn’t my preference and this one was possibly overcooked, even for well-done.

If we are really honest, it was disappointing. It had a tightly-packed texture, more so than that of truly great burgers so it wasn’t in that category. It didn’t have any particularly outstanding taste. The combination of texture and overcooking resulted in a pretty disappointing meal, especially when the poor fries are taken into account.

I absolutely hate writing a less than great review about a place, not just because of my own lack of enjoyment but also because I love it when genuinely enthusiastic chefs produce tremendous burgers.

In this case, it does seem like the development of the burger was rushed and I just didn’t get the impression that their head chef Jason Latham had been involved at all. I’ve tasted his food before, and it’s a world apart from this.

However, much he was involved in the development of this burger, especially the beef patty, it was clearly not enough. I can only speak about the burger of course, not the rest of the menu, but I’d love to see a coarser beef mix with more seasoning and less cooking for starters.

The homemade burger sauce could do with further development and I do think the approach to the fries should start from the beginning again. Apart from anything else, they need to be crispy.

It seems to me that what is needed here is for chef Jason to have a free reign on the burger section and whatever other parts of the menu don’t reach his high standards and re-develop everything that needs re-developing.

Perhaps they took him on-board after creating the menu but that’s the wrong way round and now they really need his expertise, without interference, to tackle the problems before this burger becomes infamous for all the wrong reasons.

Will I be back? Yes, probably – once I know the menu has been redeveloped. I do like the place and it does give a slightly unique touch to the area. 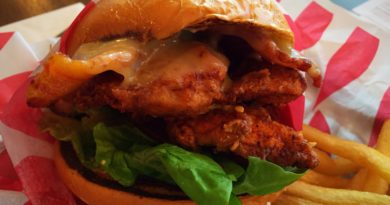