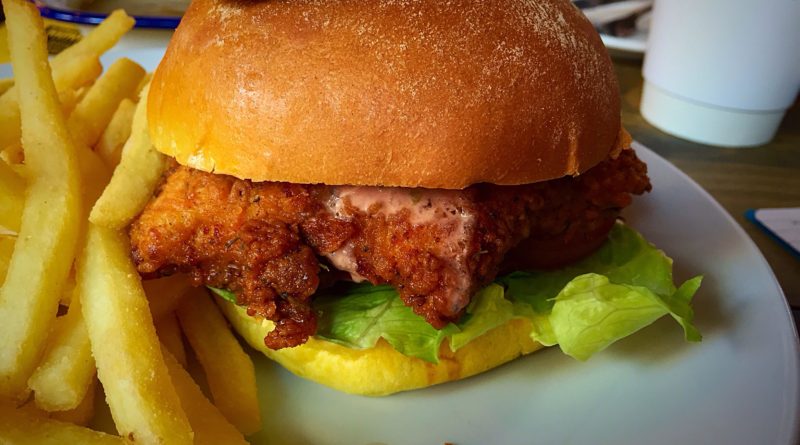 Review of Yard and Coop, Manchester Fill It Burger

Full buttermilk fried chicken breast with salad and our special relish in a brioche bun, served with chips and dill pickle.

Another new opening on the same stretch as Common and Home Sweet Home, Yard and Coop professes to offer the best fried chicken for miles.

Identified by the owners as the next big thing (others think it’s pizza, and others still think dirty/comfort food is on the way out – we’ll see!), I do expect we will be hearing a lot more from fried chicken in the coming months.

So, unsurprisingly the menu consists of chicken. Plates of thigh, breast, wings and monkey balls, along with a choice of crumb and sauce. There’s also wraps, salads and of course a burger. It’s quite a big menu and I do wonder if all the items will remain indefinitely.

But I’m here for the Fill It Burger. It’s a burger built around their buttermilk fried breast, with a special relish. No cheese, although that seems to be quite common with chicken burgers.

The place is also unashamedly hipster. Bare concrete floor, wooden decor and of course almost every male customer and member of staff has a beard. It all looks great (apart from the beards). A lot of work has clearly gone into creating a fun and welcoming space, with coops instead of booths, and intricate lighting.

There’s also a giant picture of a winking fox on one wall, but I’m not taking a picture of that as every other Twitter user in the universe / Northern Quarter seems to have done so already. Perhaps it is clever marketing, and that was the intention.

I sat down with a pleasant chocolate shake as I waited for my burger, although I’d far prefer it to be served in a glass rather than a takeaway mug. I was remarkably close to not ordering the burger at all – what I really wanted was a plate of chicken thighs, but then I wouldn’t be able to review it for Burger Lad®.

All thoughts of thighs went out the window when my burger arrived. A big plate with generous amount of fries and a separate bowl of chip shop curry, into which I began dipping my fries. This was really tasty and I momentarily forgot about the burger in front of me.

The fries weren’t amazing, but they were cooked properly, and they were included in the price of the burger. Crispy on the outside and fluffy on the inside.

So what? you might ask, but you’d be amazed at how many places get this wrong. The chip shop curry was also great. I can envisage hours, days of development to get this right and it’s paid off. I simply couldn’t stop dipping.

But I had to, for there was a burger to be eaten. My first impression was that it looked a bit bland – a pale and standard brioche, crumbed chicken, lettuce, tomato and a bit of sauce. But looks aren’t everything.

I bit in and my eyes lit up. This crispy crumb was spot on and the chicken inside even more so. I disposed of the tomato because I’m not keen on them and then I had a moment of sheer genius.

That doesn’t happen very often, but when it does it is brilliance unmatched by anything anywhere ever. I used my fork to scoop as much of the curry sauce as possible onto the chicken.

Forget the rubbish the tabloids tell you – if you want a so-called “secret menu” you have to make it yourself. And so I did. Putting the chip shop curry onto the burger was an improvement, and believe it or not, my waiter said he’s been known to do pretty much the same thing himself.

Anyway, I could talk about that chip shop curry forever, but the truth is, as it should be in a place like this, the star of the show was the chicken.

Anyone can fry chicken. But to get the taste and the texture just right is clearly difficult because most places can’t. Yard and Coop isn’t one of them.

This is about as good as it gets. A thick satisfying crunch to get through before reaching the softer white meat inside. I can really only think of a couple of places with better chicken.

I’d love the option to add cheese to this – perhaps if I’d asked – but other than that, it was thoroughly enjoyable.

I won’t rush to have it again, but not because it wasn’t nice, simply because I want to have thighs and monkey balls next time. Frustratingly in the short space of time between my visit and typing this review up, they’ve added a bigger spicier burger which I’d probably rather have had.

Don’t be surprised at all if you see further Yard and Coop branches in future – they seem to be onto something. 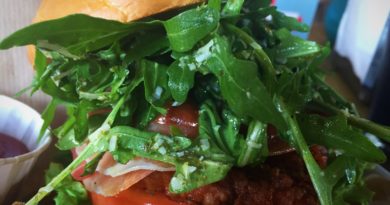