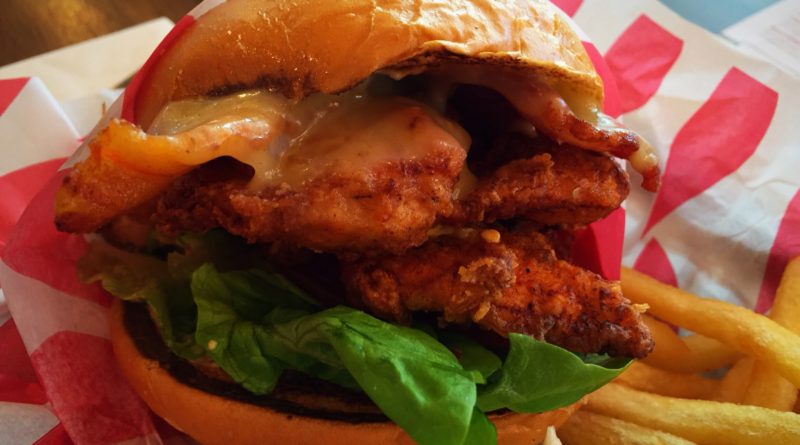 I’m at the Infamous Diner in Manchester again. You may recall we reviewed their Infamous Burger shortly after the opening, and left feeling there was considerable room for improvement.

Well, it so happens that head chef Jason (“area chef” officially) got in touch and said there was a new menu launching this week. So I’m back, and at first glance, the new menu looks rather like the old one.

That’s at first glance though, and it’s because the design of the menu is the same, the new items haven’t been labelled as “new” and most importantly for burger fans, the descriptions remain the same, even though it’s all change under the hood – more on that in a minute.

As I sat down, I noted two other tables of customers and thought the music was a little loud for so few people. But it was 50s Rock n roll and was totally in-keeping with the vibe of the place.

As I said in the earlier review, the themed decor is spot on. And besides, after a short while, it filled up, including a whole class of primary children, so the music soon retreated to the background.

Jason sat down and explained the new menu to me. Essentially the new items are spread throughout – corn dogs on the starters, chicken and waffles, hash, pancakes, hot dogs. All the good soul food stuff.

Burgers have been moved from a central spot on the menu, to the side as they aren’t the core focus. The list is expanded with the inclusion of a behemoth “Go Big or Go Home” which can only be described as a bit of everything, and costs more than the rest, unsurprisingly.

The main change however, and the main cause for concern the last time, is the beef patty. Completely redeveloped – brisket out and chuck in – yet this isn’t mentioned on the menu. More flavour and more training in the kitchen as to how to make it. Jason assures me that it is really good, and I’ve already decided I want to try it next time.

But he is also very proud of the chicken, so I decided, this time, to have The Colonel (a nod to a certain Kentucky gent in a white suit), which includes the same burger sauce as the other burgers, along with Jack cheese and bacon.

The burgers here also come on premium brioche which belies the low price of £8.95 for them all (including fries and slaw). It’s actually a very good deal.

As I waited, I also pondered the black Halloween burger that Infamous is running next weekend. There will also be weekly specials (Wednesday to Wednesday) including mains, milkshakes and desserts, starting later on once the new menu has bedded in. I understand the first of the specials will be Jason’s renowned meatloaf so that’s a must!

It’s clear from talking to him that the concept, the menu and even his own role have developed considerably from original plans, and hats should be doffed to the management for remaining open-minded as to the direction.

A final little nugget of information I noted down was that the company (MAD Ltd) are not only planning to open further concepts in Manchester, but also plan to roll the Infamous Diner brand out to other places.

Now, I must point out, in the interests of disclosure, that Jason refused to take payment for my meal, despite my protestations. That’s not normally my cup of tea – well, we’ve all read about reviewers who try to get freebies in return for favourable words.

That’s not our style at Burger Lad® – we value our integrity and the reviews are a subjective reflection of our enjoyment (or otherwise) regardless of payment arrangements.

That said, I was given the very distinct impression that I was going to enjoy my food this time anyway. Jason’s enthusiasm and pride in the food he and his staff produce is very engaging and left me in no doubt that significant improvements had been carried out at Infamous.

It’s fair to talk about all these things, but remember we are here to review a burger. As the main man himself would say, let’s get amongst it.

Firstly, the fries. I found them soft, chewy and salty last time, and am pleased to say they are none of these things now. Warm, crispy, they performed the sidekick role perfectly. There was a decent amount and if anything, I could’ve added salt. As so many people are getting excited about Star Wars now, let’s just say these are, in fact, the fries you are looking for.

The burger itself sat in a small paper bag, mouth open animal style, similar to In-N-Out and Shake Shack. This kind of sideways presentation is very appealing on the eye, and lends the burger a more sandwich-type aesthetic (which of course they originally were).

The brioche bun is indeed very good, even if you pull off pieces to eat on its own. Well-sized and suited to the job, it neither crumbled nor tore. Inside the bun were two generous pieces of crumb-coated chicken.

This chicken also got the eat-on-its-own test and passed. The crumb could possibly do with being a bit crispier, but the “secret spices” gave it a glowy tangy taste, while the meat inside was nice, with that slight teeth-stickiness that chicken does. I’m assuming it’s the same chicken that is added to the chicken and waffles dish, which I’ll definitely be having in future.

The list goes on. Two glorious rashers of bacon added their savoury goodness to the stack, while liberally-applied stringy cheese was perfectly melted between the two types of meat.

The pickles in here, along with the burger sauce, which I’m quite sure contains blended pickles too, was a really good sour tone to balance out the flavours.

And finally, I’m pleased to say that the tomato slice, while still large in diameter, was more thinly sliced – by far my preference, and didn’t intrude on proceedings.

In there as well was some red onion which nearly always delivers a sharp kick in certain bites – one of the best burger ingredients around (although at the bottom end of the burger-reviewing world, it has been known for onions to be bad-mouthed, believe it or not.

The final content was the lettuce – as ever, very easy on the eye but adding little to the taste. Hard to imagine all this content fitting in here (it’s not a massive burger) but it does, and it does so well.

The cheese and the sauce made sure it was a pretty messy, fun affair too. I certainly didn’t mind licking my fingers between bites.

This visit was an epiphany. It’s fair to say I was disappointed with the food last time, and the lesson today is very much about second chances.

Looking at the place, looking at the menu, you’d be forgiven for thinking nothing has changed. But you’d be wrong – under the hood, it’s all changed- considerable improvement has occurred and I didn’t leave disappointed this time.

All the things that were wrong last time were right this time – while I’d like to think this was because our last review taken on board constructively by MAD and used as a basis for improvement, I know I’m not the only one to have pointed out the shortcomings.

This is a company keen on image but not forgetting the largest part of that involves customers enjoying their time and wanting to come back. This time I want to go back!

I left feeling very full and very happy, not just because I’d enjoyed a very tasty burger, but because I’d rediscovered an interest in the brand and as I walked back to the car I was reciting in my head the half-dozen or so dishes I want to try next time.

Starting with that meatloaf – I’ll be on it like a bat out of hell. 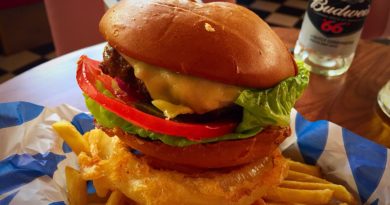