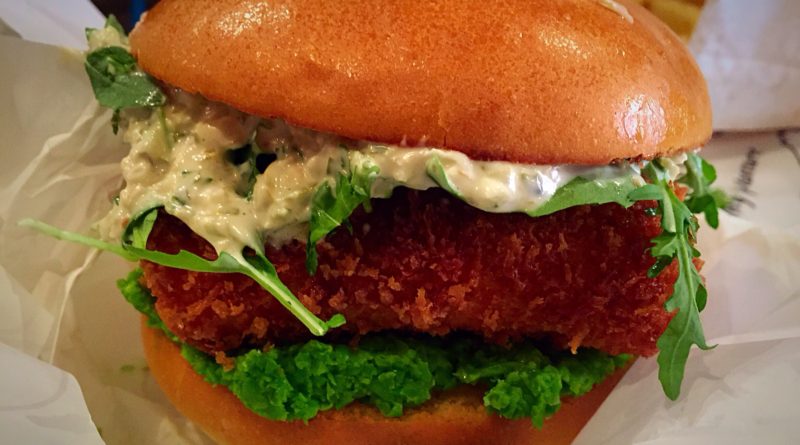 We change our specials on monthly basis. Pop in and check the specials board for a proper filthy treat! Breaded Cod Loin, Tartare Sauce, Rocket and Manchester Peas.

Filthy Cow is a bit like Cheers. They know your name. You’ve been before? You’ll be remembered.

It’s a great place and has a strong identity backed up by great quality produce and a considerable amount of cheeky fun. I’m not going to waffle too much about the place itself, as I’ve covered that in previous reviews.

You order at the bar, sit down, and your burger is brought out. If there’s one thing I’d change it would be to have full table service, including ordering, but I understand the complexities this would bring to a small operation.

One of the greatest things about it is the monthly(ish) special. It allows the limited main menu to be played with, mucked around with and new stuff constantly brought out.

This is burger heaven, and in fact owner Jordan showed me a photograph of ingredients she had bought for a development day with Chef Matthew. I can assure you – there’s going to be some great stuff coming out of this kitchen in the next few months!

Anyway, the latest special is Filthy Cow’s take on the eternal British classic – Fish & Chips. It would be a poor show for the Admiral not to get stuck into something fishy.

I must admit that I was bit uninterested when I first saw it. Fish, by its very nature, has a milder taste and softer texture to either beef or chicken.

However, I’d missed the previous two specials, and frankly, have yet to be disappointed by Filthy Cow (plus they have bottles of the excellent Runaway Märzen beer and today I wasn’t driving!).

Anyway, the current special is one of the few so far to drop the “Filthy” moniker. Jordan explained the story behind this, but essentially it isn’t something that is going to be strictly followed with future specials.

So how was it?

Well, it was better than most fish and chips I’ve had. The crumb on the cod was sturdy and excellent. I mean really good, with a very satisfying crunch to it. The fish inside was also fine – it looked great, good and thick – just see the pictures- but cod isn’t beef and I felt from the outset that I’d rather have beef.

The build in this was precise (consistency is something Filthy Cow does really well) and very simple. So many of the best burgers are.

The rocket was an amazingly welcome relief from lettuce. I’m sure I’ve said before that I actually prefer it to lettuce, with that subtle nutty tone it gives to make everything a little more interesting. It just doesn’t get used enough in burgers.

Apart from the tartare sauce, the other ingredient here was the mushy peas, included presumably to give diners the whole rounded fish and chips experience in a bun.

They certainly added considerably to the aesthetic appeal, as well as a uniquely interesting taste rarely experienced with burgers.

As far as any comparisons with fish and chips go, this construct is way up there. The crumb is inspired and the build gives you exactly a British fish and chips experience, but inside a bun at the friendliest burger joint in town.

It really depends what your comparison is. Personally, although I enjoyed it, I’d far rather have beef in my burger and it did actually take considerable restraint not to order the signature Filthy Beast again. But as far as fish burgers go, it’s the best I’ve had. 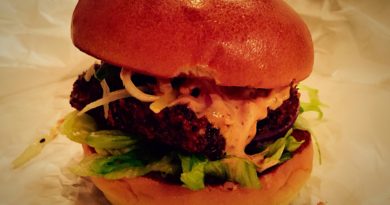 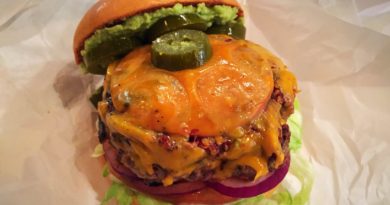 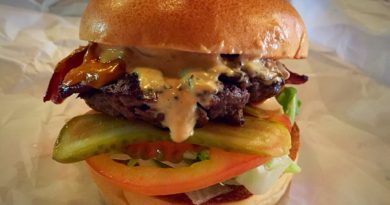