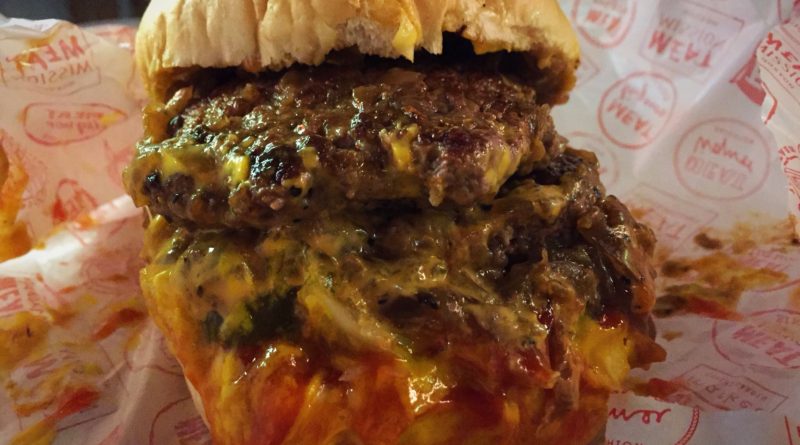 MEAT market is part of the MEAT empire (we’ve reviewed the Dead Hippie at MEATliquor before) occupying a prime spot overlooking Covent Garden.

My first reaction walking in that it’s freezing inside and the lighting is better than MEATliquor. The whole length of the place has sliding windows, which can presumably be opened in summer. Today it’s winter though, and it’s chuffing cold. Made me regret ordering a milkshake.

And that milkshake, a banoffee one, with booze in it, was £7.50. That’s only a pound less than the burger so it better be good.

The burger, the Black Palace was, once upon a time, a secret menu item. It’s either now a full part of the menu or it is London’s worst-kept secret, because it’s written on the wall (where the menu is). It’s a “fairground” type burger, i.e. a cheeseburger with onion, pickles, mustard and ketchup.

What is relatively unique about it is that it is only available at MEATmarket, the only one of the ten or so branches that does it.

Anyway, it arrived on a branded tray with an apology that the milkshake machine had broken, thus saving me £7.50 and a tonne of calories. But that gave a brief opportunity to chat to manager Zaki who is a top bloke and responsible for the cringe-worthy “MM joke of the day” on Twitter.

So, my Black Palace – not a massive burger due to its slim diameter, but that meant perfectly manageable and not too silly.

It’s also not a complicated burger but what it is, in true MEAT style, is a very messy and very tasty burger.

You don’t just get a bit of sauce here. Mustard and ketchup are supplied in overload, hanging out the side.

The simplicity of the red and yellow sauces with the onions worked really well, giving all the traditional flavours. In fact, this did really feel like a good old fashioned burger with modern nudges, which I suspect is the idea.

The double patties were very good. Slightly different in taste to the Dead Hippie due to the mustard in the latter, but not a million miles away and very tasty. The beef had that stickiness between the teeth that often comes with a relatively high fat content, but bear in mind that’s where a lot of the flavour comes from.

The Black Palace is a tasty burger. I’m not sure it can hold a candle to the Dead Hippie but it is better than most.

I also like the casual atmosphere and fun of MEATmarket. I did previously find MEATliquor a bit too self-confident and this joint in Covent Garden would appear to be the perfect compromise.

Black Palace. Tasty simplicity with a good balance of fun and cool.