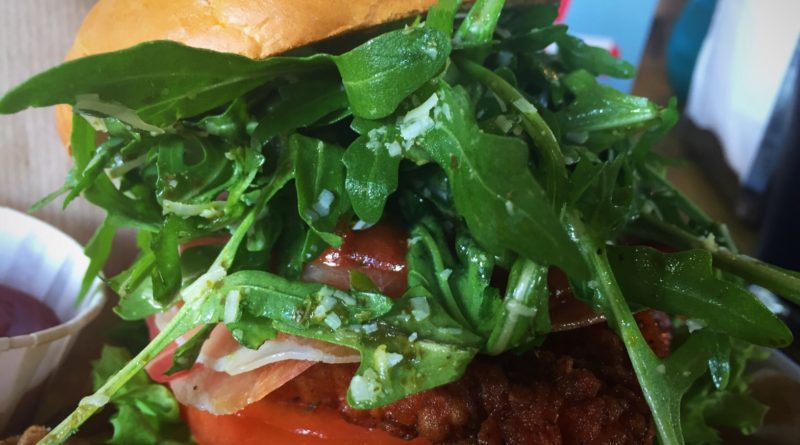 Been here before both on and off the Burger Lad® clock, so I know they do mighty fine chicken, plus it’s a nice bunch of people in a totally relaxed atmosphere.

You can’t escape the smell of fried chicken when you step in, and let’s face it, that’s what we want. But as with the previous review here, my fried chicken is going in a bun and today I’m going a bit Italian.

The Yard & Coop Parma Bird has Italian-esque toppings like rocket, Parmesan, a “mamma mia” sauce (tomato and basil) and of course Parma ham. The latter, rather than just being placed on top of the chicken, is described as being wrapped around it – a nice touch.

In addition to all that, there’s pickle, mayo and tomato (hmmm). And chips on the side, so it’s a pretty substantial amount for £12.

First impressions were mixed. It was certainly a generous looking thing, but with the sheer amount of rocket and lettuce, all I could see right away was green in a bun.

Now, I like rocket, I really do but this could be eased off a little here. Same with the tomato – I know they are going for an Italian job here but this was huge and thick – too much for me, it had to come out.

The last thing in the initial inspection was the Parma ham. Described as wrapping the chicken, it clearly wasn’t. It was folded in half and placed on top. I know this isn’t going to alter the taste but what’s the point in not matching product description to reality.

Lifting it up to my mouth though, I was keen to see how that Parma ham measured up as a burger topping versus its more famous cousin – bacon.

The chicken breast in there, covered in Yard & Coop’s oh-so secret crumb, isn’t small. Like everything else in here it’s kind of super-sized. And jolly good. I like the chicken here. I’ve had it in non-burger for, plenty of times.

The Mamma Mia sauce in the Parma Bird is rather mild and gets a little lost. I might be inclined to pepper it up a touch, just to make it stand out more. But apart from that, there’s texture and flavour a-plenty.

The chicken, obviously, is as thick as it is broad and does stand out with its crispy outside and sticky inside. The lettuce does nothing but the rocket does lend its particular nuttiness to every bite. Hard not to, given the sheer quantity. I like that nuttiness and would choose it over lettuce any day.

And that leaves the cheese and ham double whammy. I’m pleased to say it works well. Again, not overly strong tastes but they do sit on top of the chicken flavour without overpowering it, as ideal burger toppings ought to.

The Italian-ness of the Parma Bird was there but was quite subtle. It’s basically the Fill-It burger with several amendments and improvements and I did enjoy it.

I left happy and full. 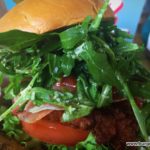 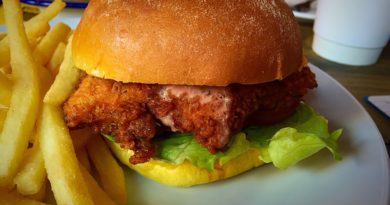 Yard and Coop Fill It Burger