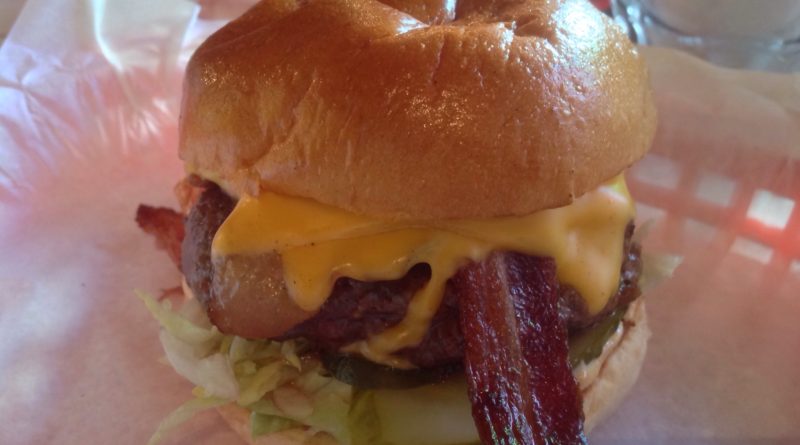 7Bone Burger Co. currently have two locations on the South Coast in Southampton and Bournemouth and as their website states: was setup by Matt and Rich – two hard working guys with a passion for American comfort food and great service.

In the past, we’ve received numerous recommendations to visit this place and as we were doing a Bournemouth Burger Blowout this weekend it was definitely on the BL® radar.

But they don’t take bookings… unless you are a table of six or more.

We’d dropped them an email a few months back trying to secure a table but when we said there were only two of us we never heard anything back. We’ll re-visit this later on in our review.

Anyway at 11:57am we found ourselves hovering outside the doors to their Bournemouth “dive”.

We did wonder for a split second if it was shameless to be queuing to get in here (after all we despise the concept) but a group of 4 doing the same soon changed our opinion on that and shortly after we were eagerly let in.

It could have been about 4 or 5 minutes later that I counted no less than 12 other diners straight in the door and they’d only just opened up – I guess this no booking concept works pretty well. And more and more people kept coming in and soon 7Bone was packed!

Inside it’s got an industrial style warehouse feel to it with open vents, bare brickwork and lots of iron and wood giving the place a stark realness. Everything was clean and tidy and already there was a whiff of awesomeness coming from the open kitchen/grill.

As you know, I always like to plan my order in advance and having seen the Prince Charles is overrated burger on their menu (and Instagram) I was always going to go with this option.

I’m kicking myself now why I didn’t ask why it is called this but put quite simply this is 7Bone’s version of the McDonald’s Big Mac.

This comes with all the components you’d find on a regular Big Mac but with the added bacon bonus so I was very much looking forward to seeing how this premium version would taste.

Now the patty options are as follows; 6oz single (£7), double (£9.50) and diner-style smashed (£7) and I was tempted by a double but with more burgers to follow on this trip I opted for the single.

When placing your order you are told that the beef is cooked pink and the excellent staff here check that is OK for you. Of course pink is OK… after all real men eat pink.

Being a massive fan of a double entendre, I also had to go with a side of Cock Scratchings – would these be yet another notch on the bedpost or would I find myself regretting it the next day? We’ll find out soon enough…

From the time we placed our order to the time we received our food it was ultra-quick. I mean ultra-quick… there was certainly no messing about and the friendly and attentative staff delivered our food with a smile in a speed I was quite in awe of.

Miss Milkshake went with their ‘franks a wiener’ chilli dog today and she’ll tell us more about that later in the comments section. But first how was the Prince Charles is overrated?

Well it looked small but then this is only a 6oz burger but my goodness as you can see from the pictures this was certainly a royal looking burger.

Presentation-wise this was tidy, compact and the brioche had a glorified glaze and was ever so soft and incredibly fresh.

I did go to do a lift the lid shot but it wasn’t worth it as the two slices of melted American cheese beautifully covered up the rest of the ingredients on-board so you couldn’t really see much else.

However, much that I hate to cut a burger in half I did on this occasion just to see that medium-pink cooked beef which did not disappoint. This was cooked to perfection from the team at 7Bone and was tasty, juicy and melted in your mouth.

The bacon was enjoyable, not too crisp but not too “flabby” and really elevated everything to another level.

The iceberg and pickles gave you that illusion of being a Big Mac because the dirty spread is 7Bone’s version of that special sauce.

I’ve made my own before with ketchup, mayo, mustard and grated gherkins and this wasn’t far off that (obviously much better!) and I’m adamant this had mustard in it as it gave a slight kick/sharpness to the flavour. Good. Very, very good!

At £7 and right in the middle of town this is an absolute steal of a burger and calling it an upmarket version of a Big Mac really doesn’t do it justice. Not one bit…

I cannot fault the Prince Charles is overrated, it ticked absolutely every single box and requirement for me when it comes to having a burger, and that fresh, perfectly seasoned beef was an absolute joy alongside the bacon and the other ingredients it was dressed with.

Oh and that dirty spread? Absolutely delicious, and pure filth. We’ll be lusting after that for some time at BLHQ™…

Overall, this was an exceptionally enjoyable and flavoursome burger served up to us today by 7Bone and to be honest I could have easily polished off another one of their tempting 6oz creations.

And this is “fast food” but insanely tasty and very reasonably priced – literally 35 minutes after getting through the door we had paid and were leaving.

And when we left there was easily close to 30 people in this 80-100 cover communal dining establishment (depending on the configuration).

Later on in the afternoon we strolled past and glanced in and the place was completely packed to the rafters.

The staff here are fantastic and friendly and almost scarily efficient. We had a really good chat with a few of them after our meal about the website and they showed loads of interest and enthusiasm so guys we can’t thank you enough for feeding us today!

If you’re in Bournemouth anytime soon or in the near future you won’t leave 7Bone hungry or disappointed. And with an array of burgers, dogs and delights from their Smokehaus there’s more than enough reason to go back again…and again… and again!

I thoroughly enjoyed the slightly salty Cock Scratchings as a light, tasty side. “Similar” to Pork Scratchings but softer and not requiring a potential trip to the dentist after. Totally impressed with these and I wouldn’t be surprised to see some copycats trying this one!

We mentioned earlier that we never heard back from 7Bone when we tried to bypass their no bookings rule and score a guaranteed table.

And our honest appraisal of this policy is that if we had a place that was serving up the standard and quality of the food on offer here today, plus the incredible service we received then we probably wouldn’t reply either.

After all it does clearly state it on the website!!

So make sure if you are going to 7Bone in either of their locations you get there when the doors open as today proved you either have to do that, queue or be extremely lucky and secure a table in this most finest of “dive” eating establishments.

One thought on “7Bone Burger Co. Prince Charles is overrated”