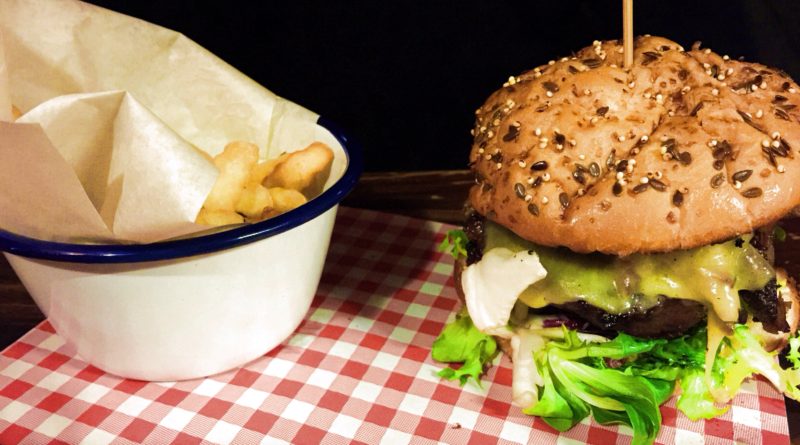 A traditional on trend pub in the heart of Worcester City centre serving real ales, craft beers, batch cocktails & gourmet burgers. We pride ourselves on great service & atmosphere in a friendly, relaxed environment.

We only use trusted local suppliers with a proven track record for delivering the finest quality produce. We don’t do fast food… we do good food fast.

So a rare trip out without MrsVeggieGeek meant that I got to pick a restaurant that is unashamedly not overly vegetarian friendly (although after I showed her the menu, she said that the veggie option actually did sound amazing and asked “when can we go?”)… but would I want to go back and eat more burgers?

Read on to find the answer!

The Pheasant Pub wasn’t ever really known for its food – as someone growing up in Worcester, it always seemed like a lager / sports watching venue.

I was chatting to someone a few months ago about the burger scene in Worcester and he said that the best burgers by far were at the Pheasant. A pretty bold claim!

Looking at the menu and it looked like he may have been onto something – they read really well and make good use of homemade patties, various smoked meats (courtesy of their on-site smoker), and other delicious ingredients… in fact Burger Lad® has had it on his radar for some time.

After ordering our food (and being told that there as a wait due to the big group that had just came in), we took our pints upstairs and found a table.

There was a wait… about an hour in total (although the chef did come out half-way through to apologise)… it was 9pm on a Saturday night after all!

So the food arrived – I had ordered “The Squealer” which is described as “beef patty, grilled chorizo, house pulled pork, bacon & grilled cheese”.

My friend ordered the “Lazy Cow“, which is a double beef patty, smoked beef brisket and melted montery jack cheese.

Both were served in a toasted multi seed bun and a portion of crinkle cut chips.

I’m going to say it now, the chips were superb – amazingly crispy on the outside and fluffy in the middle. Very light and easily the best chips I’ve had in some time.

How were the burgers then?

For starters, they were monsters, towering high (due to the sheer amount of meat inside) and held together with a skewer.

Both came with a selection of fresh salad items – salad leaves, red onion, tomato and gherkins.

The buns were perfectly toasted and reasonably thin compared to buns I’ve had on other gourmet burgers.

The bacon in my burger was a good cut, with just the right amount of fat, and not cooked to an inch of its life.

]Both burgers had a layer of cheese oozing over the burgers. They looked good, but how did they taste?

The burger was large and I cut it into quarters so I could hold it, but it held together really well.

Taking a bite of The Squealer was simply heaven – juices oozed from them meats inside, which combined with the thin bun meant I didn’t end up with dry-mouth syndrome.

The patty texture was amazing – it was obviously a good cut of meat and had been processed to end up with a very fine texture and no signs of gristle or lumps.

The predominate taste was a smoky flavour, coming from the pulled pork and chorizo (which didn’t overpower the burger), whilst the bacon and cheese shone through.

My friend agreed with me about the texture of the patty, but also had said this of The Lazy Cow:

“The patty was peppery and moist, with a great crust, resulting in a fantastic flavour and texture in the mouth.

The brisket offered a good complimenting taste and texture to the patty and was also perfectly cooked.

The whole thing holds together really well and works. One of the best burgers I’ve had in ages”.

The burgers were quickly demolished – probably due to a combination of the long wait (which was the only negative thing you’ll find in this review) and how amazing they were to eat.

Both were filling, but due to the smaller sized bun, I didn’t feel full of bread / carbs, but instead the lovely protein that the meats offered.

On the way out, we noticed this sign…. so to answer to my question at the start of this review, would I go back (and take MrsVeggieGeek)… yes, and on a Tuesday to take advantage of this offer (although I may end up just having two burgers).

To be honest, I would go back any-time, offer or not, as I will more than happily pay £9 for a burger experience of this quality.

Well done to The Pheasant! 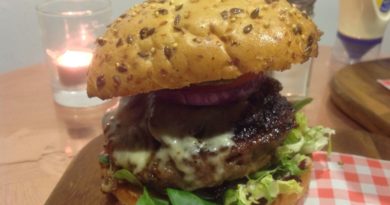