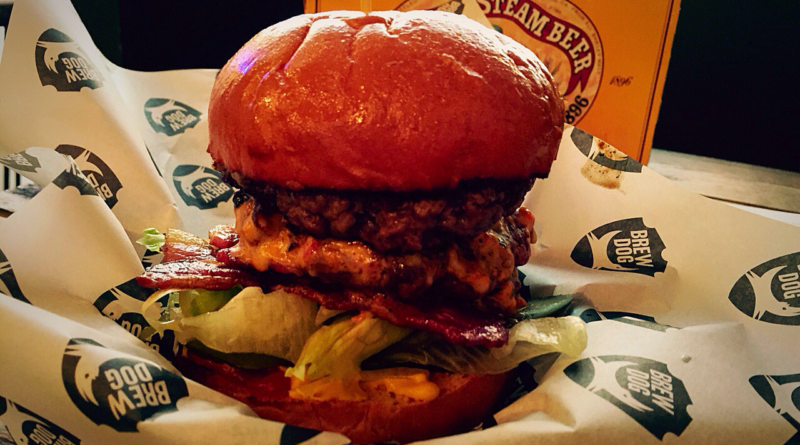 For the dirty burger lovers out there. A patty stuffed with cheese oozing out gooey delicious-ness, topped with crispy belly bacon, and plenty of sauce.

Brewdog is the new (ish) British brewery from the east coast north of Aberdeen, possibly most famous for its arms race against a similar German brewery a few years ago.

The two competed for a while to be the world’s strongest beer, culminating in Brewdog’s Sink the Bismarck at just short of 50%.

Since those heady days, Brewdog has been getting on with expansion, opening branches across the UK where they sell their beers obviously, some merchandise and food.

The super strength beers aren’t on the menu anymore but there are a few burgers, so Britain’s No.1 burger website had to drop in.

The burger menu includes a Juicy Lucy so that’s what I’m having today. The food menu is available at all their branches but this particular one is Manchester. Glass front, high ceiling, it’s an impressive place.

When I was in, it was quite quiet. One table was occupied by a young girl who I assumed was from Brewdog’s head office, as she clearly used some authority over the staff.

Her delightful Scottish twang was offset somewhat by a disappointing use of the F word on the phone as she discussed staffing issues not quietly enough. I feel sorry for Sam and Duncan whoever they are.

And my extremely helpful and friendly waiter was told to stop eating his sandwich at the bar (it was lunchtime), something I found considerably less offensive than the foul language.

Anyway, my burger arrived looking lovely. Tall, with a small circumference, copious amounts of pickle, lettuce and sauce on the bottom, along with glorious pieces of bacon.

The bun was one of those small soft squashy ones with wrinkles all over the top, and it was absolutely fit for purpose. Ideal actually.

Getting stuck in, I immediately got the distinct pickle taste, as well as the bacon.

The twin patties were also lovely and beefy and despite it not being stated, were cooked medium, so lovely and pink on the inside.

I must say, the lack of a molten core was a bit of a disappointment. Cheese between the two parties is surely just a double cheeseburger?

But what a great double cheeseburger it was. I was really enjoying this. The meat itself was not amongst the very best I’ve ever had, but perfectly fine just the same. And two of them with a perfectly pink core each!

The pickles were really quite noticeable here. Not overpowering but very much the dominant flavour and with their crunch, also the dominant texture.

Brewdog is a beer destination, no doubt about it, and I can imagine this place to be pure hoachin’ at weekends and evenings. But the food menu of American-style comfort food is pretty good too. I just don’t understand why they don’t put it on the website.

It was a good burger, enjoyed with a beer. I will have to check with Burger Lad®, the authority on burgers, if melting cheese between two patties can justifiably be called a Juicy Lucy, but on the basis of taste, presentation and the venue itself, it’s a thumbs up from me.