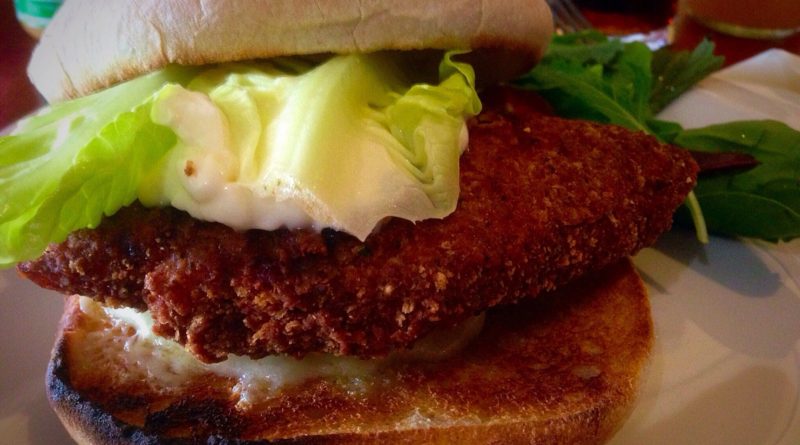 The Brendon Arms serves traditional pub food with an emphasis on homemade dishes and using local and seasonal produce when available. Southern fried chicken burger in a toasted ciabatta roll, with lettuce and mayonnaise served with a dressed salad garnish.

Price: £5.95 for the burger only. Add Davidstow cheddar cheese for 65p.

The location is as lovely as you can imagine a seaside pub in Cornwall. Because of the unique geography of Bude, it’s not quite on the sea, but it is pretty much by the beach (look it up on Google Maps!).

The blurb says it’s been there, run by the same family for 150 years or thereabouts. There are a lot of outside tables making use of the British summer, and inside it’s fairly standard pub decor and fayre.

There’s a few of your typical pub grub things on the menu. The burgers include beef, pulled pork and chicken, the latter of which I decided to have today.

It’s described as southern fried, whatever that means. Cornwall is the most southerly county in Britain, so I suppose it’s accurate.

It’s the usual thing – find a table, choose your food, order at the bar, get a wooden spoon with a number on it, and wait for the food to be delivered to the table.

When it came, on a white plate, I realised chips were to be ordered separately and I hadn’t. But it was lunchtime and although hungry, I wasn’t too bothered about not having them.

It’s not advertised nor priced as a gourmet burger, so that’s probably fair enough.

The bun seemed very standard, almost like a supermarket thing. It did the job of holding stuff in, and it was not terrible, just a bit uninspiring.

Inside, there was some lettuce, which was nice and fresh and crunchy, some mayo, and of course the cheddar I’d added.

The chicken was a good thick breast, pretty succulent (that’s the overused word to describe nice chicken) and had this crispy coating on it. The southern-fried one.

Biting in, and getting past the bun, the chicken was tasty and substantial.

I’ve no idea what the crispy coating included, but it was nice, especially the texture, adding a very satisfying crunch to every bite.

Best of all though was the Davidstow Cheddar. Strong, mature and with a very significant bite. They’d chosen to install it under the burger, with the lettuce and mayo on top.

A big no-no for a beef burger, but with coated chicken it was perfectly OK.

The cheese was wonderful. I think perhaps the whole thing would have been a bit dry without it, so I’m really glad I added it in.

So overall, I won’t have it again. Partly because the A30 getting here is utterly horrendous, and partly because it didn’t inspire me enough.

I shouldn’t like to detract too much from it though, because it was a very reasonable burger at a very reasonable price, and I’d recommend the place to anyone wanting a pint and bite to eat while in Bude, a pretty little seaside town.