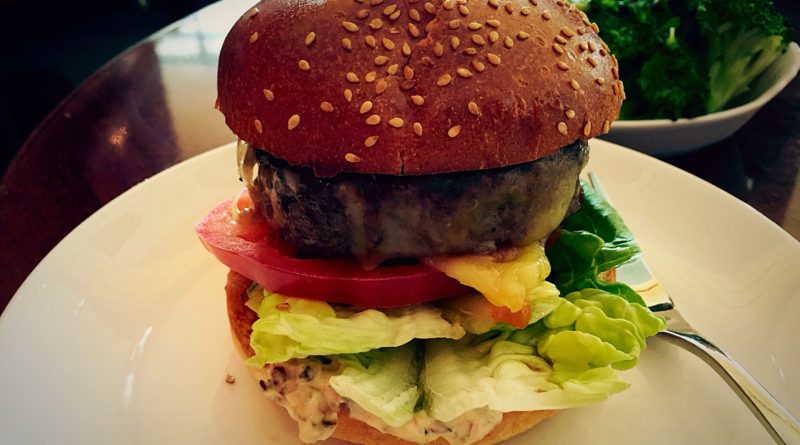 Based in the departure side of Terminal 5 at Heathrow Airport, Gordon Ramsay’s Plane Food is great for pre-flight dining or drinks at the bar. We’re open from breakfast through to dinner and offer express menus and picnics to take on board, for those short on time. Plane Food short rib burger with tomato, lettuce, Monterey Jack and chimichurri mayo.

Well, this is sort of a Michelin-starred burger. It’s Gordon Ramsay’s place at Heathrow Terminal 5. And Mr Ramsay has a few stars!

The prices and layout suggest this is not quite the same as Claridge’s or Hospital Road though. And Gordon didn’t seem to be there. That said, it’s still £12 for a burger, so it’s not too basic either.

It’s a big restaurant on a veranda of sorts, overlooking both the main departure lounge and the outside apron area. It’s a beautiful sunny day outside too, so I’m already enjoying this.

Apart from the tomato, which I may remove, there’s chimichurri mayo. Chimichurri is a lovely flavour. And it carries the Gordon Ramsay name so it ought to be really good.

Having already enjoyed a couple of G&Ts courtesy of British Airways, I’m having a soft drink, and instead of fries, I’m having broccoli with it.

After quite a short wait, my meal arrived looking stunning. I got stuck into the broccoli first and it was genuinely outstanding. So fresh with just a touch of crunch and oodles of taste.

My mouth was watering in anticipation of the Short Rib Burger though. The bun was seeded and shiny, and the whole thing was perfectly round.

Inside the beef was very substantial and it sat on a bed of lettuce and tomato and the aforementioned mayo. It was also adorned with cheese, the sole ingredient atop the beef.

Overall impressive and things got better biting in. The beef was wonderfully meaty – the short rib bursting with a potent savoury hit.

And the cheese, I must admit I didn’t pay attention to what kind it was, but it looked and tasted like some kind of cheddar, and was also very good. You get the drift – everything was very good. Well, almost everything.

As I worked my way through, this burger’s only downside became apparent, and that was that the bottom bun wasn’t robust enough to hold together the contents. Perhaps having the mayo under the patty rather than on the top allowed the bread to become a touch soggy.

Whatever the reason, I ended up with messy hands as it degraded. Deliciously messy hands though. That mayo! This was a good burger and I really enjoyed it.

The beef was the tastiest I’ve had in a while and was extremely generous.

I still wonder what a burger in an actual Michelin-starred restaurant might be like, but until the day I find out, this will do just nicely.