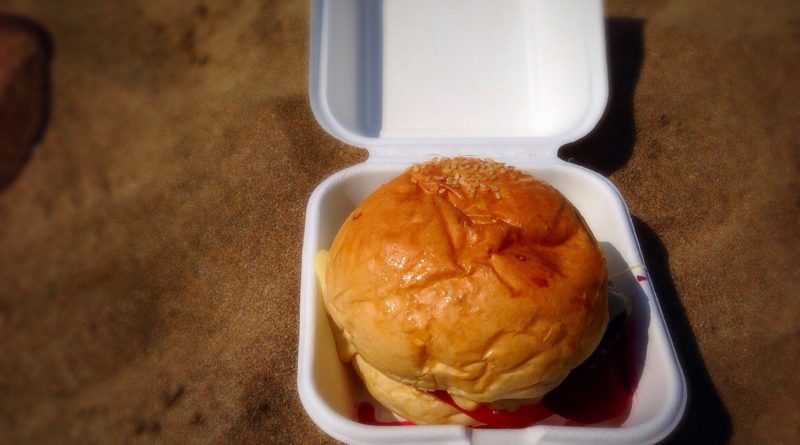 Firstly, let it be said that this was never intended to be a burger destination.

Cornwall in the summer – it was a beach destination. It just so happened that a rather nice burger was there to be eaten as well. Added bonus!

It was a very busy beach on a hot day. Bude itself has plenty places to eat and drink of course, but at the beach area itself, there’s only really one, the somewhat predictably named Life’s A Beach.

A cafe/restaurant/grill with a terrace overlooking the bay, and catering to probably the majority who want to take away their purchases to their complicatedly built windbreaker compounds on the beach.

It’s a basic place, but I was over the moon firstly to see the choice of burgers on the menu, and secondly, even more so when I bit into the thing.

The blurb on the menu focuses on the local beef and the glazed bun. These were both stand-out attractions on this burger.

Because I’d chosen takeaway, presentation was in a polystyrene box, which is not terrific, but extremely practical.

The burger I chose was the Kiwi Burger, which is basically a bacon cheeseburger with added beetroot and egg. I dislike egg at the best of times, and especially on my burger, so I asked for it without that.

After carrying it back down to the beach and opening it for inspection and photographs, I noted the cheese was extremely generous. The bacon and beetroot was noticeable too, as was the lettuce and a massive slice of tomato.

I left the tomato in to begin with, but after a couple of bites, it came out, reminding me why I don’t like big bits of fresh tomato. The rest, however, was really very good.

Top marks to the beef. It was very tender and very tasty, and with its thick cloak of cheese, was a bit of a sensation.

The bun was just about perfect. It looked shiny and enticing, it was just the right size, has a lovely springy texture, and tasted great. It also held everything in right until the end.

The cheese was, as I said, liberally applied. It wasn’t, however, as mature as I would like, and didn’t have enough bite. Almost, but not quite.

The beetroot was a great little gimmick. Not an overpowering taste, but just enough to mix up the flavours a bit and make it obvious I was having a special kind of cheeseburger. (BL® note – in Australia and New Zealand beetroot is almost a staple on a burger).

I finished this one in record time. Partly the running around in the breakwater with the kids, working up an appetite I suppose, and partly the sheer enjoyment of it.

If there was a medals table for this experience, I’d give bronze to the bun. It was just an ideal burger bun.

I’d give silver to the meat. Not the absolute best beef I’ve ever had, but right up there amongst the stars.

Gold medal, and I’m quite sure the owners would concede this, goes to the location. Bude’s Summerleaze beach is quite stunning, on a hot day like this that could easily pass for the Côte d’Azur.