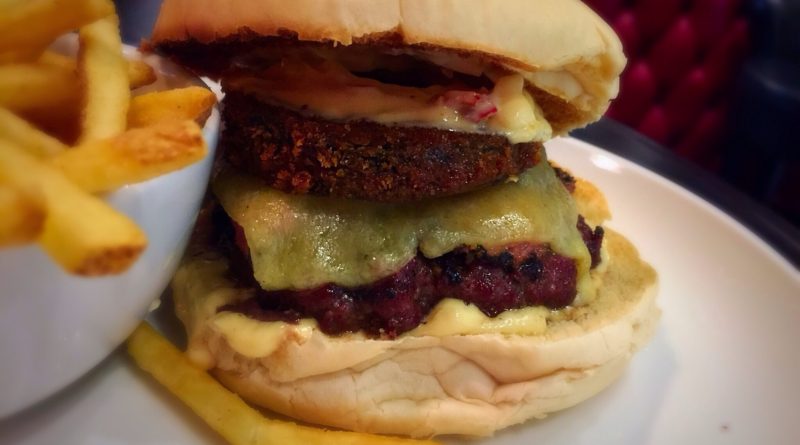 Back to Solita, this time with Commodore Jr. in tow.

Solita has a small children’s menu at reasonable prices, and while the young Commodore was disappointed there was no spaghetti option, the choices were OK, and he got a decent piece of grilled chicken with sweet potato fries, all of which was devoured.

As for moi, in the words of Leonard Cohen, first we take Manc-Hattan, then we take the world!

The world will have to wait for now, so first things first.

I’ve had a burger with black pudding in it before, at Bleecker in London.

That was a very tasty burger, but rather off-putting in my view as it is cooked a bit too rare.

At Solita, the beef isn’t rare and in this one the black pudding is fried in Franco’s panko. In further nods to the great county of Lancashire, the cheese is local and the bun is an oven bottom roll, and there’s Lancashire sauce, whatever that is.

The New York aspects come in the form of pastrami and mustard. All in all, a substantial offering.

As we waited, we enjoyed the friendly hustle and bustle of the place. It was the NQ branch today and I’ve covered the venue in previous reviews.

It arrived, looking suitable enticing and I was keen to get stuck in.

With the first bite, I decided any further comparison to the Bleecker Black was out the window.

This was a far more layered and complex beast (and I wasn’t sitting outside in the freezing cold to eat it). It really is beginning to look like the UK’s second city is overtaking the first city on burger innovation and taste.

With this one, in the battle of Manchester vs New York, New York won quite decidedly. The mustard and pastrami were the dominant flavours and that is a good thing.

The oven bottom roll was a truly treat enclosure for a burger. Why it’s not used more often, I have no idea. Second only to a soft Scottish morning roll in my view.

Inside, the medium cooked beef was tasty as usual, courtesy of Solita’s Inka machine. Cannot fault it.

The cheese was quite mild, adding more texture than taste. I’d have perhaps preferred more bite, but then it wouldn’t have been Lancashire cheese and the theme would’ve been lost.

As it was, the cheese was fine. There were plenty other tastes bouncing around in here.

The unique taste of the pastrami on this made a pleasant change from my beloved bacon. It was squashed in between the beef and the black pudding.

And that brings me to the black pudding itself.

Encased with a satisfying crunch, courtesy of the panko, it is a unique and not at all unpleasant taste. Just don’t go on YouTube looking up how it’s made!

I certainly wouldn’t have it very often, and probably not on its own, but it set this burger off well.

This was another thoroughly enjoyable burger from Solita, the captains of innovation. 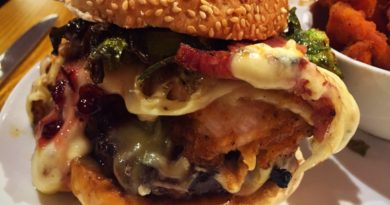 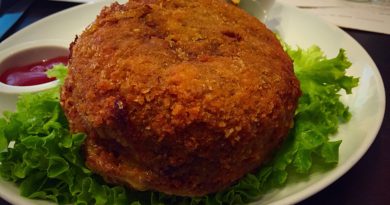