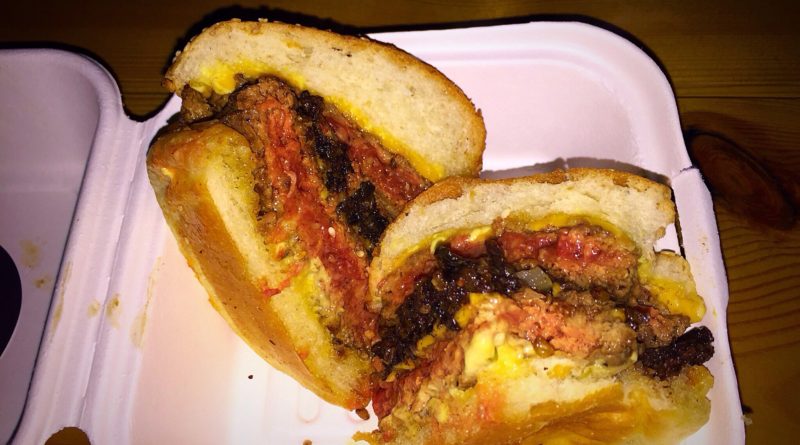 Bleecker St. Burger is a food truck, bringing New York style burgers to the streets of London. The meat is aged, the buns are toasted, the cheese is American, the sauce is secret and the fries are hand-cut. We are coming for ya Londoners.

Bleecker Burger is one of those burger places (well, van, really) that pops up with considerable frequency on social media. Some sort of back story about New York. Obsessively popular, and therefore fantastic, right?

It is a burger van, not an indoor joint. That’s New York style apparently. I’ve never been to The Big Apple, but do they all prefer eating outside in the bitter cold, in the dark, and surrounded by smokers?

Because I didn’t. And I just couldn’t get my photos to come out well either (I apologise for that). Either far too dark, or using my flash and sticking out like a sore thumb. And speaking of sore thumb, it was so perishing that my fingers were aching to get back into their gloves as soon as I’d finished.

Outdoor eating is fine in the Caribbean or Thailand, but in London (or New York for that matter) in the winter, absolutely no thank you, not again.

Anyway, the van has a small menu of cheeseburgers, including their Bleecker Black, which is a double cheeseburger with a thin amount of black pudding in the middle, and a conservative dash of onions. This is seemingly an award-winning burger so I had to try it out.

Service was rather on the surly side, like the chaps in the van didn’t want to be there. Perhaps they were freezing too. People crowding round, no obvious queue, some waiting to order, some waiting to collect.

I was told it is done medium rare, which is fine by me. If I’m honest, it seemed rather more on the rare side, probably the pinkest beef I’ve ever had – you might just be able to make it out in the photos.

As I waited, I was lucky to get a seat at one of the three (!) tables there. Coat was most definitely staying on, as was scarf. Gloves had to come off for obvious reasons.

It took a while, during which time a large group of trendy youths were milling around me, drinking and smoking. No burgers apparently, which seemed odd. One of the group had, and I say this not in jest, the single most irritating voice on the planet, and was loud.

My experience was not going well at this point. Not at all. If this is the true New York experience, I’ll go to Maui instead.

My number was called and my order appeared. Polystyrene box.

As I took it back to my seat (where I had temporarily deposited my coat to try and insure irritating-voice man and his chums didn’t pinch my seat), I got a whiff of it. Suddenly, the experience was improving.

What a divine, amazing smell. The meat, the cheese, and most of all the black pudding. This was quite pleasant.

I think I was beginning to imagine where the awards came from, and I hadn’t even tasted it at this point.

I opened up my box and was greeted by a burger on its side, cut in half. Cross-sectioned ready for photos it would appear. A burger of the Twittery-bloggy generation. If it’s not done to increase the impact of the inevitable photos shared on social media, then I can’t think what the point of doing this is. It’s certainly different.

It looked really good though. Not very big, but substantial enough. I didn’t want to stay for ages anyway.

I picked it up and it was very greasy. This was evident all over my pen afterwards as I made the notes you are now reading. That’s not automatically a bad thing and I had high hopes.

Apart from the black pudding, there’s not a lot going on. Just simple ingredients, and that is my favourite type of burger.

As I took my first bite, my high hopes were instantly realised. It was so soft, melt in the mouth stuff. Forget about the black pudding for a moment. The beef itself was really good. So much so that I’d happily recommend their other cheeseburgers without actually having tried them.

I definitely felt that I didn’t need the black pudding, but my day was all the better for having it… and it does set it apart from the competition.

The smell, most of all, but also the taste. A guilty pleasure, absolutely. It worked so well with the soft, melty dreamy beef that every bite was a pleasure. Plus, it was keeping my hands warm.

And refreshingly there was no tomato (“tomayto”, I suppose, if we’re having a proper New York experience), nor mayo, nor lettuce. Nothing to get in the way and interfere with the harmony. Even irritating-voice had blended into the background.

I can definitely see why this burger and this van are so popular.

From a personal point of view, I’m really torn. Eating food with the whiff of cigarette smoke all over the place reminds me of the downsides of the 80s, and I really hate eating in the cold in any decade. It felt one very small step up from camping.

Did the quality of the burger negate the bad experience?

Probably, just. It’s probably seen by some as cooler (by me, quite literally) to eat from a van rather than a proper indoor establishment, but I’m sure there are indoor burger places in New York too.

I’d love to come back here, either for the Bleecker Black again, or the bacon cheeseburger.

But I’d do so in the summer. 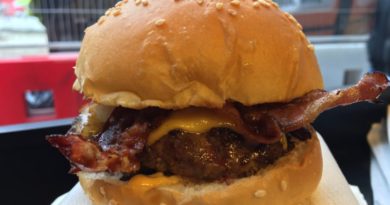