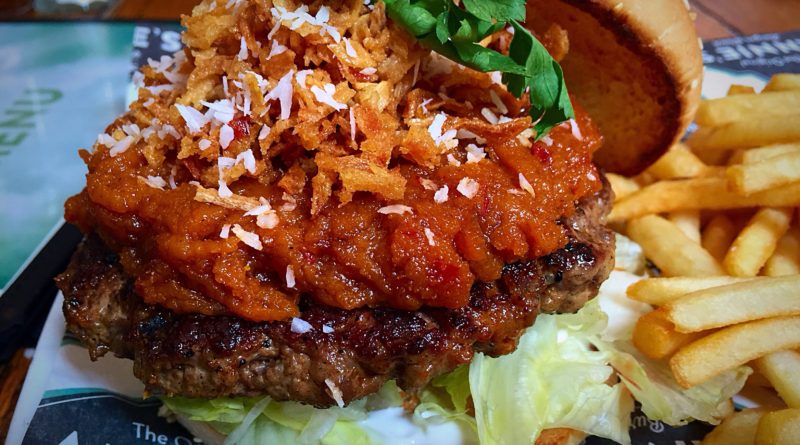 We make authentic Rhode Island style burgers. Our Meaty burgers are a delicate mix of prime Beef (85%) & Pork (15%) mince from the most select farms in the East Midlands. The Kogumaza – A burger slathered with homemade Dutch-Indonesian peanut satay sauce, topped with traditional crunchy onions, a pinch of coconut, all finished off with a fresh coriander garnish.

Almost hidden in a quiet part of Nottingham, Annie’s is extremely popular. How do I know this?

Well, the place is surrounded by what looks to be nightclubs, and as such, there’s nothing else here. And despite that, ten minutes before the doors open, there’s a queue outside.

One of my pet hates about burger places, but there’s no denying it’s a sure sign of popularity. We are talking Patty & Bun levels of lunchtime popularity here.

So, doors open and in pile the crowds. Knowing that I’m going to be pushed for time, I’d ordered my burger before arrival so hopefully there’s not too long to wait.

There’s a lot of staff on and Annie, the owner is bustling around the bar. It’s a spacious room with 220 covers according to the sign on the door.

This is a weekday lunchtime. I can imagine it being indescribably busy here on evenings and weekends (a fact later confirmed by Annie).

The burger I’ve chosen is described as Dutch-Indonesian, although I tend to associate satay more with Malaysia.

Along with the satay sauce, the burger is topped with crunchy onions, coconut and coriander.

As I wait, I scan the menu. And I scan, and I scan some more. It’s massive, it runs to three pages. And this is apparently the shortlist from Annie’s original ideas. Incredible!

Unlike a lot of burger places, Annie’s makes the effort to describe the burgers in the menu preamble. And it reads like a homemade passion rather than marketing blurb.

That’s not to say someone with a marketing head hasn’t had some say here though. There’s distinct branding – the black diamond logo is everywhere inside and outside and they even sell branded merchandise.

Anyway, in that blurb it’s explained that the burgers include mostly beef with a bit of pork and a touch of paprika, making them rather unique.

Having ordered in advance, I knew I was getting a burger without cheese, which would normally cause me some hesitation. But satay on a burger was something I had to try.

Inside the toasted seeded bun was lettuce, tomato and mayo on the bottom. The unique patty sat on this bed, and plenty of satay sauce was indeed slathered across the top, with coriander on top of that. I couldn’t see the coconut.

Oh, there was a real flavour bonanza going on in here.

At the bottom, the three ingredients each lent a subtle hint of flavour. Not much but that’s not why we’re here.

Although I couldn’t see the coconut, I got a taste of it, very slightly giving a tropical experience. The coriander was the opposite. I could see it but couldn’t taste it. Perhaps a little more would’ve helped.

Coriander is one of my favourite cooking ingredients, along with garlic. It makes everything taste so fresh and I love that they’ve paired it with the satay.

The key component on this burger was obviously the satay sauce. I’ve had more than my fair share of satay skewers in the hawker stalls of the Klang Valley and this didn’t quite match up.

But it was pretty damn close I must say, bearing in mind it’s a Rhode Island (which isn’t an island) burger joint in Nottingham rather than a family stall in a Subang night market. I suspect even though it is a topping on only one burger, some considerable thought has gone into making it great.

And that just leaves one component. The patty. Beef and pork together, who’d have thought.

Now, first things first, the pink colour came from the paprika, not the cooking. The patty looked to be well done and I’d have liked to have had the choice of medium.

But that is a very minor grumble. The taste was really very, very good. Peering in closely, I could see the tiny pieces of fat glistening. The meat / fat mix was spot on, lending the meaty tones of the two components to the palate.

Before I left, Annie came over for a chat and showed me around. She explained how the business began as a pub residency and now she’s taken on her own premises, a former nightclub, and a linen mill before that.

I got a tour, taking in the large cellar bar area, and learning about how every piece of decoration, every plank of wood came to be put in by friends and family. I semi-jokingly suggested that the brand was ripe for further branches in the likes of Glasgow, Manchester and London, to which she responded “we’re not there yet”.

Maybe not, but with no end to the popularity in sight, it’s not particularly far-fetched.

Nottingham may not necessarily be the place you might think of while composing a list of Britain’s best burger joints, and Annie who is so overtly American, might not enjoy being labelled British. But the fact of the matter is that Original Annie’s Burger Shack is an absolute must on any such list. There’s nowhere else quite like it.