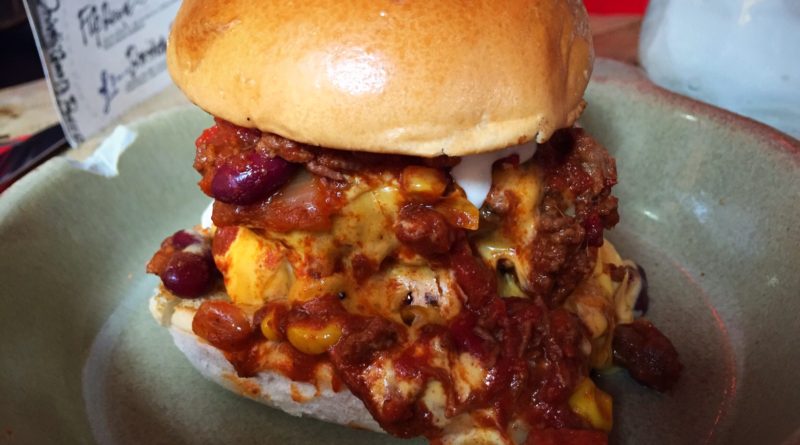 Our signature Juan burger is made from hand smashed minced steak spiced with fresh erb & spices & comes with a spork and bib on the side for misdemeanours.

Hailing from the Almost Famous stable, Liquor and Burn is the (pseudo) Mexican place that occupies the same location once held by Socio Rehab, the Haçienda-esque venue that began the journey.

Above it is the original Almost Famous and along the road is the original Home Sweet Home, with Keko Moku tucked into the remaining corner. Keeping it in the family. And it’s now Liquor & Burn’s turn to get the new menu treatment.

There’s also a more sensible Sloppy Juan that is basically a double cheeseburger with brisket chilli and a number of Mexicana-type touches.

The “signature” patties are also seasoned with an undefined selection of herbs and spices. They aren’t, however, offered medium. As with Almost Famous, the new “rules” mean it’s well-done or nothing. Very disappointing, but no point labouring that issue – it’s sadly exactly what I expected.

As ever here, it was busy. At lunchtime, the larger upstairs space doesn’t seem to be open and in fact they actually turned away a group of eight rather than seat them upstairs. I guess you can do that when you are popular and famous. Within ten minutes of opening, all the downstairs seats were taken.

My burger arrived in a glory of cheesy meaty smells and colours similar to Almost Famous. The size isn’t huge, but the presentation is all fun and expertly imagined.

I’d never really considered the size to be an issue before, actually, but little by little they do seem to be getting smaller. I wonder how much smaller they can get before we need to call them sliders. The £10 price doesn’t seem as much of a bargain as it used to be.

Anyway, the taste is what wins me over here. The two well-done patties were predictably not as juicy as I’d like but they did have a hint of pink in the middle so that’s some saving grace.

The palate was dominated by the spice here – not a fiery trip to hell, but a building heat that was frankly delicious. Lots of textures in here, chief amongst which was the soft stickiness of the kidney beans in the brisket chilli.

That brisket itself didn’t really come through too strongly – in terms of meat it was the two patties that were most prominent. But the lime really did shine and my goodness it was unique.

Giving a palate-cleaning freshness to counter the chilli and cheese onslaught, this was a revelation – subtle but definitely present. I would shake the hand of whoever developed this wonderful stuff.

As I got through it, the texture was overwhelmingly soft, with an occasional crunch from the jalapeños, and I wondered if a few nacho shards wouldn’t go amiss here. Certainly wouldn’t be the strangest burger topping imaginable, especially by Almost Famous standards.

There was a predictable amount of slop which I collected up using my fork (no spork provided, despite being mentioned in the menu). I finished it in no time at all – something this tasty and this small is never going to last long.

It’s a wonderful new addition to the menu here and totally fits with the Mexicana theme. I can thoroughly recommend it, but if you are more than just a little hungry, you probably need to marry it with the fries or nachos, although that does of course push the price up.

Whilst the negatives cannot be ignored entirely, they aren’t specific to this burger.

The diameter and the cooking length are more issues relating to Almost Famous as a whole, and setting them to the background, this is otherwise a stunning burger, with the aesthetics and the flavours offering something truly unique, delicious and jaw-dropping. 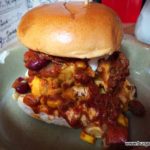 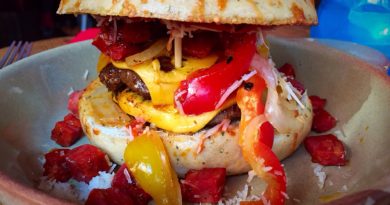