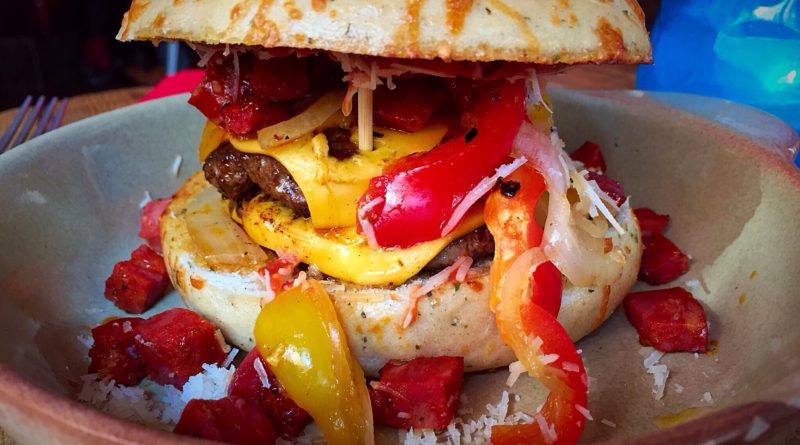 LLLB (if you think I’m writing out the whole thing every time, think again) in Manchester’s Northern Quarter, is part of the Almost Famous empire.

Essentially a taco and burrito joint, they do have a selection of burgers, some borrowed from Almost Famous upstairs and others, like the one I’m having, unique to LLLB.

Inside, the place is decked out rather like the menu, with random bits of scribble all over the place. It’s trying hard to be a lot of fun and it probably is. I’ve already resolved to come back and try out some of the Mexicana another time.

But onto the East Coast Hustle. Firstly, I’m assuming the East Coast is referring more to New York, Philadelphia and Miami, than Dundee, Whitley Bay and Margate. Secondly it is full of adjectives and ingredients, like the rest of LLLB really.

For example, it’s not just butter, it’s wonderbutter (garlic BBQ butter), it’s not just a bagel, it’s jalapeño cheese bagel. This is rather symptomatic of the world these days. Everything needs an adjective, some kind of description.

Yes, I did. A burger in a bagel – this will be interesting. And it’s not just a burger anyway, it’s a double cheeseburger.

And the toppings? The aforementioned smoky garlic wonderbutter, chorizo, peppers, onions, covered in marinara and parmesan.

So, a bit of everything. Well, no mushrooms. Sorry, Burger Lad®.

As you’d imagine, I was hungry just reading the description. A short wait as people began to trickle in and the trendy young staff bustled around. A short wait and my bagel burger arrived in all its glory.

As first impressions go, this was up there amongst the best. The cheesy bagel was striking and smelled fantastic, and the colourful pepper and chorizo chunks made quite a feast for the eyes.

I tucked into a few of the chorizo chunks first and got that lovely salty hit that these kinds of meats give. Another deviation from bacon.

I was pretty desperate to pick this up and get stuck in. When I did, I realised that the bagel had quite a bigger circumference than the patties. Little danger of any slide here.

The bagel gave a very unique experience. More substantial than other types of bread, and the cheesiness of it was very noticeable.

Inside, two thin-ish patties with no pink that I could see. That was a bit of a shame.

The other shame I felt was the dryness of the whole affair. I was offered sauces with it at the outset and I wish I’d taken them up on the offer. Somehow the American cheese and marinara weren’t able to overcome the overall dryness.

That said, it was hardly the Sahara. There was plenty of flavour in this thing. The beef, although cooked longer than I’d have liked, was well seasoned and enjoyable throughout.

The marinara worked with the peppers and, to a certain extent the chorizo, to give a slight pizza-esque tease.

Is it a burger, a pizza or a bagel? Well a bit of each actually and I think it is safe to say the show belonged to the very generous chorizo offering.

Would I recommend it? Well yes, especially at £8 it seemed very substantial and tasty too.

As for having it again, well let’s just say the table next to me had burritos and they looked bloody fantastic, too. 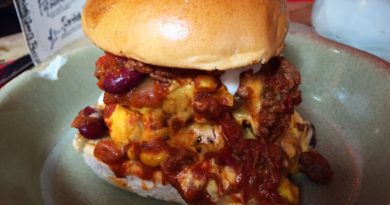