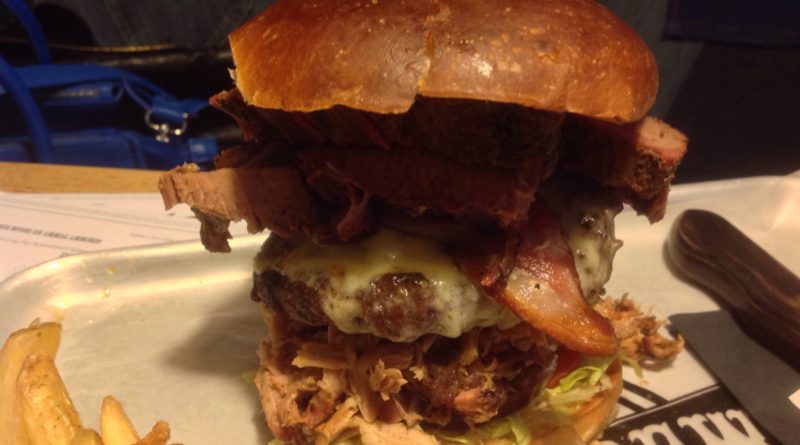 Our burger patties are made in-house to our own recipe, using only 21-day aged Herefordshire beef and are served on brioche buns with fries, lettuce, tomato and homemade pickles. A BBQ extravagance… Our house burger, pulled pork, sliced brisket, smoked bacon and cheddar cheese.

We were first put on the scent of the Hereford burger scene a few months ago by one of those friend/colleague hybrids that pop-up throughout your working life.

The recommendation was for another establishment known as A Rule of Tum but after a bit of digging I stumbled across BBQ’s & Brews, which is fairly new having only recently opened in September 2014.

Hereford has got a bit of a burger revolution going on at the moment.

This was recently confirmed when fellow Hereford-based The Beefy Boys finished as the second best burger team in the world at the World Food Championship held in Las Vegas, USA.

So in sub-zero temperatures we made the near 75-mile round trip from BLHQ to BBQ’s & Brews and it was the lure of the menu which made this our first destination to a city I’ve not visited since December 1999, when Hereford United held then Premiership side Leicester City to a 0-0 draw in the FA Cup.

In fact, prior to trading in football for beef and cider I’d often be in town knocking a few past Tupsley Pegasus or Hereford Lads Club so the area is not completely foreign to me. But enough of past glories let’s get down to business.

We’d booked a table but arrived early for lunch on Monday and so close to Christmas I wasn’t expecting it to be that busy. We walked into the bar area and there was a crowd of gents with a few drinks and we sort of stood there looking a bit lost.

Nobody greeted us so I announced to a guy walking past we had a reservation. He did explain that he worked there but wasn’t on duty and directed us to the dining area where someone would show us to our table.

We almost got the feeling they were a little surprised that people wanted to eat so early but it was clearly after midday.

As it was “early” no other diners were in the restaurant so we had the pick of the tables and opted for one in the corner, I’ll mention why this particular table wasn’t my best choice ever later on in the review.

There’s cowhide and chequered fabric about the place and old bean tins housing an array of sauces are on the tables. A real American Texas Steakhouse vibe with a mixture of Blues and Country and Western tunes to get you in the mood.

I counted roughly 120 covers in here in total and as the day progressed a respectable number of diners joined us for some very tempting sounding menu items.

Here you can order a steak, burger or sandwich (the Elvis with Smoked bacon, smoked maple syrup, banana and peanut butter might tempt you). They also have a fine sounding list of BBQ meats from the smoker including ribs, pulled pork, beef brisket and beer butt chicken.

And you’d be crazy not to give one of these meat feasts a try. After all, Herefordshire beef is one of the finest and at BBQ’s and Brews this is supplied by Neil Powell, part of the H.J. Edwards Master Butchers Group. Good stuff.

I’d already made my decision though… why choose when you could have the lot? And on a burger too!?

So I went with the BBQ Pit Burger – a semi-terrifying sounding meat stack of house burger, pulled pork, sliced brisket AND bacon. Oh and cheese as well…

We ordered a starter of pork crackling pencils which unfortunately they didn’t have any of today so opted to share some Dynamite Beef Chilli.

This arrived fairly promptly but it was a little disappointing to be honest.

It was described as coming with fresh coriander which was definitely missing and it just seemed a bit bland really, almost like it was catering to the unadventurous.

Now when I eat out I want something better than myself or Miss Milkshake can make at HQ but on this occasion it wasn’t.

My only other negative observation was the door at the back of the restaurant where we were sat next to. People kept coming in and out of it (all would be revealed later) but every time this happened you were blasted with a chilly air which didn’t leave in a hurry.

Yes I know I picked the table but in theory this could have been anyone sat here and they would have felt the cold too.

Moving on quickly I was soon presented with what I can only describe as my opponent this lunchtime. When I stood toe-to-toe with my foe, I knew having the Chilli before was definitely not a good idea!

Behold the BBQ Pit Burger in all its glory…

OMG this was HUGE and is quite possibly the biggest burger I’ve tried to eat in my relatively short burger reviewing career.

There is physically no chance of you being able to get your whole mouth around it (unless you’re a snake) although I did give it my best shot, much to the delight of Miss Milkshake and the on-looking waitress. And this isn’t even one of their challenge items! (see ‘The Mountain’).

I’m not even going to talk about the buns on this one because quite frankly they never stood a chance… I would love to have had some scales on me to see how much this bad boy clocked in at.

My goodness this was big.

In fact, you can only really call this a burger because the meat is housed within two burger buns otherwise it should be re-branded as a meat pile.

The sliced brisket is wonderfully tender, smoky, and herby and it’s got that beautiful coloured crust/ring on it which Guy Fieri would be all over like a bourbon glaze. Brilliant. Can’t fault it one bit and the brisket alone would bring me straight back through the door in an instant.

There’s a real depth of flavour going on and it’s because the meat is lovingly prepared and cooked (for 12-14 hours) in the smoker out the back (that’s what was through the door!).

The pulled pork is good, I didn’t like it as much as the brisket but it was flavoursome and had a good texture going on (I’ve had some which has been a bit slimy).

This definitely had a different spice rub used on it which I could tell from the taste (and was confirmed later) and the flavour was more subtle than the beef. Still very good though…

There’s a ridiculous amount of meat goodness on the BBQ Pit Burger and up next in our appraisal is the house burger.

This is made from 21-day aged Herefordshire beef and is a good, respectable patty. Meaty, juicy and cooked with a splash of pink and with a pleasant char-grilled taste but without feeling burnt.

Not on the scale of Longhorn or burgerworks in my opinion but still very commendable.

While we were eating the door opened again, this time we were compensated from the cold with a splendid whiff coming from the smoker. And later on after we had finished we got a personal tour of the smoker and see and hear about the process they use to cook the wondrous array of BBQ they are serving up here at BBQ’s & Brews.

Back to the Pit Burger… the bacon is there, vying for position amongst the other meat mayhem going on with this mighty burger.

I’ll tell you now this is not one for the faint hearted or if you’re a greenhorn.

And don’t expect to eat this like any conventional burger because it ain’t happening… this is a divide and conquer burger or eat from within – either way it’s messy, tasty and a whole lot of fun!

Eating this I bypassed the meat sweats and went straight to a meat coma. And I’ve never, ever said so many profanities while eating and that’s no exaggeration.

I loved the small side of pickles and the skin-on fries were great but sadly I couldn’t finish all of what was on that tray today.

“We’ve got a man down here on table 11… there’s been a meat massacre.”

This place is so American you almost expect to see Dolly Parton sat in the corner tucking into a Beef Brisket Plate (just not this corner as that door makes you very cold!!).

The attention to detail inside is incredible, very, very stylishly designed and it’s not often I’ll mention the Gents in my reviews but the urinals were cut away beer barrels. Pretty cool but just don’t go swigging out of them!

BBQ’s & Brews also offer a very good sounding kids menu priced at £6.95 for three courses so if you are ever in Hereford we’d seriously recommend visiting here as you will not be disappointed.

The service gets a “good, could do better” mark from us and that blasted door was a pain.

But you have to trade that off with what comes out that Southern Pride Smoker and believe me when I say it is nothing short of spectacular.

People (mainly my Dad, who actually started his working life at Special Metals Wiggin Limited) would say fourteen quid for a burger and chips is expensive.

Well… look at the amount of food on the plate. I could have skipped breakfast, I certainly won’t be eating dinner and this has fed me very, very well.

So is it that bad value?

And when it’s using such quality, locally sourced meat and has also been lovingly prepared and slowly cooked then who am I to argue with £13.95?

We even spotted a beverage being served up in a Jam Jar (we’ve seen this before) and we heard a person’s voice in our heads say “they’ve been doing that in America for 10+ years” and had a chuckle.

For delicious BBQ food, good burgers and a wide selection of American Craft Beers, Cider and Cocktails you really should head to Hereford soon and check out BBQ’s & Brews, one thing we can guarantee is that you will not leave hungry!

For the love of meat… I need a lie-down now.