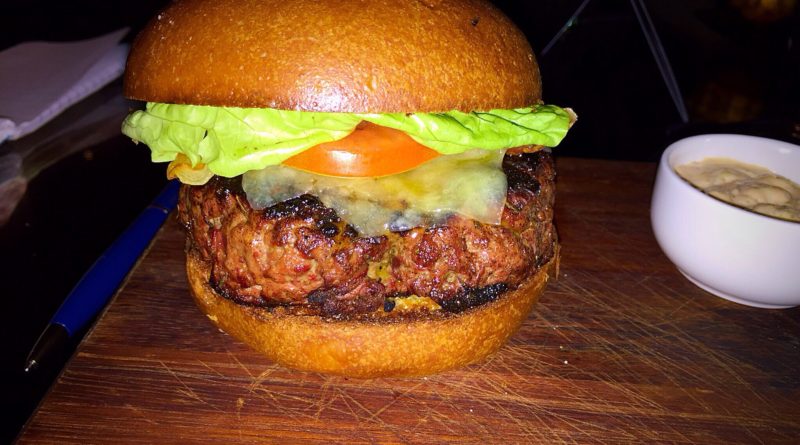 It’s a dirty job but somebody has to do it…

You will struggle to find a more comprehensive selection of burger reviews in the UK, across both geography and price ranges.

But this one is probably a bit unique. It’s the burger served at the Playboy Club on Old Park Lane in London. Burger, beer and bunnies. What more could an old seadog ask for?

Outside, it’s a bit unassuming. A low-slung building that looks like a 70s office block, notable only for its black cladding, pink lighting and of course the famous bunny ears.

I am expecting a stunningly attractive burger here, so let’s get stuck in.

Well, I got in and was given the tour. Downstairs, upstairs. Private members areas, ancient cognacs, massive champagnes. High-rolling casino tables.

As for the iconic bunnies, I’m to be disappointed it would seem. Lots in the gaming room, but in the bar only one whose costume, apparently, is unavailable / not ready.

As a result, it could almost have been any bar in any place. I am attended to by a man in a suit. Immaculate customer service, incredibly welcoming etc, but not a bunny.

Shame, really, because it is actually a pretty great place.

Anyway, I had a conversation with the host about the drinks. I decided against the bottle of Johnny Walker 1805 for £90,000, and Napoleon’s own cognac for even more still, and had a beer.

As the bar is run by the famous Salvatore Calabrese (who, like the bunnies, wasn’t there), we talked about the breakfast martini. He said there’s an even more popular drink at the moment – the Spicy Fifty, and brought me a free sample.

I know I’m here to talk about the burger, and we’ll get to that, but my god this was a good cocktail. Vanilla vodka, honey and some other stuff. I’m not usually keen on cocktails but this was rather nice.

I was asked how I wanted my burger – with added cheese and bacon and cooked medium.

The burger comes with fries as standard, but cheese and bacon are extra. No brainers as far as I’m concerned, but let’s see if the whole thing lives up to the price and overrides the disappointment in lack of bunnies.

When it arrived, it was served on a wooden plank with a neat chrome beaker of fries. The burger had a very reasonable diameter and the thickness of the patty was substantial.

Getting into this I found a number of interesting things.

Firstly, it was dry. Even with the cheese, which wasn’t terribly generous, it was dry. Thankfully the beef was extremely tasty. I can only imagine that a version of this, well-done without cheese would be hard to eat.

But as it was, it was OK. The beef ruled the roost. The bacon, which had cost an extra £2, was probably the biggest disappointment. It was there. I could see it. But somehow it just didn’t translate to taste.

I think that was a new experience for me – bacon is supposed to make everything better.

The most surprising thing about this was that I could taste the tomato and I like it (yes – I KNOW!! – tomato). I don’t know why that was, but I was disinclined this time to haul it out.

There was lettuce in here too, which as usual added to the look but not the taste. Lettuce, I’m convinced, is just like fancy curtains.

The burger overall is adequate. I don’t think it’s an award-winner and it could do with being a bit juicier, a bit messier perhaps.

In this place, therefore it is probably a bit overpriced. But that is almost certainly par for the course for a place that holds the Guinness World Record for the most expensive cocktail ever served – £5,000 if my glasses didn’t deceive me.

I’m quite sure I wouldn’t have this burger again. In London, in this price bracket, there are better options available. But this is not a burger joint and for the most part people don’t come here for the burgers.

It’s a great place, a great bar. You don’t need to spend a fortune, but it isn’t cheap either. Everyone is very welcoming and it was peaceful and quiet. I can only imagine it is an horrendous display of new money at peak times though.

If you are in the capital, give it a go. It is certainly very interesting and unique. A burger accompanied by cocktails created by London’s master mixer is not something you’ll get elsewhere. And unlike me, you might even see some bunnies!