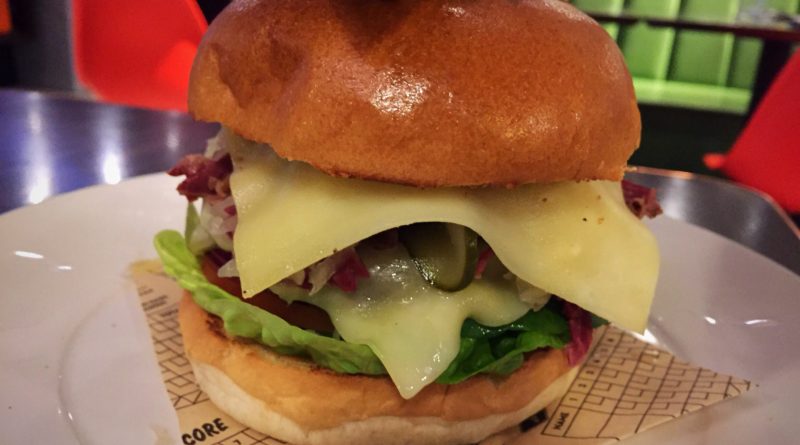 I’ve covered All Star Lanes before, having reviewed the Nacho Cheeseburger, which is a permanent menu item.

This time round I saw a picture of the current special on social media and it jumped to the top of the queue. So here we are, getting stuck into The New Yorker Burger, described on its promotional blurb as “the Reuben reinvented”.

I’ve had a Reuben-style burger before, at Mishkin’s in London.

That was quite good, but I must say this one looks even better. But looks can be deceiving – the proof of the pudding, as we know, isn’t in the looks. Let’s find out.

There’s sauerkraut and salt beef on here, which will be the key ingredients in making this Reuben-esque. There’s also gherkins, Jack cheese and deli Mayo whatever that means.

All of this sits atop their 6oz patty, as well as some brown, red and green on the picture – bacon, tomato and lettuce? I’ll find out shortly.

As I wait, I’m given some sauce – all the sauce it would seem – BBQ, ketchup, hot sauce, mustard and two types of Tabasco.

All Star Lanes is decked out nicely, with the bar, restaurant and bowling areas all clearly defined. Service is impeccable and the whole place has a timeless charm about it. The burgers are also very good – well, living next door to Almost Famous, they’d have to be.

When it arrived, I noted the precise presentation as well as the glorious smell. The brown under the patty (which is assumed to be bacon) was actually red onion, so there were a LOT of flavours and textures going on in here.

First things first though, this burger is built around a rather good patty. The other special currently running actually has a Wagyu patty and a price to match, but it also has mushrooms, and the standard patty is already rather full of flavour.

I wasn’t asked how I’d like it done though, and it came out a bit too much on the well done end of the scale. Doing it medium, or at least giving the option, would be a big plus.

Staying with theme of meat for a bit, the salt beef topping was also very good on its own. Within this burger stack, the saltiness was a little lost, probably due to the stronger sour tones of the mayo, sauerkraut and gherkins.

But that was no bad thing because these things were wonderfully interesting on this burger. The sauerkraut particularly, with its characteristic crunch, was delicious and worked really well with the red onion lying under the patty.

I really didn’t taste the lettuce or tomato at all, but the lettuce had been cut and placed perfectly with a very keen eye on the aesthetics of this. And speaking of aesthetics, where they blended well with practicality, was the bun. Looked good, tasted good, held together until the end.

And finally the cheese – two slices of Jack doing a grand job in the middle – the cheese worked particularly well with the salt beef and a sandwich of salt beef and cheese was something that definitely occupied some of my mind.

So, a summary – a terrific special from a place already on any discerning burger aficionado’s list. I believe the New Yorker is around for a couple more weeks. Get one. 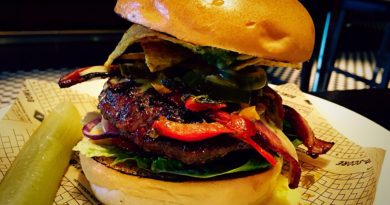