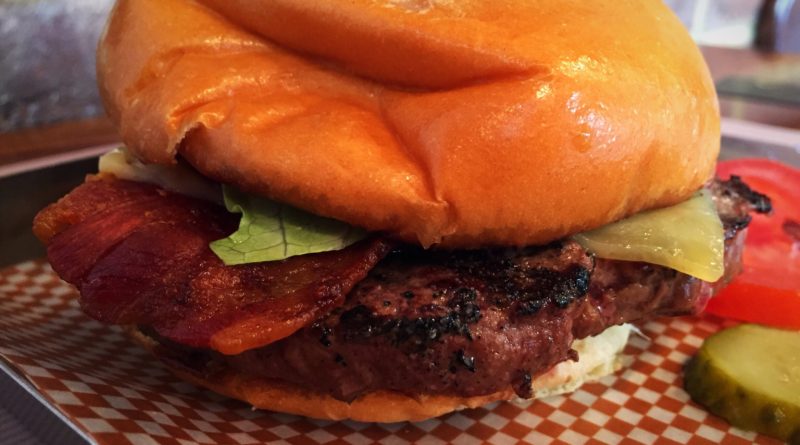 All burgers are served in toasted demi brioche buns accompanied by iceberg lettuce, beef tomato, red onion, sweet pickled gherkin. All beef burgers are 6oz, from grass-fed cattle and supplied by one of Scotland’s most highly respected butchers.

Brgr Co is Lebanese as far as I can tell from the website, but I may be wrong. In the UK, there are two locations, both in London.

The interior is generally more “restaurant” than “burger joint” with bricks and dark wood, and a menu that includes a few other things. It has a range of burgers, meat upgrades, hot dogs, desserts and drinks.

I’m not terribly keen on the vowel-free name. It sounds like Keith Harris and Orville trying to say “burger” and is probably a symptom of the social media / text speak – driven nonsense that has pointlessly morphed London into “ldn” and Manchester into “mcr”. That sort of thing is fine for Air Traffic Control, but is awfully daft in normal speak.

I made a booking via their Twitter team and on the day was running late. Being courteous, I phoned the Soho restaurant to let them know. They had no idea what I was talking about, so a blk mrk for internal communication there. As it happened, it didn’t matter as there was only one other table of customers at the time.

I decided to go for the Bacon and Cheese BRGR because it’s often the best way to experience a burger in a new place. I did decide to upgrade to the hanger steak for £2 extra. The rump steak would have been another £5.75 which I found a bit excessive.

Anyway, my burger (I’m over 12 years old so I simply refuse to write it without the vowels) arrived in the quickest time imaginable.

Seriously, I’ve had slower fast food than this. Partly due to the emptiness of the restaurant but also partly due to a low cooking time – yes I was asked and it’s nearly always a good sign in burger places. I went with the house recommendation of medium-rare.

The burger was set out on a little rectangular tray – you see them all the time on their Twitter feed. The bizarre thing though was that the other toppings (lettuce, tomato, pickle and red onion) were set out on the side, not actually on the burger itself.

Now, there’s an upside to this, and a downside. The upside of course is that you can choose which toppings to put on, and which to leave. The tomato was left of course, instead of removed. The downside was the feeling of self-service. If I wanted to make my own, I’d – you know – make my own burger. Overall I don’t think I liked this because it was weird.

The fact that I’ve devoted a paragraph to it makes it a USP I suppose. As for the tasting, I was fairly impressed without being bowled over.

The demi-brioche was well suited and held together well right to the end. Granted there wasn’t a lot of sauce to kill off the bottom bun, but it was a good choice nonetheless.

As for sauce, whilst mayo was offered (and declined) the meat juices from the med-rare cooking were sufficient enough to keep this moist. I do wonder if it would be a bit too dry for anyone who chose to have it well-done.

The streaky bacon was very crispy, crunchy even and gave a nice relief to the otherwise soft bite throughout. I noticed after I’d finished that cheese was a choice of cheddar, gruyere or Monterey Jack. I wasn’t actually asked which one I wanted but I was given cheddar and that probably would have been my choice anyway.

And that brings me to the patty itself. This was lovely. As I said, I’d asked for it to be done medium-rare and it was done exactly so. You’d be surprised, or maybe not, at the number of places that seem to err on the side of caution.

The hanger steak had been quite coarsely ground and not too tightly packed and was genuinely delicious. Proper grill marks on the outside with the right tone of pink in the middle. Having seen the expertise at cooking it, I’d probably consider trying the rump steak next time, whilst feeling reasonably confident that the non-upgrade blade steak would probably be good too.

So there you have it, Brgr Co in Soho and Chelsea, London. A solid addition to the burger market in the capital – a fairly upmarket feel without the prices to match, and most importantly a good appreciation and understanding of their beef.

One thought on “BRGR Co. Bacon and Cheese BRGR”