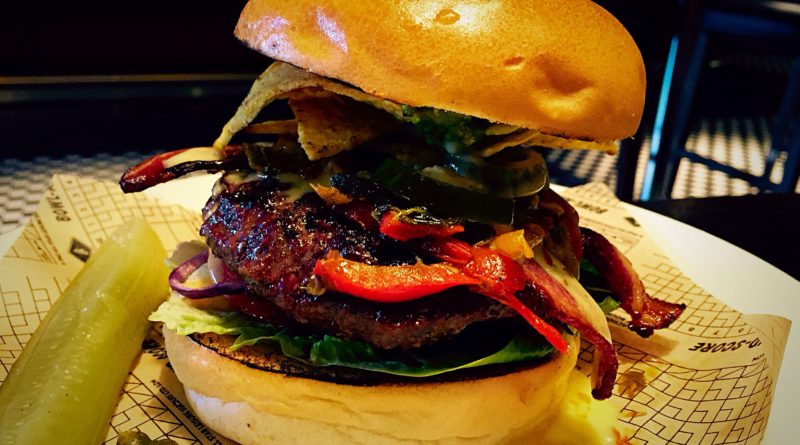 Ok, All-Star Lanes is a ten-pin bowling place in London and Manchester. Not the first place you might think of for a burger.

When the Admiral was young, centuries ago, birthday parties were at Wimpy. When Wimpy’s star faded, bowling parties were the thing. So having a burger at a bowling alley takes me back almost to the Glorious first of June.

Anyway, All Star Lanes next door to Almost Famous in Manchester’s Great Northern, has quite a burger menu and I was faced with an extremely difficult choice between two of my favourite burger novelties. Mac n Cheese or Nachos. The King Pin burger has the former while the Nacho Cheeseburger, obviously has the latter.

I opted for the nachos, with an extra £1.50 on top of the price for treacle cured bacon. Who would ever look at a menu and say “I think I will not have the bacon?”

So it’s a bacon cheeseburger with nacho crunch.

It arrived and I was in awe. The presentation was utterly outstanding. A good size too, with toppings all over the place and a whole palette of colours on display. This was going to be great.

The bun looked to be brioche. I must admit I’m getting a little tired of brioche as a burger bun, but it is very tasty if not quite as practical as other options. This one was quite strong though.

The headline feature on this burger was obviously the nachos and they didn’t disappoint. Crunchy all the way through, exactly as expected.

The crunch aside, what we are left with is a bloody amazing bacon cheeseburger and I’ll tell you why.

The bacon, which I’d added, was completely perfect. Crispy and downright tasty. Covered in treacle, which might well have something to do with it. I do like my bacon and this was amongst the best I’ve ever had.

The rest of the toppings were a smorgasbord. Peppers, jalapeños, onions, red onions, all added an arsenal of textures and flavours, the red onion and jalapeños in particular giving a most welcome bit of heat.

At this point, I was beginning to realise this burger had it all. Flavours, heat, texture, presentation. I couldn’t fault it.

So, the bun, although predictable, was terrific. The toppings were out of this world, and the nacho crunch was more than just a gimmick. This was a burger that goes straight onto any Top whatever list you care to mention.

And it doesn’t end there. You might expect a bowling alley to use some sort of generic beef and cook the living daylights out of it. Not here.

Here, at All-Star Lanes, you get a bloody tasty patty, cooked pink and right up there with all the burger greats.

On the size, it was just about perfect too. Not too overwhelming but not exactly tiny either. It went down well and I did not feel over-full.

Beauty and genius often occur in the most unlikely of places and this is a prime example.

Yes, it’s possible to find a better burger, but not by much. This was truly one of the greats. 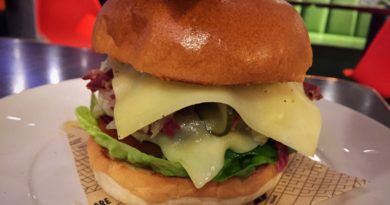