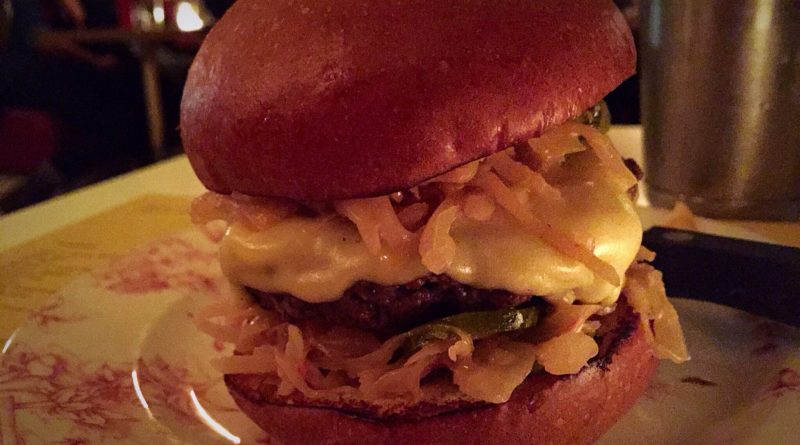 Mishkin’s is a “kind of Jewish deli with cocktails” right in the heart of theatre district in London, just off Drury Lane where the Muffin Man used to live.

Everyone has heard of the pastrami-based Rueben sandwich, and what Mishkin’s has done is turn that into a burger. Not unique, but intriguing nonetheless.

It comes in a 6oz (£9) or 12oz (£16) form and I’m going for the smaller one. Partly because I’m quite full today and partly because I think it might give the toppings a better chance to shine.

Outside, Mishkin’s is very unassuming. Lettering and lace curtains place it in about 1957, although inside it is bright and modern enough.

And indoors I discover something I didn’t know before. It is run by the Polpo empire, and Ezra Mishkin doesn’t actually exist (so in that respect it isn’t dissimilar to Frankie and Benny’s).

Whether that is the reason for the music being played too loud, I don’t know. But other than the pseudo-punk trying to destroy my eardrums, the place was great.

Diner-type decor, with some candles and good lighting (a bit dim for photos though, so I apologise in advance if they don’t look great).

There are a lot of cocktails on the menu, but I’ve had enough of that today, so I order a proper lemonade and a mint chocolate milkshake. It’s a real, sweet, refreshing change. Both of them.

I ordered my burger. Toppings are pastrami, sauerkraut, Swiss cheese and Russian dressing (whatever that means). Anyway, Swiss cheese aside, this is a selection of toppings I’ve never had before, so my interest is definitely piqued.

As I waited, I really enjoyed my milkshake, even though it cost a rather extreme £5, high for its small size. But it is very nice.

It is quite a short wait for my burger. When the waitress put it down, I got the smell first. Pastrami mostly. It is a neat little stack, with more work on the height than the diameter and it looks good.

The bun looks fine, the cheese seems liberally applied and the pastrami and sauerkraut seem generously draped over everything. I took a bite and got the sour sauerkraut right away. Never had that sort of flavour on a burger before.

I think the Russian dressing included pickles (perhaps subtly shoving them unnoticed across the border) but it wasn’t listed in the menu.

For some reason, although I could see it clearly, I wasn’t getting the pastrami taste at all. I really don’t know why. Perhaps it was the strong sourness of the dressing and sauerkraut.

The whole feel of this was definitely a Reuben. More beef that you might find in the sandwich version, but a Reuben nevertheless.

The beef requires some note. It’s good but it’s not great. It’s cooked a little bit too much – something I’m finding alarming often in these reviews.

I don’t necessarily want my burgers to be as rare as Bleecker Burger, but a bit of pink is good. No pink here as far as I could see, and as a result seems to have lost some flavour, a gap amply filled by the toppings of course, but that combined with the weakness of the pastrami made this more of a toppings burger than a meat burger.

And that is the wrong way round. It’s a shame because I had such great expectations for this burger but left having enjoyed the milkshake more.

It’s a nice enough place with long opening hours (presumably to accommodate theatre timings) and well worth dropping in if you are watching a performance nearby.