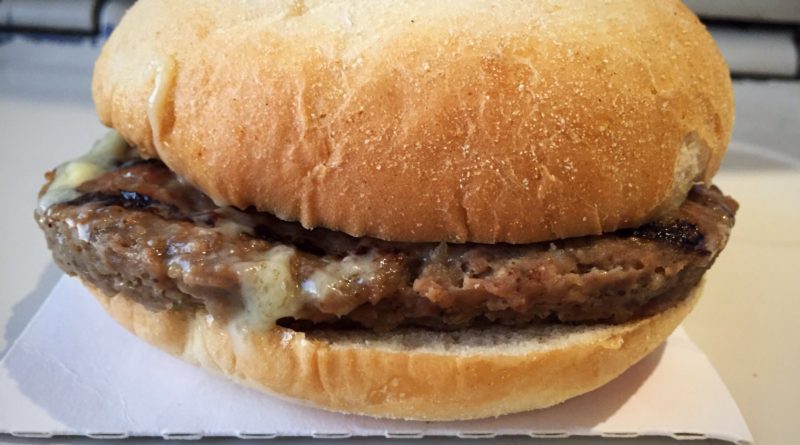 To start things off, having read the title, you’d probably expect me to say this was awful but I must admit that I can’t say that. Not entirely. However, I don’t think Shake Shack and McDonald’s need worry too much about the competition.

It’s a burger on a train – sounds rather like it should be a Samuel L Jackson sequel.

You buy it from a fridge – it’s then stuck in a microwave for a minute before being served in a brown paper bag for you to carry back to your seat. Let’s be blunt. Food served this way isn’t going to win a Michelin star. It’s also as basic as a cheeseburger gets. Bun, patty, cheese.

So, peeling off the plastic wrap and cardboard sleeve, I got stuck into my Diner Cheeseburger.

The smell hit me first – couldn’t quite place it but was definitely in that bracket of salty processed food – and probably had a lot to do with the lengthy list of ingredients.

Now, I’m no microwave technician but my experience is that bread doesn’t usually belong in there. It gets hard patches that ruin it. This bun didn’t suffer that fate and I can only put that down to the fact that it was encased in cardboard and plastic – perhaps they help to disperse the magic rays more evenly or something like that.

This review is going to be short I’m afraid, because there simply isn’t much to talk about.

The next element was the patty. Quite thick and generous, its texture was very dense and rather unappealing – more grey than brown or pink – obviously not freshly made and I suppose designed to respond best to microwave heating.

This patty also had the fake grill lines across it – presumably to add to the aesthetic appeal, such as it was. But not a stretch to imagine it had never been anywhere near a grill.

The taste, heavy on the salt, just wasn’t beefy enough. Don’t get me wrong – it did have a taste that wasn’t entirely unpleasant but it isn’t one to write home about.

And that leaves us with the cheese. Pretty generous again, but indistinguishable. The packaging said cheddar so I’ll believe it.

It was melted well though, clinging to the patty and the crown (that’s the top bun – see I DO learn stuff from Burger Lad®, contrary to popular belief).

The cheese kept the texture moist, and one thing this burger couldn’t be accused of is being too dry. It did the job.

I’m going to end the review here – it’s the only burger available on Virgin Trains and under the circumstances in which it has to be served, it is serviceable, just.

It is exactly as good as a pre-packed burger served from a microwave on a train can possibly be.