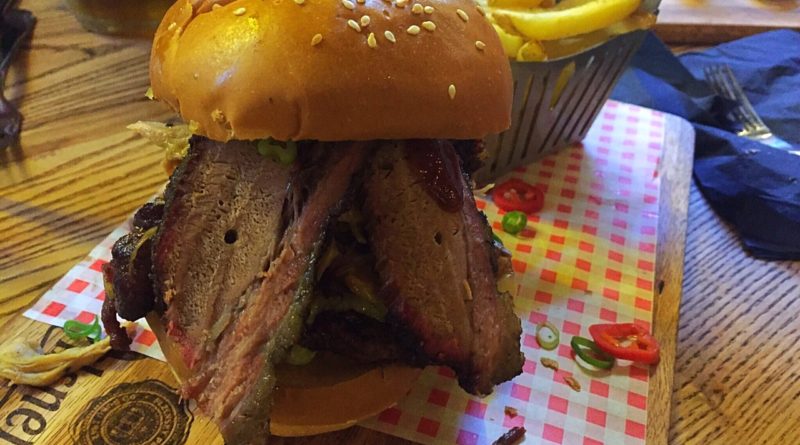 All burgers are 6oz chuck steak, all cooked on our unique Argentinian grill over live fire using only wood & charcoal embers for that true BBQ flavour. Served on seeded brioche bun & rustic skin on fries.

When you receive an invitation from Manchester’s premier Pitmaster to come and be fed at his brand new smokehouse (which is actually called “Smokehouse”) you drop everything and come running. And when you’re told there’s fresh tank pilsner on the go, you do a full Usain Bolt.

So, armed with trusty eating friends and a Herculean appetite, I headed off to Smokehouse’s invitation soft launch with the biggest of grins on my face.

Little introduction is going to be necessary for this place as host Alison ensures it is all over Twitter, but it is a big budget 300-cover proper fire-powered smokehouse from highly experienced restaurateur John Rennie.

And its crowning glory is bagging Jason Latham as Pitmaster. Jason, ex-Solita, Infamous and his own Love From The Streets street food brand, has competed in some of the major BBQ competitions and is a leading light in all things smoked.

And speaking of street food, the Pitmaster’s own jerk chicken burger (which I’ve reviewed and loved) has been brought onto the extensive menu here.

The format for the evening is sit down and eat whatever Jason sends out, along with the Pilsner Urquell tank beer that Smokehouse has managed to contract (the fourth venue in the city to offer the delights of fresh tank beer and the first with this brand).

It’s going to be busy – Jason assured me I’d get a burger as well as everything else so I could write this review, but you know what – I’d made up my mind to review anyway, even if I didn’t get a burger – because this is so unique and wonderful I couldn’t bear to hide it from you.

As it happened, I did get a burger, and Jason ensured it was the biggest one on the menu – this is not a place from which you go home hungry.

Before and after the burger, our table was constantly being topped up. Jerk squid, BBQ chicken, Texas toast with brisket, skin-on chips, seabass, sausages, and the ribs. Oh, the ribs. Apart from the fish, I enjoyed absolutely everything here, but I think the ribs won the gold medal. Falling off the bone almost straight onto my tongue, they were a delight.

The venue itself is spotless, well-lit and spaciously laid out, with the four tanks of pilsner taking pride of place. We were so well looked after by Megan and the FOH staff that we ended up staying over four hours eating and drinking away. By the time I left, all the shops selling larger-sized trousers were closed.

It was a real pleasure being joined at our table by both owner John and Pitmaster Jason, and hearing all about the concept of the venue and indeed the menu. Listening to Jason talk about his food and methods is mesmerising – this place was practically built for this man, so much so that I think it would be a lot less successful without him.

And that menu – there is a huge range of food here, almost everything that can be barbecued is there, and there is even a pizza oven to boot. Perhaps over time we will see this huge list of items being trimmed down, but at the moment what you are getting is a huge selection of Deep South smoky flavours and smells with British finesse. It’s going to be very popular.

So, with all that in mind, how does the burger stack up? Well, the Pitmaster explained that he had developed a new chuck steak blend for the burgers, and although they have to be cooked through these days, they are very juicy.

That said, when the burger arrived at the table, I couldn’t even see the beef patties. The burger was literally a wall of meat, dominated mainly by the thick-sliced brisket hanging tantalisingly out the top, as well as the more-than-generous serving of pulled pork.

Now bear in mind this is the biggest burger (at the moment) on the menu and at nearly £16, you’d expect something rather large.

Well, that’s what you get – something rather large. If I’m honest, not the largest burger I’ve ever had, but hardly a shrinking violet, and in keeping with a place like this it was very heavy on the meat. So far, so good.

I had to tackle this one with cutlery mainly because sharing was the name of the game here, and if I’d picked it up and shoved the whole thing in my face, I’d lose friends rapidly. That said, I got the impression that the bun would have held it in, but I’m actually not sure my jaw would stretch enough.

Before letting the taste buds get stuck in, my sight and smell were having a blast. The smells coming from the meat were courtesy of that amazing Smokehouse grill and the wood and charcoal cooking. I could also tell it was going to be sticky – Jason’s house BBQ sauce was all over the place and the sweet, smoky meaty sensation was so much that I have to stop writing this senten…….

The beef, as per the rules, was cooked through. But only just. By carefully selecting the blend of beef (and there’s definitely chuck in there) and cooking just the right length, the Pitmaster has ensured that it is indeed on the juicy side of cooked through.

Inspecting the contents, there were the obligatory salad items, lettuce and tomato, and I dare say that will please some people but frankly I ain’t coming to no smokehouse for a salad. There was also a slight hint of heat which I couldn’t exactly place, until I re-read the description later (food menus were not on the table) and there was sweet chilli in there.

I know I should know that but there was SO much meat, picking out other ingredients wasn’t actually all that easy.

As you know I am nothing if not honest, and I must say that the huge amount of tank beer on the go affected my ability to make notes properly, so apologies if it shows. What I do know, as an absolute definite, is that I will be back as soon as humanly possible. There are plenty other burgers on the menu, all built around that newly developed patty, so this is not the last you will be reading about Smokehouse on this website.

You need to visit. Not just for the burgers, but for the ribs especially, and all the other meats on offer. And speaking of offers, if you get yourself down there this month (August 2016, I believe there’s a rather special 50% off).

Pitmaster Jason has found his natural home and it is a match made in heaven. This place is going to be talked about for years to come. 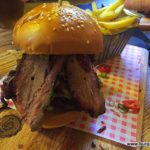 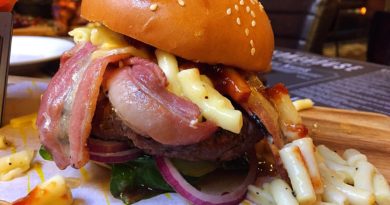