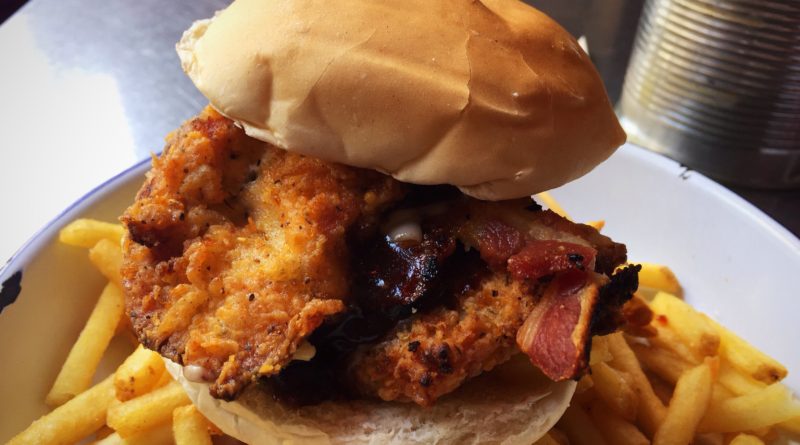 We were invited to Joe’s Southern Kitchen to try out the February special – The Double Cruncher, which has apparently beaten hundreds of entries to reach the finals of the National Burger Awards (in London on 24th February).

Now, while I’ve heard of Joe’s and had them on my list for a while, I must admit that I don’t know who or what the National Burger Awards are.

Despite that, and the fact that Joe’s manager ended up taking care of the bill, I won’t be approaching this any differently to any other review.

Anyway, Steven, the manager (great chap by the way, ex-military, seek him out and say hello when you go) explained briefly that Joe’s is part of a small group of brands called Maxwell’s (which possibly explains the prime Covent Garden spot) and a little bit about Joe’s.

I’d been sent the blurb on the competition burger beforehand and the build did look rather nice. It’s basically a fried chicken burger with cheese (and I must say cheese on fried chicken is a sad rarity).

The chicken has a crunchy nut-based coating and is breast, rather than thigh. The cheese is Monterrey Jack and the stack is complemented by some classic toppings – crispy bacon, slaw and BBQ sauce so I’m expecting quite a range of textures and flavours.

I’ve also been having LOADS of beef lately, so it’s personally quite a pleasant change to be tucking into chicken.

All of this is contained within a plain brioche bun. Oh, and there seems to be double helpings of chicken, which along with chicken salt fries being included, makes this a pretty generous offering for the price.

So I stepped into the place at the agreed time and there were some tables already on the go. Quite a cavernous space (but still not big enough for Fridays) on two levels with a large bar area and an annoying flashing Coca Cola sign taking up most of one wall.

I was greeted by the aforementioned GM and was shown around. The place inside is rather slick with a clear stab at creating a southern US feel, from the decor, the lumberjack shirts and of course the menu. There is also a not-very-secret cocktail bar downstairs that I can imagine is heaving at weekends.

It’s the menu of course that matters the most to me, so let’s have a look at the Double Cruncher. While I waited, staff that weren’t waiting tables, were cleaning – considerable attention was given to the sign outside – and it pays off, the place is spotless.

Service took about 20 minutes then my burger arrived in a rickety camping-type bowl, presumably to emphasis the “good ole boys” feel.

I started eating it before realising there was a problem. The bacon was black and the slaw was missing. So I highlighted it and it was replaced with apologies and no fuss. Second time round the bacon was done right, and there was plenty slaw.

Now, the key ingredient here is obviously the chicken. You can’t be a proper “southern kitchen” unless you nail the fried chicken, so I cut off some to try before tucking into the whole thing.

My piece picked up a good bit of cheese and sauce as well and I’m pleased to say that it was good. A real good crunch to it with nice tender meat inside. I’d happily have this as part of a chicken dinner.

Biting in I did get a good, lovely selection of textures and flavours with a decent but not overpowering sweetness and a surprising heat.

Alongside the crunch, the softer items – chicken meat, cheese and sauce – were very much in play. Some BBQ sauces can be far too overpowering but not this one. It gave very tasty sweet tones to the burger, which alongside the unexpected spice, elevated the whole thing beyond a plain fried chicken affair.

The slaw, properly and generously included in my replacement, was delicious too. I know it isn’t everyone’s cup of tea as a burger topping, but I’ve come to like it, especially with chicken.

And the cheese worked with the sauce to lubricate this otherwise dry build, a good combination, and it did so without compromising the crunch.

I liked the chicken and the array of toppings – it possibly could have done without the bacon, but its inclusion was a subtle boost to both the eponymous crunch and the savoury flavours of this burger.

I don’t know what burgers this beat in the competition or what it faces in the final but it’s a strong contender. For most customers I suspect the competition aspect is arbitrary, and what you have is a well-developed, well-built tasty chicken burger at a keen price.