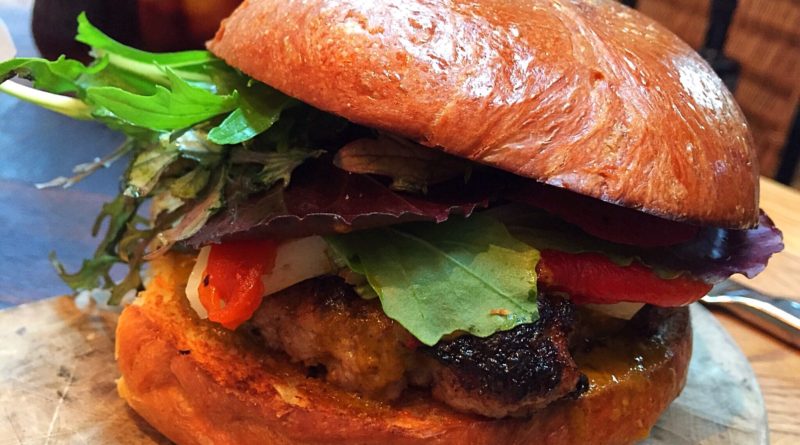 Iberica is a proper restaurant, and by that I mean it’s not a burger joint. Not that burger joints aren’t “proper” but you know what I mean. It’s not even a place that has a burger on the menu usually. It’s a proper Spanish restaurant and walking in the door I can see immediately why it’s been put in Spinningfields.

I say there’s not usually a burger on the menu but what there is, is a little slider dish with a small patty made of something called “secreto pork”. What they’ve done is grown that little slider and turned it into a burger. A rather special burger for national burger day. Now, I really hate to do this to you but by the time you are reading this, it will be gone. One day only, you see.

But maybe if we can share this enough and it sells well they might consider bringing it back. I’ll tell you now that I liked this a lot. If ever there was a reason for a burger review to go viral, this is it.

So, what do we have then, in this secreto pork big brother to the sliders? A pork burger in a relatively simple build with cheese, manchego of course with red peppers and chimichurri. All very Iberian!!

It is a plush unit in Spinningfields, quiet at lunchtime but the quality of the offering probably means evenings are very busy. Food friends who know what they’re talking about all speak highly of the (non-burger) food here. However, from start to finish, there was something just a little off with the experience, something I couldn’t place at the time, and it only occurred to me as I was walking away. I got the impression, perhaps unfairly, that the customer with one burger, a Diet Coke and a NBD discount voucher wasn’t what they really wanted.

So, while the overall impression does count, the key here, as everywhere, is the food, and it was very good. I didn’t have to wait very long for it, and sure enough out it came with an immaculate presentation.

I will come to the burger in a moment, but it and the chips (in a little tin) arrived on a piece of wood. It’s all a bit “we want plates” but my eyes were drawn to the burger and that was impressive.

It had a strong vinegar smell – from the chimichurri verde – and that was oozing out onto the bun heel just ever so slightly with an inviting stickiness. It also comes with chips, which were the weak link here. I found them a little salty and although they were properly crispy on the outside, they had a strange spongy texture. I didn’t finish them, but it didn’t really matter and their memory was soon left in the shadow of this special burger.

There is definitely an eye for colours here. All the primary colours (except blue, obviously) are present inside, and the bun is a lot darker than normal. Not burnt dark, but special dark. A lot more so than most burger buns. And it was very robust too – the crown did all the beckoning in while the heel knuckled down and held everything up. A great choice.

And the Spanish flair for colour continued inside. Green rocket, red leaves, yellow and red peppers and the dark green of the chimichurri.

And while the eyes are occupied with the colour sensations, the tongue has a whole bunch of flamenco dancing to do with the flavours in here.

The overall taste was very fitting to the type of restaurant. The balance of flavours was gentle and I soon realised that beef (which I’d ordinarily prefer) might actually overwhelm this build and I suspect this came out early in development of this. Speaking of which, it seems pretty clear that this has been extensively developed rather than just thrown together. This is what happens when burger development is fine tuned.

The pork patty was very soft and pillowy. This was super fresh meat absent of all processing here. So much so that it was almost verging on pâté. I’m sorry – I can’t resist the wordplay – we almost have a pâté patty here.

It’s still a cheeseburger though, and performing cheese duties was the manchego. It was thick and unmelted – usually a combination you find in poor pub burgers that ought to have melty gooey cheese of the sort ubiquitous amongst top trendy burger joints. But here, it was clearly deliberate. Although not a strong cheese, it was very well suited and I did think (for possibly the first time ever) that having unmelted cheese was better than having melted cheese.

The red peppers softly roasted rounded this off to leave a very distinct and pleasing set of flavours in my mouth. It’s probably not the first Spanish-themed burger I’ve ever had but it was one that had been very carefully planned out and executed and that care definitely shone through.

Most of my initial reservations at the beginning were washed away, although there was a bit of faffing with the National Burger Day discount. The offer was for 20% off this burger, but the server told me it was just for the sliders. So I had to question that and it was fixed, granted but I don’t like these awkward moments – the sharing of information between Mr Hyde, Iberica’s management and the FOH staff could’ve been slicker.

In summary, this was a thoroughly enjoyable, very savoury stack with a pretty unique set of flavours that fit well with this venue.

Obviously I won’t be back here for a burger unless we can collectively put Iberica under social media pressure to keep this on the menu (well, it worked for Wispa Gold), but I would quite like to come back and try the meats – perhaps I’ll try and dress better next time. 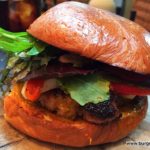