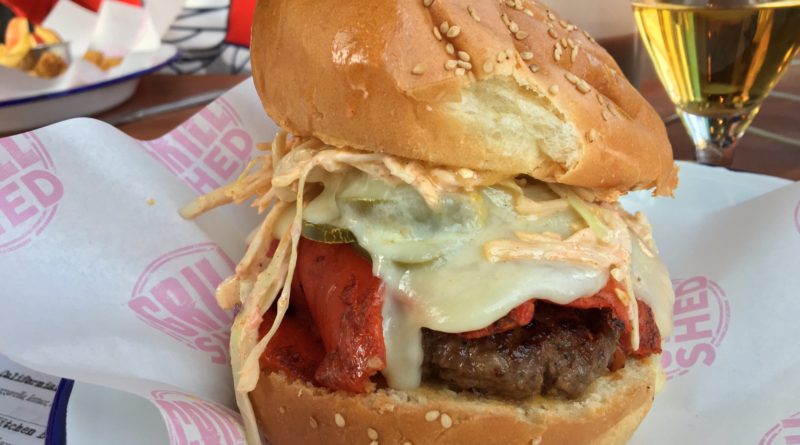 Today we finally got the opportunity to visit The Grill Shed Gloucester and I’m pleased to report back that it was worth the special trip from nearby Cheltenham.

The Grill Shed opened in late October 2016 and occupies a premium location in the sprawl of urban re-development on Gloucester Docks – a brief five minute walk from both the city centre and the shopping destination, Gloucester Quays.

It really is very smart around here and residing in Cheltenham I would say that this could easily be the number one destination in Gloucestershire for restaurants now. Gloucester is really undergoing a culinary revitalisation and The Grill Shed are going to be one of the pioneers of that revolution.

Inside the “Californian eatery” it’s bright (an Instagrammer’s dream), immaculately contemporary and houses the obligatory exposed ventilation systems. The paper menus looked a bit tatty although I believe these are temporary…

Sitting inside, I noted just how much I liked the décor with an eclectic mix of wooden “school chair style” seating and tables – one table close to us looks like it has been made from scaffolding tubes.

Very slick, very cool and an obvious amount of money has been ploughed into the place. And from what I have researched, The Grill Shed is owned by a consortium, with four of the investors being local Gloucester Rugby players.

What frustrates me when I email a restaurant asking if we can come in and do a review is not getting a response. It was only the second time I emailed when I actually mentioned a booking that I received a reply.

It would have been nice to get the real story behind The Grill Shed Gloucester and some insight/supplier info from one of the owners instead of me gleaming bits from local press and a passing comment or two with proprietor – former Team GB volleyball player Jody Gooding. He said I should have gone with the signature Bison Kitchen Burger instead of my choice today… maybe next time…

The menu is concise and uncomplicated which is good and they use quality, locally sourced ingredients. You’ve got the smoked meat plates, wholesome “super food” bowls, and a selection of sides, tacos, burritos and burgers. Obviously I was here for the burgers, and today it had to be the Inferno (available in beef, chicken or veggie options).

One of the main reasons for my choice was the inclusion of Tubby Tom’s “Nuff Love” sauce. I ran into the owner of Tubby Tom’s about a year ago now at a Stroud Farmers Market and have since kept an eye on the growing brand.

Despite arriving an hour before my 2:30pm booking, the staff were more than accommodating to seat us at our table and after a fairly considerable wait the Inferno was presented before me.

Visually it looks pretty bloody awesome! The Chipotle Slaw looks inviting, the aesthetics of the roasted red peppers and the slight glimpse of jalapeños in the melted, subtle Mozzarella hint on what is to come. It smells fantastic too… a slightly spicy aroma from the beef patty dusted in the inferno rub.

Biting in you get a very credible heat which is primarily from the rub and this is backed-up by the jalapeños and slaw. It’s nowhere as spicy as the evil Ghost Chilli Burger from Cheltenham-based Real Burger, but then it’s more enjoyable as the Inferno is not so crazy.

The patty itself is commendable with a quite tightly packed meaty texture. Juicy, fresh and with a favourable flavour from the rub – I was pleased with it.

I’ve never been one for coleslaw… or slaw, but this is a good one! There’s no real distinction between where the “Nuff Love” starts and the slightly creamy Chipotle Slaw ends. But with a crunchy freshness and vibrant mixture of flavours this makes for a very decent burger topping. Impressive.

I sampled some of the “Nuff Love” sauce by pinching one or two of my kids’ chips… and that sauce is truly buff… big love from me on that concoction! Slightly sweet from the pineapple with a beautiful chilli fusion blend – seek it out!

Speaking of kids – they had two mini sheds meals priced very reasonably at £4.50 each including a drink and they loved them. And looking around inside while the mixture of 80s tunes plays amongst the background chatter, this is very much a family friendly establishment. We did encounter a bit of a wait for our desserts though, but again the staff were incredible and gave us them to go afterwards.

Back to the Inferno…

It is completed by the aforementioned roasted red peppers which would never be my first choice for a burger topping, but they work really well with the other ingredients. The Inferno is a slightly spicy, slightly sweet, sometimes creamy, clever ensemble of flavours – I was pleased with my choice.

The jalapeños offer a distinctive pickled bite now and then, and as I sat there taking in the ambience I imagined how magical it would be here on the Gloucester Docks in the evening with all the lights on. Very picturesque. And I was enjoying it so much I stayed longer than I normally would when doing a review. Credit to the atmosphere of the place.

And it’s popular… I found it getting busier after 2pm which really made me hope that as a nation, we’re moving away from the institution/fixation of the traditional “lunch is served 12 to 2pm” mentality that has blighted Blighty for years.

The bun of the Inferno (and I assume the other burgers on the menu) is big… and it needs to be! This was a mighty impressive stack, packed full of ingredients. To my disbelief, it actually coped more than admirably the whole time with no bun disintegration.

Overall, the Inferno from the Grill Shed Gloucester is a lovely blend of flavours and textures and the love and care of the locally sourced ingredients shines on the Cub Camp style plate.

My only minor gripes revolved around the Mozzarella pretty much falling out “the back” of the burger as I ate it – possibly a sign of just how much was included on the build. Perhaps a little less and more precision when placing? Again a minor fault.

The only other issue I had, seemed to be the bread to beef ratio – at the end, my last six or seven bites were just bread, slaw and cheese as the patty’s circumference didn’t seem to fill all of the bun.

I don’t want to end here however as The Grill Shed is a fantastic eatery in a superb location.

My Inferno burger was presented attractively, it smelt good and it tasted very respectable indeed. I wouldn’t place it in such lofty heights as say Manchester’s Solita or Almost Famous, or London’s Haché. But for a restaurant in its early days it’s certainly going to be esteemed as one of THE destinations to visit in Gloucester.

If you’re in town for the impending Victorian Christmas Market or shopping in the centre or at The Quays. Or just fancying a day out to a city which continues to improve, then I would recommend checking out The Grill Shed. Bonus if you wear a Cherry and Whites shirt… 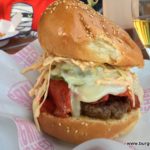