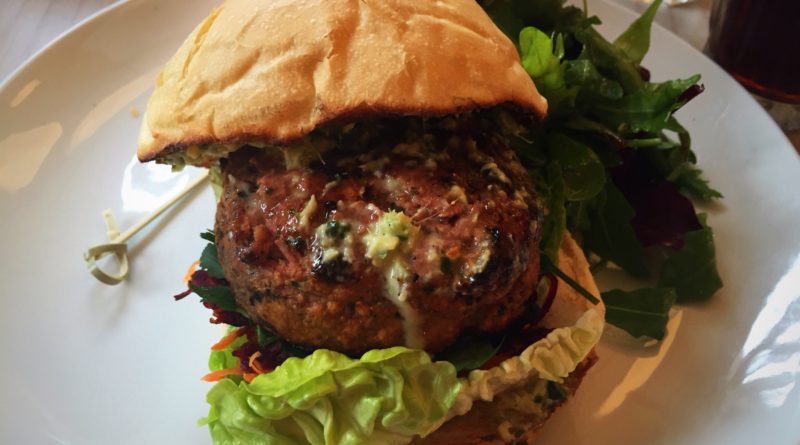 I wasn’t going to return to Evelyn’s so soon after enjoying the unique crab and shrimp burger. It’s expensive, and they don’t seem to reply to emails.

However, it was the first choice of friends with whom I was eating, and we also discovered the menu is half price in January.

Plus of course, even if the emailing and social media is patchy, I really enjoyed everything about the last visit. So, the first 2016 review is the same venue as the last 2015 review.

And it’s another fairly unique, interesting burger with an eclectic fusion of influences. And I also knew I was going to be treated to a very accomplished use of chilli (i.e. Not stupid hot, but just the right amount to complement the other flavours).

And of those other flavours, lemongrass can be tender, and I’d imagine easily wiped out by an aggressive use of chilli. Mr Moses and his team, however, KNOW their chilli.

Unlike the crab and shrimp burger which comes with “chips”, this one comes with “shoestring fries” and that was the first thing I noticed when it arrived – chips.

Chips are the fat ones, fries, especially shoestring ones, are the thin ones. I’d been given the wrong kind. It didn’t warrant mentioning however, as I rarely eat much of the potato accompaniment anyway and was probably just a one-off mistake.

The similarities continued with the bun – same tall-ish stack with a slimmer diameter, and the inside of the bun toasted, perhaps a little too much, giving it a noticeable crunch.

The patty stood out well before I put it anywhere near my mouth. It was very thick and had clearly been seasoned well. It did look extremely appetising, and you can’t tell from the pictures obviously, but it also smelled fantastic.

By this point I was very eager to tuck in, which I duly did, and was greeted by an onslaught of flavours and textures.

Now, I must point out that this was another burger at Evelyn’s without cheese (I don’t think there’s cheese even on the beef burger) but again, the moisturising action of cheese was adequately handled by the chilli ginger Mayo.

Perhaps not as much as it could have been, but it wasn’t dry. And not only that, but the chilli and ginger, along with the lemongrass gave this burger an extremely exotic appeal – another very unique creation.

The dry bedding area was taken care of by lettuce, grated carrot and beet, the latter of which is on my list of magnificent but underused burger toppings.

Lettuce, even at Evelyn’s looks nice, but does virtually nothing to the taste, so I could take it or leave it.

The carrot and beet, on the other hand, gave a fantastically creaminess to the lower edge of the patty, while the mayo kept things afloat up top.

As for the patty itself, definitely turkey. Consistency-wise more tightly-packed than I’d like in a beef patty, but seemed to work with the bird.

To the eye, there was clearly more than just lemongrass in here, but the lemongrass came through. I’m not sure I’ve had it on a burger before, but certainly in Thai cooking (where it is a lovely ingredient often drowned in fish sauce).

So, what we have here is a different meat to one usually found in burgers, no cheese, two types of vegetable also rarely used, and an incredibly moreish mayo mix to spice it all up.

All in all, delicious I must say, and probably a bit more burger-ish than the crab one.

I did enjoy it, and the price reduction certainly helped.

It’s a great medium-sized venue that feels so comfortable and welcoming, and with innovation practically oozing out of the kitchen, I imagine there’s considerably more to come from Evelyn’s. 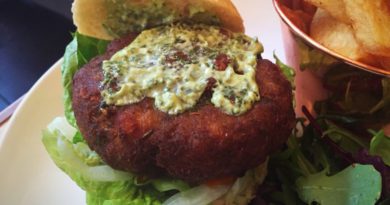