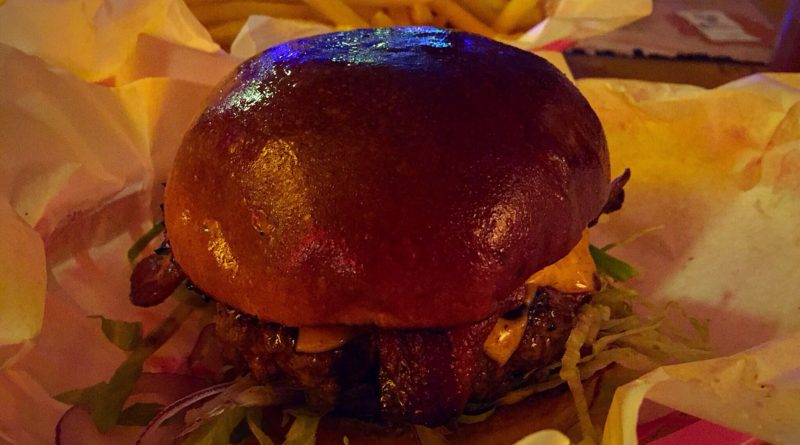 Burger Bear is yet another of these heavily mentioned and highly rated burger places in London.

They’ve got two places at the moment, a pub residency in Peckham and a joint venture in Stoke Newington (Stokey Bears). There’s also a Bear HQ in Shoreditch in the pipeline.

Reading about them, it becomes obvious that they’re most famous for the Grizzly which seems to have won a number of these ‘trendy’ burger competitions that occur, mostly in the capital.

I opted for the Stokey place and it’s not especially easy to get to. Not central, not on the tube. It requires a bit of effort. Many of the best things in life require a bit of effort.

Right, this place is hipster heaven. Ordinarily that might put me off. Some seats are cushioned beer kegs, tables are old school desks complete with graffiti.

It’s trying to be cool and the Burger Bear himself, Tom Reaney, is a young man with short hair and a big beard.

All of that shouldn’t detract from the great burger awaiting. And it’s a great burger. The Internet says so.

Stepping inside the almost non-existent exterior after a walk through deepest Hackney on a cold dark night, I was immediately struck by the warm, vibrant feel (countered in part by some cool UV-type lighting).

Shown to my seat, I was given the menu that I’ve seen and studied umpteen times. I don’t really need to look at it as I’ve already decided. The Grizzly.

I ordered an Austrian Pilsner of some sort from Bear Hug Brewing (the other half of the JV I assume) menu.

There are a lot of beards and lumberjack shirts and tight jeans here. Hipster. But there’s also a vast age range and even a couple of families with young children.

I like this place (thank god, given the time it takes to get here). Roll on Burger Bear HQ.

Tom isn’t here himself today but the manager chap is very helpful and friendly. They all are, actually.

As I wait, I noticed the kitchen is semi-open. I can’t actually see stuff being cooked but I can certainly smell and hear it.

Bacon jam is the stand-out feature (and possibly one of the factors in these award wins) on what is otherwise essentially a bacon cheeseburger.

Bacon AND bacon jam. And what have we learned about bacon (see below). It just shows that great burgers don’t necessarily require loads of toppings.

So is it as great as the hype? Bear with me and we’ll find out (see what I did there?).

When it arrived, two things struck me. Firstly, that is a massive amount of fries. Secondly that’s probably the shiniest burger bun I’ve ever seen!

Opening it up, I just wondered if perhaps the interior of the bun was over-toasted. There was certainly quite a bit of black.

The meat though, was done perfectly. Grilled on the outside, pink on the inside. Medium.

The Grizzly’s core is bacon. My kind of bear! Bacon makes everything better and that is true here perhaps more so than anywhere else.

Two marvellous rashers draped across the top, settling in with the cheese to provide just the perfect accompaniment to the meat.

And the bacon jam, sweet and savoury, was pinging around with every mouthful, making me want the next bite before the current one was finished. Great stuff.

The meat was generous too. No slim patty here. This was meat with a capital M.

I’ll be having more of it if at all possible. The Angry Bear is a spicy (but not stupidly so according to the manager) so that’ll be my next Bear.

If you haven’t had a Burger Bear then you simply must. My thoughts would be, unless you live nearby one of the existing places, wait a bit until Bear HQ opens on Old Street. It’ll be much easier to get to.

Before I sign off, a word on the fries. Yes it was a massive basket, and yes I never had a hope in hell of finishing them, but they were just what good burger fries ought to be. Thin, crispy, salty.

I get the impression that the menu development here has been purely focussed on flavours and textures. Hence the shiny bun, the bacon utopia, and the beer, brewed by Bear Hug, was something quite special too.

A conversation on the platform at Rectory Road sums this burger up. I haven’t bothered including the first half of the conversation because it surrounds the young lady’s attempts to procure cigarettes and/or roll-ups (whatever they are), neither of which I had. Anyway, it then went like this

“Where are you going?”

“So what are you doing here?”

“You came all the way here for a burger?”

Well, yes. I came all the way here for a burger. This burger!

The Burger Lad® team salutes all at the Burger Bear team.