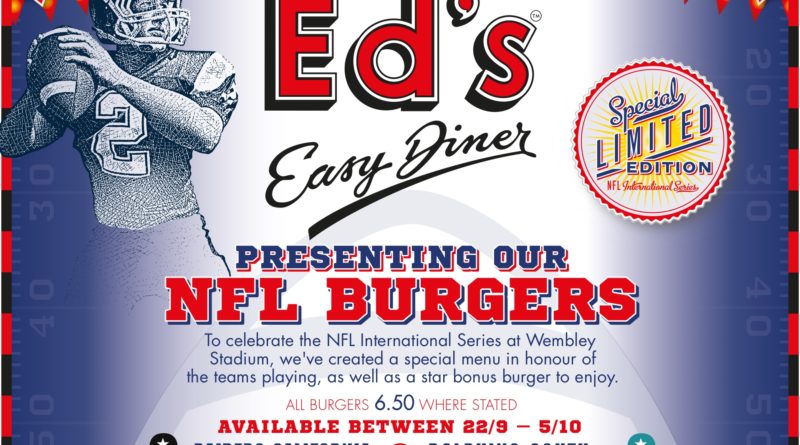 Exclusively produced for Ed’s, from fully traceable prime British farms, always fresh, never frozen, grilled medium to order, and served on our own toasted sesame seed bun – the way we’ve been doing it since 1987.

Burger Lad® has always threatened to go to Ed’s Easy Diner since it was opened at Gloucester Quays in 2013. But with a vast array of burgers in the NBL (National Burger League) it has somewhat evaded us. Until now…

I didn’t realise that Ed’s was established in Soho, London way back in 1987 and has since grown to nearly 40 UK-wide restaurants… or diners!

Each, by all accounts are styled like diners from the 1950’s with shiny chrome fittings, red and white signature colour scheme and dazzling neon signage.

Luckily no Biff Tannen types were hanging around Gloucester Quays tonight as we walked in to the diner to realise my density… I mean destiny. Also should I ask for a tab or would I end up with a cup of tea and sugar…!?

To celebrate the NFL International Series at Wembley Stadium, Ed’s Easy Diner have created a special menu in honour of the teams playing, as well as a star bonus burger to enjoy.

The bonus burger sounds a bit of a calorific quarterback at £15.95 and is intended to be shared between two.

Tempting as it sounds I really was here to try the first round of this NFL inspired burger series which is available from 22nd September until 04th October.

What I like about this promotion is the week long gap before round two starts so you don’t feel like you have to rush back to sample the next ones.

That depends on whether the Raiders and/or Dolphins can score a touchdown or if they serve up a field goal miss.

We arrived at Ed’s promptly for our table at 7pm on Friday evening.

We’d been contacted by their marketing team inviting us to try these NFL burgers and were assured no voucher would be required.

They said that the manager would know we would be coming but when we arrived we were told that no bookings are taken and that none of the staff on duty were expecting us.

After showing the very helpful waiter the email exchange he went to a guy in the open kitchen and came back to tell us everything was fine.

OK I started to relax a bit… except for the fact I was sat with my back to the serving station and had a clattering in my back every 2 minutes.

No worries though, after all I am sat in a busy, bustling authentic style American diner.

Inside it’s a cute, gimmicky restaurant which seems popular with children as there was a fair few when we arrived.

What I did notice in my time here was that it remained busy throughout so they must be doing something good.

It’s very bright (good for pictures!), not too loud and clean, new and shiny everywhere. The kitchen is open so you can see the staff cooking and the smells coming from it were pleasant enough.

I felt like I was sat in an American diner and half expected Guy Fieri to walk in at any minute.

We weren’t going to order fries as Miss Milkshake has been before and assured me I wouldn’t be impressed as they are labelled as “Chunky Fries” – aka chips.

And that’s what they are in essence. Chips.

In my mind, you can’t call yourself an American diner not serving up proper fries – it’s like having a hot dog place selling only Richmond’s. But we’re here for those NFL burgers so let’s put this behind us and move on.

The kitchen has got NO PEPPERS for the Dolphin as the delivery is arriving tomorrow.

We decided to have it as it comes unfortunately without the peppers… a key component of the burger.

Please… if you’re gonna invite a burger reviewer to your restaurant to try your limited edition burgers make sure you have all the ingredients.

Still I sat there with an open mind… after all I wasn’t trying to be Ramsey Michel tonight in Gloucester. More on Ramsey to follow…

As I glanced over at the kitchen I saw a familiar friend – a catering sized bottle/jar of Levi Roots Reggae Reggae sauce… so the jerk sauce on the Dolphins burger was not homemade.

Never mind I am a massive fan of this sauce, just ask my sausage and mushroom breakfast baguette… and after a 20-ish minute wait we were presented with our food.

Up first the Raiders burger…

It looked alright, on top of the patty was a mini-stack of onion rings with a portion of fried/grilled mushrooms running through the middle of them.

The top bun was left off to show the construction of the Raiders burger with the top bun sat on the plate with two big blobs of salsa and guacamole.

Taking a bite of this burger I got a hit of the onion rings which were pretty crispy, strong-ish, bold taste of onion mixed with a good flavour coming from those mushrooms.

I liked the mushrooms on this burger, they were cooked well and tasty.

The salsa was almost certainly out of a jar but yeah not bad and the guacamole was probably from the same source – not a massive fan of this on burgers and it started to become quite sickly pretty soon.

We shared each burger so I only had half of the Raiders.

It was fairly enjoyable but I’m not sure about those beef patties. I’d describe them as sub-standard and I’m adamant they are not handmade on the premises.

I’ll just have to trust Ed’s when they say they are never frozen.

Don’t get me wrong, they were juicy enough but I was suspicious when I smelt them being cooked and even more so after tasting them.

Processed is how I would describe them. Yes I know McDonald’s is processed but at least you know they are.

Next up we have the Dolphins burger.

Oh dear… can we even review this when it is missing the mixed peppers?

It was basically a dry burger bun, a beef patty (I swear these are no bigger than 4oz), ketchup, a forest of lettuce and that jerk sauce.

As we said earlier we traced the sauce back to its roots and it definitely was not homemade!

I don’t really know what to say to be honest.

I didn’t enjoy this burger and it’s such a shame we didn’t get to try it with the peppers on as I reckon this would have made it enjoyable.

The lettuce leaf was huge and had that sauce over it. That was it really… I sat there like Gordon Ramsey when he first visits a restaurant in Kitchen Nightmares… “such a shame.”

The place was busy and is clearly popular. I don’t know what the Gloucester burger scene is like (apart from McD’s, BK and Burger Star) but I wonder how a Real or Atomic would get on in the city…

I’d summarise the Dolphin as a disaster and the Raiders as sub-standard at best.

We hoped to score a touchdown tonight in Gloucester Quays but this was a clear fumble on goal.

We only intended to order a burger each but to their credit the staff brought out two meals.

I didn’t try the coleslaw as I’m not a fan, the chips were uninspiring but I loved the onion rings!

Thanks Ed’s Easy Diner for inviting us on this occasion but I doubt we’ll be back.

In the meantime let’s take one last look at the Disaster burger.