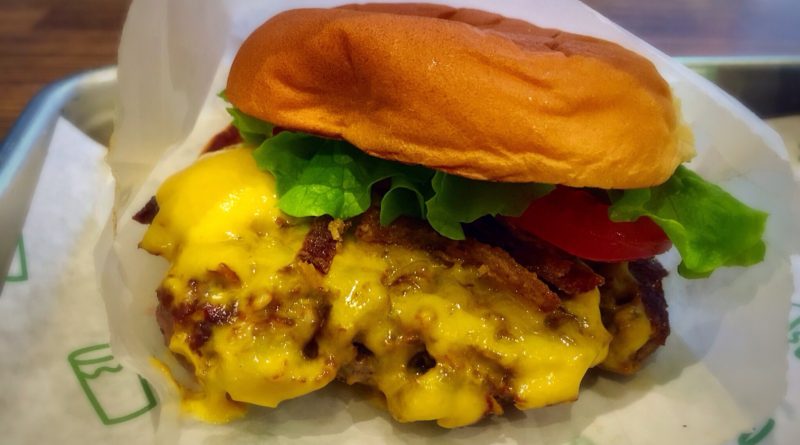 Who hasn’t heard of Shake Shack? Its arrival in Covent Garden last year at almost exactly the same time as Five Guys caused a veritable obsession. Enormous queues and the like…

Don’t get me wrong… I love a good burger, but when I see people queuing like in theme parks in the high season, I find humans a bit bonkers.

Anyway, the two new arrivals seem similar in the sense that they are recent American imports – both offer small customisable menus of high-end fast food.

Since the fuss around the openings, Five Guys has definitely got the jump on Shake Shack in terms of national spread, opening new branches frequently, and recognising most of the population lives outside the M25.

Shake Shack, for the time being, seems to be settled in central London only.

The menu is a right set of tongue twisters, with Burger Lad® having had the Shake Shack Double SmokeShack™ last time. Say that ten times quickly before continuing….

This time, I’m going off menu.

On the menu, they have the ShackMeister Dog, with its toppings of fried onions. Off the menu, the Shake Shack UK Twitter operator assured me, a MeisterShack burger is apparently available too. That’s what I’m having.

When I arrived, it wasn’t awfully busy, which was good. Obsessive queues, as I mentioned above, are just silly nonsense. You’d think it was a New Direction or Nicola Sturgeon concert.

As for the off menu item, Twitter operator’s assurances fell rather flat.

In fact, not only did they have no idea what I was talking about, they weren’t even sure if Shake Shack’s UK Twitter person was in the UK.

No matter, what was missing in internal communication was more than made up for in excellent customer service. We got there in the end. They were very accommodating and helpful.

It was chuffing freezing outside. Fortunately they put the little overhead heater on for me, but I still had to keep my coat on. I ordered cheese fries because they looked great on the photos.

Only when I asked where the toilets were, did I discover there was in fact a small indoor section. I can imagine it gets very busy at peak times. I decided to move indoors.

So, anyway a Shake Shack member of staff took my buzzer while I went to the loo, and when I came back, my food was all set out on my table. My first thought was CHEESE and my second thought was BEER. My third thought was MUSIC. Let me explain.

The burger and the cheese fries each had a lot of cheese on them. So much so that I could smell it. And it was wonderful. I love the smell of melted cheese in the morning.

Secondly, the beer. Shake Shack is going to Shake things up. Fast food and beer together is definitely a good thing. The established high street fast food brands sell beer in other countries, I think, but not here.

Shake Shack shows they could and should, but only at high street branches, not at drive-thrus, for obvious reasons.

Anyway, as I was tucking in, Mikey the manager, an infectiously enthusiastic American started chatting to me about the food and the company.

The tomato slices are all uniform in size, the beef is Angus and they are (rightly) very proud of its quality.

I handed him my BL® business card and he offered to bring a sample of the SS crinkle fries without the cheese so I could taste them “pure”. I did and they were good.

The seasoning is secret. There’s salt in there, but also something else I couldn’t quite put my finger on. Try as I might, I couldn’t get Mikey to divulge the secret. He just grinned a sort of “I could tell you but then I’d have to kill you.” A shame, but absolutely fair enough.

He also brought me a sample of their house ale, the result of a tie-up with Brooklyn Brewery, to go with the lager I already had.

I asked about national expansion and he explained that the company is looking at that, but not rushing.

Ah, before I move on – the third initial impression was the music. Too loud. But it was the Human League so I’m sure Burger Lad® and Miss Milkshake® particularly would be impressed.

Anyway, Shake Shack prides itself on helping and developing local communities so the selection of locations takes a bit more time.

From what Mikey was saying, I got the impression that we will see a few more branches in London first, followed by a selection nationwide. Watch this space!

So, I’ve covered the beer, the fries and the company. But what about the burger?

Well, first things first, the beef. This is far, far better stuff than its £5 price belies. Jaw-droppingly so. In my humble view, it is competing with the high street brands on price, but with the premium brands on quality.

The patty was of a medium thickness, knobbly and chunky, with a fleshy-pink inner core. It was bloody fantastic, actually.

The toppings – lettuce and tomato aren’t my favourites. Lettuce rarely adds much except to presentation, and it certainly did just that here. A good generous layer of green.

Most of the tomato was taken out – just because that’s my personal preference. The cheese here was in abundance, and got right into the meat with terrific results.

All of this sat in about as perfect a burger bun as you could imagine.

Finally, it was topped off by fried shallots, the “meister” part of things. These gave a wonderful depth of flavour and that delightful crispness that fried onions do, when done right.

Come here at weekends if you don’t mind queuing for a burger. It’s still very, very busy. Not any more so than Honest Burgers or MeatLiquor at busy times perhaps, but that gives you an indication of the sort of level at which Shake Shack is operating.

So, you probably don’t need me to highlight that I was bloody impressed – blown away actually, when you consider the price here.

I still won’t queue up for ages for a burger, but at off-peak times, this place is outstanding. #ShackFan 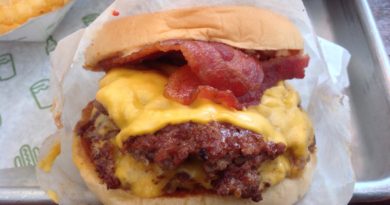