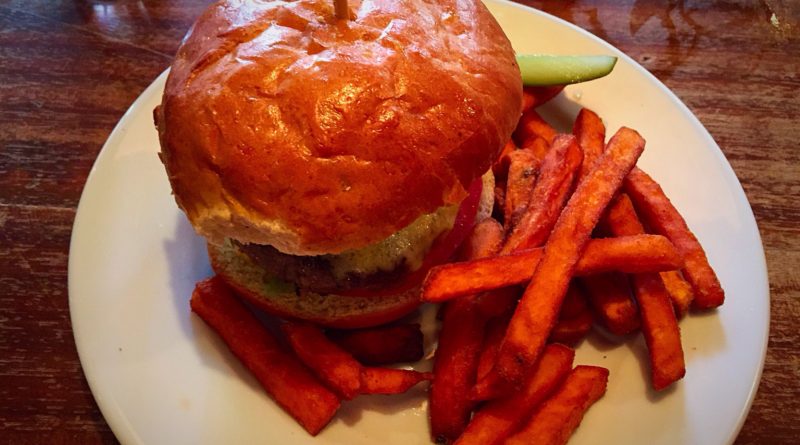 Drouthy’s is a pub in the student area of Dundee, and therefore not a place I’d go in the evening.

However, during the day they have quite a renowned burger menu, and is part of a small group of venues which also includes the Holyrood 9A in Edinburgh.

In fact, on reflection, I think I’d rather spend time with rowdy students than SNP politicians, and therefore I made a good choice.

The place was quite busy and was in the middle of restocking, with seemingly unending bags of brioche buns coming in, and the door was wedged open making it a little cold inside.

The place is a re-imagined version of an earlier pub “Drouthy Neighbours” (drouthy meaning thirsty) which was more of a student drinking dive, and has been brought well into the 21st century by its owners.

To the burger menu then, and there are a few beef options, based around their 6oz patty, as well as a couple of chicken burgers. The burger menu is actually different to that of the Edinburgh place, and the additional bacon is 30p cheaper.

But anyway, back to Dundee, and having seen the menu online, I’d already decided to have the Scotsman. This is a cheeseburger (bacon cheeseburger in my case) with tomato and lettuce and haggis as the defining feature. Haggis is a lot less of an acquired taste that some might believe, and is usually very nice. It’s just a question of not asking how it’s made, or what it includes.

So anyway, a bit of a wait while enjoying the extremely extensive drinks menu (and ultimately settling on Sharps Cornish Pilsner), and the burger arrived.

On a plate with a scattering of sweet potato fries (£1 upgrade), this was a good build.

The first thing I noticed was the fact that the brioche had a slightly larger diameter than the contents, which was sensible and kept everything in. It was a big burger, but not ridiculous, and I was able to eat it the proper way – with my hands – and the bun held together all the way to the end.

When I inspected the contents, there was one initial disappointment, namely the haggis. For some reason, they’d chosen to include two haggis fritters (deep-fried, battered) rather than the haggis crumble which is what I’d had in mind. The menu just stated “haggis” and if it had been clear it was fritters, I might have chosen something else.

Anyway, it was in front of me so I decided to get stuck in. In fairness to the haggis fritters, they gave me that warmly caressing flavour of haggis right away, and that’s the taste that dominated throughout. At this stage I was also pleasantly surprised by the length of time the beef retained its heat (temperature, that is, not spice).

And while on the topic of the beef, I must say that it was cooked rather too long. It was well-done. I wasn’t asked, and I really feel it could have been cooked a bit less, because it made the whole thing a little dry. It was a grumble, but not a major one.

Its 6oz size was quite ideal. Small, maybe, by the standards of some, but still quite thick, and peering inside I saw a fairly decent coarse texture and reasonable fat content. It was a tasty mix and of course would’ve been better if it were cooked medium.

The dryness was considerably countermanded by the tomato and even more so by the cheese, the latter of which had been applied very liberally and was particularly good. It was a smoked cheddar, with a noticeably strong flavour. Great choice.

I often take the tomato out of burgers but I didn’t here. The tomato wasn’t particularly large and sat under the patty with the lettuce, which also wasn’t overkill. The balance of toppings on this burger were all good.

The bacon, which was an additional topping, was also very good. I dare say most Americans would dislike it because it wasn’t of the fatty, streaky type, but rather the lean round style favoured by breakfast eaters in this part of the country. Couldn’t fault it, and I’m very glad I added it.

Finally, the sauce, which was a black pepper Mayo, added a very, very slight kick of spice to proceedings, while also having the dual benefit of keeping it all moist, something else which was extremely welcome.

In summary, a very solid effort, not flawless, but highly enjoyable. If the patty could be offered medium and the haggis included un-frittered, I’d definitely give this a higher score, but as it is I’d happily recommend it.

At a shade under a tenner, and with the accompaniment of one of the finest beer menus I’ve seen for a while, and absolutely spot-on service, this place has to be a contender for the best burger joint in Dundee. That is tempered slightly by what is frankly a poor selection of competitors – Dundee sadly is one of the least interesting cities in the UK in which to eat out, at the moment.