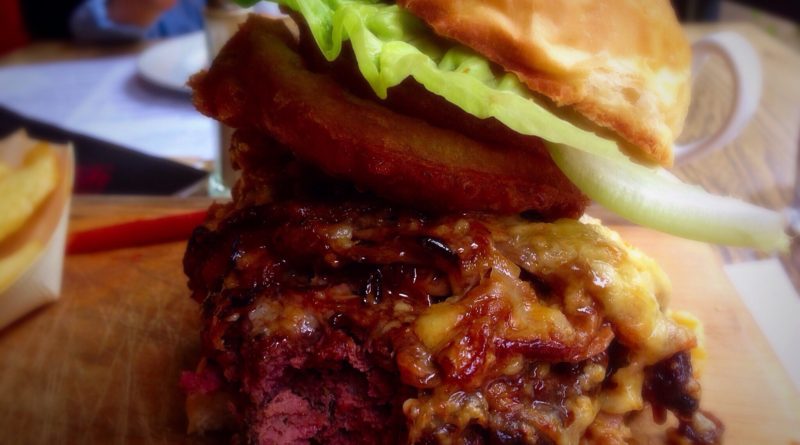 Beef & Pudding is one of countless top-end gastro pubs in Manchester, located very strategically in the middle of where countless legal and accounting firms make countless amounts of money doing whatever it is they do.

This isn’t a burger joint, but it is a bit of a temple of food. There’s an enormous amount of things I’d happily have, if I weren’t having a burger.

And it is a fairly iconic burger, not for the faint-hearted.

The burger has far fewer right angles than its architectural counterpart, and its cladding probably won’t date so quickly.

It’s a patty with finest brisket, horseradish, cheese and onion rings. As well as mushy peas, gravy and suet pudding. A sort of Northern roast in a burger. Certainly unique.

So I sat down with Commodore Junior and ordered chicken nuggets and a Beef’Ham Tower. The anticipation was building greatly and the Commodore was reminding me with every breath just how hungry he was.

This, I thought, is a terrific place to come if you’re hungry, or thirsty. It’s not inexpensive, but I suppose that is to be expected with the surrounding clientele.

I’ve seen pictures of this burger on the Internet, and to be honest, wasn’t feeling entirely confident I could finish it. It’s the big blob of suet pudding in the middle I think that makes it looks especially daunting.

That, and the mushy peas and gravy should make for some fascinating flavours too.

It also has an intriguing substance by the name of “Howling at the Moon” sauce, an obvious nod to the creator and sounds potentially fiery. We shall see.

Also visible is a huge slice of tomato (to be removed) and some incredibly impressive meat covered in cheese.

I got started. What an amazing flavour. This wasn’t just a gimmicky burger – it was a mighty tasty meal.

However, the small brioche bun simply wasn’t robust enough to hold it together, and the sheer height of it meant I had to resort to cutlery.

I really don’t like having to do that, but in this case the upside was that I could pour the gravy all over it.

I also squirted some of the sauce on there too. It looked and tasted like Tabasco was an ingredient, so to be used sparingly.

I wonder, if a burger needs to be eaten with cutlery, it essentially becomes a set of ingredients spread out on a plate (or a plank in this case) and is it still a burger?

Anyway, meat was the key here. The burger was very thick, pink in the middle, and extremely tasty. It had been seasoned in a very interesting manner. I couldn’t quite put my finger on it.

The suet pudding with mushy peas was interesting whilst on the burger, but spread out in this fashion, a bit less so. It became a bit of a dry side-dish struggling to keep up.

The onion rings were lovely. Very crisp, very tasty. As was the cheese, well grilled and draped substantially over everything.

I’m glad I added the gravy. It was fantastic and really added a sort of “Sunday roast” aspect to the whole meal.

The biggest shout has to go to the shredded brisket though. Yes, it comes from the same animal as the burger but so, so different in taste and texture.

It was soft, stringy and gooey and was the stand-out feature of this burger. I’d happily have a plate of that, just on its own.

So, the brioche bun didn’t succeed in its job of holding all this together, although it’s a tall order. This is a substantial meal by anyone’s standards and was a real difficulty to finish.

Not perfect. I’d prefer the mushy peas to be more liberally provided and, well… more mushy, and the suet pudding to be less dry. But other than that, it was very good.

Beef & Pudding is very popular and very self-aware but it is one of several leading gastropubs showing Chinese tourist guides that their tired old joke about the British menu being the shortest list in existence, is so last-century!

And I love them for it.