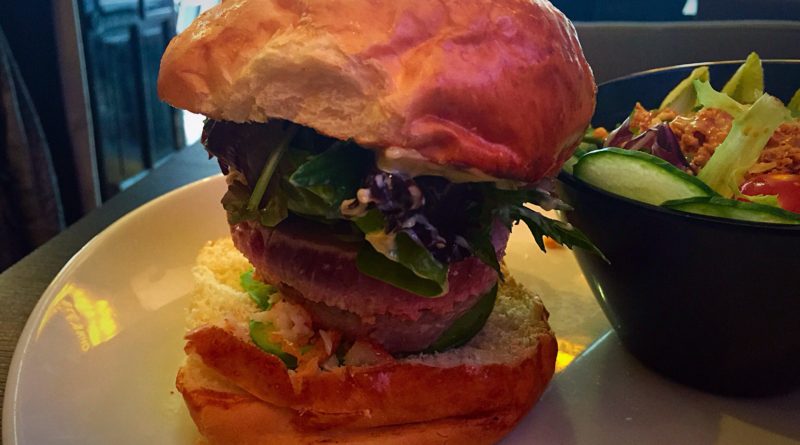 Our approach at BB’s is creative and cosmopolitan. When it comes to the menu, our fusion cuisine embody the values we stand for, carefully balancing various influences from international cuisines. Sea Folies – Homemade bread, snacked tuna tartar, prawns, avocado, curry mayonnaise, salad.

Well, I’ve had Brussels sprouts on a burger (at RnR) so now it’s time for a burger IN Brussels.

First of all, a note about the name of the place.

When I went, it was in the last few days of being called Hemgie’s but now it’s called Brussels Burgers.

A change of management means that while the other Hemgie’s branch is still Hemgie’s, the one I went to in the city centre is now Brussels Burgers with a new website (designed by the very friendly waiter who served me during my visit).

Both appear to be continuing with much the same burger menu, but presumably these will diverge as time goes on.

Anyway, back to the story. Straight off the train, I turned on the Burger Radar and it took me through all the narrow streets of Brussels’ historic centre.

I’d say typically Belgian, but with restaurant after cafe after bistro with waiters speaking Arabic to each other, it might be more typically Tangiers.

The Burger Radar led me to Hemgie’s Gourmet Burgers (now Brussels Burgers) in the Rue Dominicains, a laid-back modern place amidst ancient streets and galleries.

I sat down with a beer. A Silly Pils it was called. Silly, I presume because it came in a 250ml serving. Not even half a pint. Now that IS silly!

What’s also silly, but a huge amount of fun, is the burger menu here. There’s pork, liver, Apple, jalapeños, nuts, prawns, tuna, nachos, pear, pesto, beer and eggs on the list of toppings here, besides all the more usual stuff.

I was excited to experience a Belgian take on the food of the gods.

The choices on the menu were almost too much. I was going round and round and eventually decided to have something completely different, that I’ve never seen elsewhere.

I chose the Sea Folies. Not awfully cheap, but comparable-ish to gourmet burgers back home.

It’s different, very different to anything I’ve had before. Toppings include curry mayonnaise, tuna, prawns and avocado. Told you – different!

There was a degree of rush, which I hadn’t wanted, because the place was closing in 20 minutes. I found that odd – closing for the afternoon.

The waiter explained they do this every weekday but not at weekends. I’d happily have sat here for an hour or so with some beers before getting my burger but now felt rushed.

But only for a bit. Once my burger was on the table, the waiter didn’t make me feel rushed at all.

Once I’d finished, I went a few streets away to a bar with an Estonian barmaid who refused to grasp the concept of our country made up of four countries, a German tourist who was having a quick beer between stops, and two Belgian policemen having a mid-duty aperitif. But that’s a story for another day.

Back to the burger, and as I waited, burgers were taken out to other tables. They looked fantastic. And big!

When mine arrived, my jaw dropped. This thing was MASSIVE with a capital Mass. And apart from filling up my field of view like an IMAX presentation, the next thing I noticed was the smell. Very distinctly fishy, which is hardly surprising.

I saw the other customers tucking in with their cutlery. That’s also hardly surprising. The sheer height of this was almost impossible to deposit gracefully in one’s gob. But the Admiral has a big gob, according to the MoD, so I tried.

I failed. The contents were all over the place.

A tuna burger. Certainly a rarity and a first for me. Hence the dishonest. It wasn’t just a few tuna flakes. It was two large tuna steaks fashioned into a patty shape. Barely cooked – fresh from the sea, adorned with pieces of prawn, avocado and loads of lettuce.

And all of this was presented, as with all other burgers on the menu, in a bun made of “homemade bread”. This was a very soft, squashy, crusty bread of the very best European variety. Terrific stuff.

Quite apart from the fact that this was on a burger, this was incredibly fresh and tasty tuna.

Tuna isn’t among my top staples, but every now and again I do enjoy it and I enjoy it done right. This was done right and then some. This would happily have graced the menu of any respectable fish and seafood restaurant.

Naturally the tuna dominated. But like any beef or chicken burger, it’s the meat that is supposed to be in command. Toppings are junior ratings and shouldn’t be given command of their own vessel.

I’d travelled far and sought out a unique experience. I found it at Hemgie’s / BB’s. If you’re a burger aficionado and you happen to find yourself in beautiful Brussels, you absolutely must seek out this place.