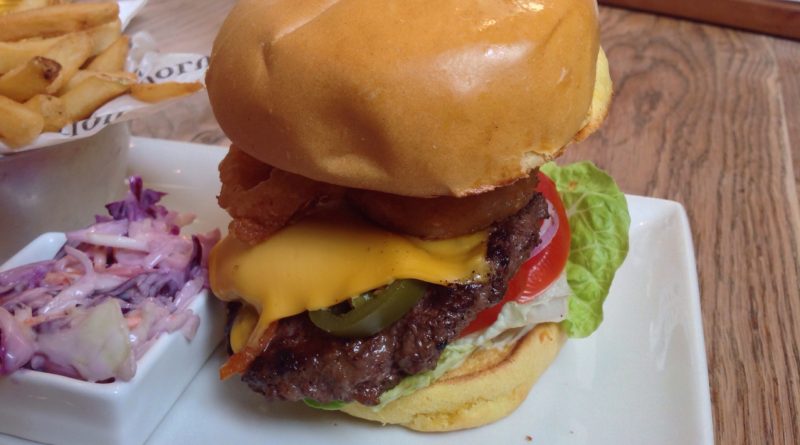 It was a dark Friday evening when I stumbled across the burger menu at Revolution in Cheltenham. As I understand it Revolution Bars can be found across the UK and having not been on the premises since circa 1999 I wondered what to expect of this unknown entity.

We popped in quickly before spending some of our high calorie salaries on the nine-course tasting menu at Lumière. I was instantly impressed with the overhaul of the interior and like The Terminator scanned the menu for my next target. After a quick drink I disappeared into the night but the very next day I was back to try The Vodka Burger.

It was ultra-quiet for lunch but that did not deter me. There are many establishments such as this offering mid-priced, American inspired grub – within a mile radius you have the likes of Ruby Tuesday, Prezzo, Copa, Après, 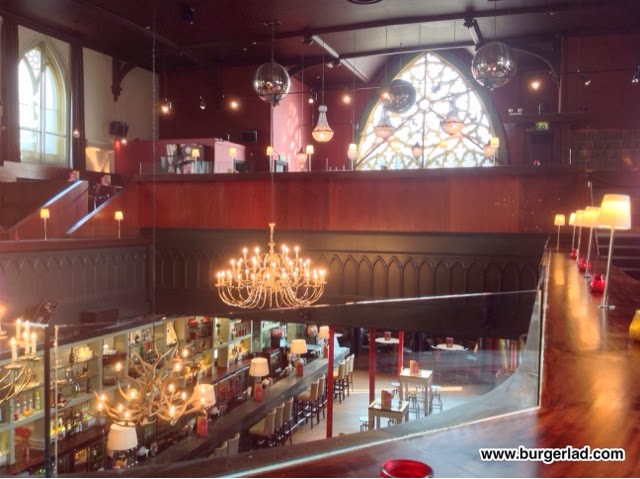 Re-route yourself to Revolution…

Inside has a modern, underground eatery meets shabby, chic Cotswolds Tea Room with a mix of chrome or copper lighting, wooden tables, black high-backed leather booths and soft furnishings. Looking around you can see why a pint is touching the £4.00 mark to help pay for the re-imagining of this old converted church.

Looking at the menu (and the menu in Copa) you can see that The Tavern has influenced not only the design but the content with dishes such as The Dirty Dog, burgers, pulled pork and Mac ‘N’ Cheese. OK they are a national chain but the similarities were there. I was surprised to see YO! Sushi style Chicken Katsu featuring as well.

Anyway let’s get to The Vodka Burger. I would have settled for a quick burger and Vodka chaser but on my latest 21st century adventure I got lettuce, tomato, the beef patty, chilli vodka salsa, jalapeños, 3 mini onion rings and American cheese. It was a very tidy plate of food served with skin-on fries and a mini ‘slaw.

The brioche bun was very soft, shiny and coped well with everything contained within. The stack looked quite high and had the all too common skewer through it but it wasn’t a massive mouthful like say the Ultimate Burger. The overarching taste is that vodka salsa which was very pleasant, slightly spicy and very moor-ish.

The patty today had been cooked medium to well-done, leaning moreover to the well-done side. It was homemade, fatty and had a respectable beefy flavour. The lettuce and red onion were yummy, fresh and crisp and added further depth to the overall flavour of the salsa and cheeky onion rings. The American Cheese had melted ever so slightly to bring it all together.

I enjoyed the skin-on fries as they were hot and crispy (not anaemic and limp) and the sweet, BBQ dipping sauce was worth the wait. A very commendable effort indeed! Alas we were in such a rush I didn’t get to try the ‘slaw but maybe next time…

My companion went with the tempting sounding Dirty Dog which was “A premium bockwurst sausage in a 10 inch brioche roll smothered with chipotle pulled pork, French’s mustard, ketchup and topped with crispy onions.” This was a respectable attempt apart from the bun which was too long at both ends and had been cut completely through.

So was this burger a revolution…? Well no. Was it enjoyable…? Hell yes! At £9.95 it offered pretty good value and on a Mega Monday I would snap a different option off the menu in a (vodka) shot. The Bourbon Bad Boy sounds tempting so maybe we’ll check that out with the rest of the bWo.

With that let us take one last look at Revolution Bars The Vodka Burger. A decent bar and kitchen burger where the Chefs take some pride in their work (unlike some Kitchen Bitches). At a shade under a tenner I would recommend popping in and giving it a go.

I know people have busy lives living in the Fast Food Lane but as ever we really appreciate all your comments so please… keep them coming!

One thought on “Revolution Bars The Vodka Burger”