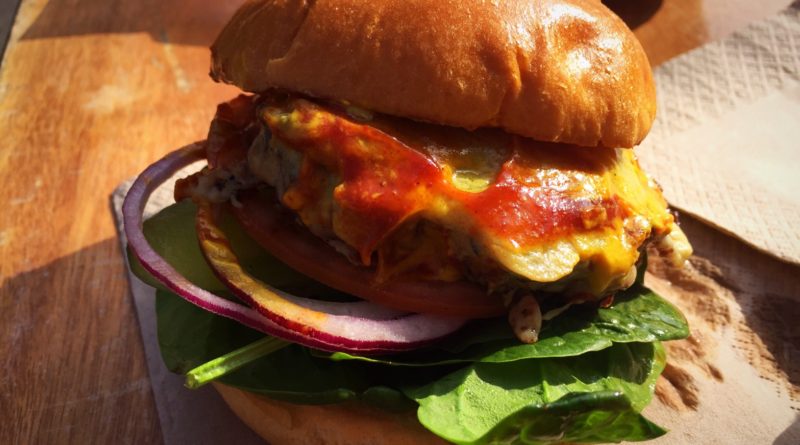 Choose one of our speciality ground steak burgers and prepare to be knocked off your feet with the juicy beefy deliciousness! All served medium in a brioche bun. Stateside Deluxe – Round Lettuce, Beef Tomato, Gherkin, Mature Cheddar, Streaky Bacon, Fried Onions, Heinz Ketchup & French’s Mustard.

Donning the street food hat once more, I skipped off gleefully today to catch What’s Your Beef at the triumphant return of Makers Market to Manchester’s Northern Quarter, on the first properly warm and sunny day of the year so far.

Great weather, great atmosphere, great food. Everything was lined up. And this wasn’t street food in a building, it was street food on the street, specifically Stevenson Square, the graffiti-laden heart of Manchester’s coolest zone.

A beeline straight for the burgers, and I found two very friendly chaps just finishing up the morning’s prep. I don’t know if mine was the first burger off the grill that day, but it looked like it.

It’s not a huge menu, and one of the burgers, the one with chilli, was off. I can only assume the chilli wasn’t delivered or something.

But it didn’t matter to me, because I’d already decided to have The Stateside Deluxe, essentially a bacon cheeseburger with oodles of trimmings.

I watched it being made, a little more than medium, and it was packaged up in a burger wrap that required instruction!

It was pretty clear from the briefest of chats, that these two are hugely proud of their product and their sourcing, and I’ll come back to the beef in a minute.

I may have failed to follow the burger unwrapping instructions properly, because when I opened it up, there was considerable slide. I’m pretty sure it didn’t go in like that so it was my fault. But it was easily fixed with a bit of pushing and shoving.

While I was tucking everything back in, I was able to have a good review of the ingredients. The stand-out visual was the the thick cloak of cheese, expertly melted over both the bacon and the beef, looking absolutely fantastic.

On top of that, on the underside of the top bun, was the mustard and the ketchup. And it wasn’t ordinary ketchup as listed, oh no. I was offered chipotle ketchup – really, who’s going to turn that down?

Down through the cheese, the bacon and the beef, then we had the red onions, plenty of those, and another variation to the description – spinach instead of lettuce.

That’s an improvement in my book. Finally in there, were a gherkin slice and a tomato slice, so as you can see a lot to get stuck into.

There was a good, not magnificent, but good and robust bun holding all of this in, and it did have quite a tough job, but handled it right to the end. It looked the part too.

Inside the bun, loads of classic flavours, where to begin?

Well, with the beef obviously, because that is going to make or break any burger. I’m delighted to say that it’s of a high standard.

Nicely seasoned – I even watched the shaker at work – and cooked well.

Well, I’d have given it a few seconds less, but it’s close. The beef was described to me as 50% chuck, 50% brisket, which certainly explains the flavour, and it comes from Limousin and Angus breeds.

As I said earlier, it’s abundantly clear that What’s Your Beef takes their sourcing seriously, and I can only imagine umpteen different blends being tested and discarded before they got to this one and were happy enough to sell it.

Street food does have its downsides – standing in the cold is often one of them – but unlike a lot of restaurants, this closeness to the process is untouchable.

You can see your food being made, you know where it comes from, who selected it, who’s cooking it. It’s wonderful. And it was sunny, AND I got a table, so no downsides today.

So the beef dictated this burger had a top quality foundation, and I can tell you that none of the toppings spoiled that either. Even the gherkin and tomato, the latter of which I often remove.

There was a distinct flavour coming through this whole thing, courtesy of the mustard and that stonking ketchup, well chosen.

And I really loved the crunch and tang of the red onions. Even the spinach, chosen over the lettuce that used to be on this burger, gave an ever-so-slight nuttiness too.

Finally, the bacon was applied generously, cooked well, and added the savoury saltiness that you expect of it.

I really enjoyed this burger, it does exactly the job asked of good street food and this particular one has all the makings of a benchmark in its class. 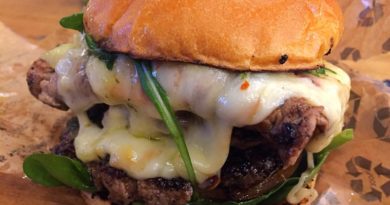