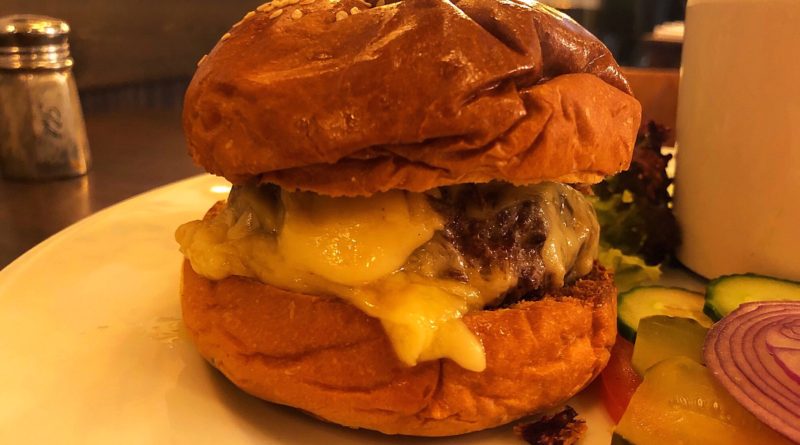 For my next burger, I chose a largely seafood restaurant, as you do.

Randall & Aubin is a two-branch place (the other being in London) specialising in fish and seafood but offering several other alternatives.

Strangely, although there is a choice between crab and beef burgers in London, the Manchester branch only has the latter.

Oh, and before I launch into the review, let me just address what I know is on your mind – there’s no Hopkirk here, deceased or otherwise.

So, Randall and Aubin, quite a sophisticated place (if the décor is taken into account), and a relative newcomer to Manchester. 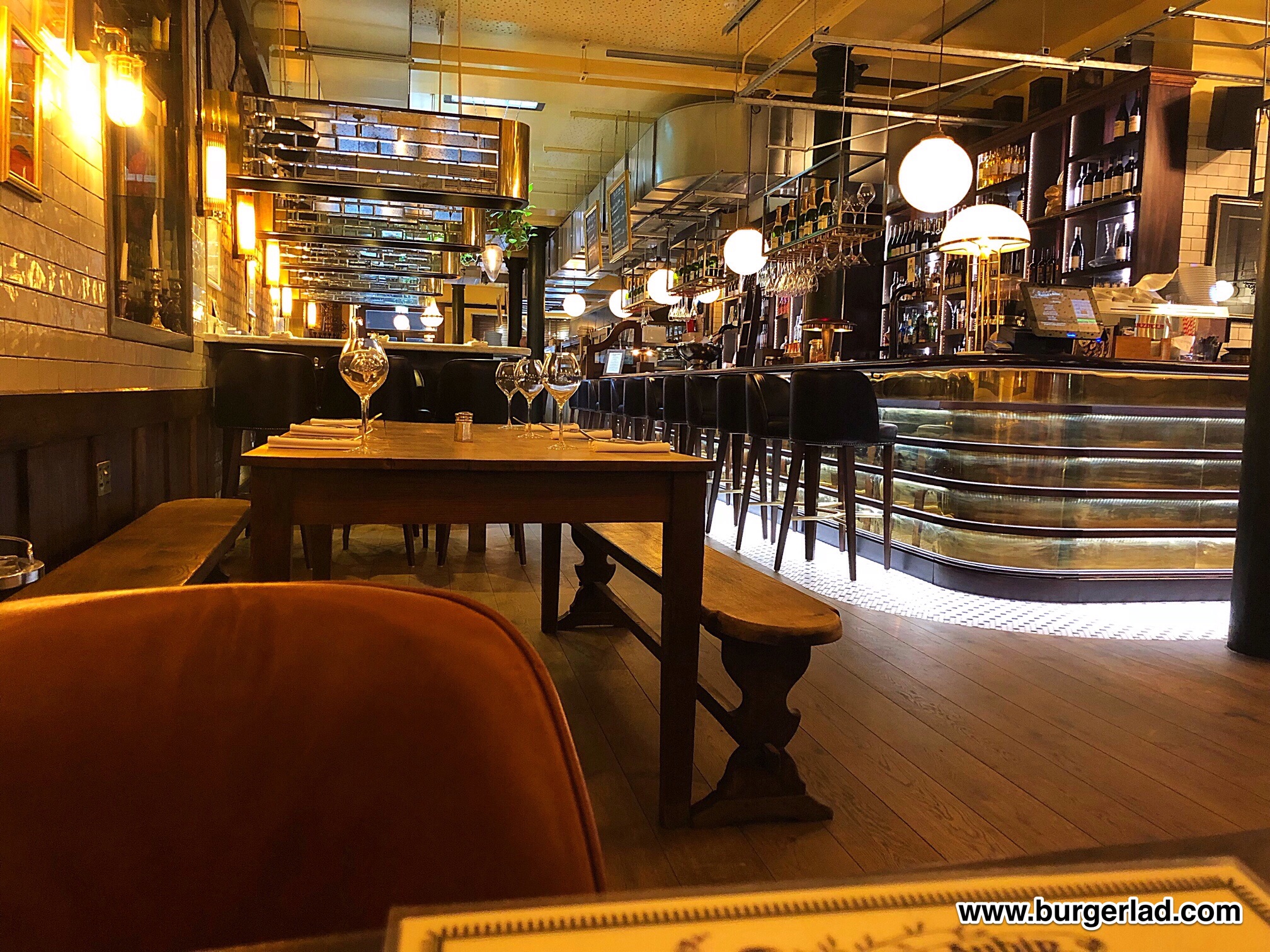 I was instantly taken with it, as both the interior and the exterior had a timeless class about it. The service was faultless and there were proper cloth napkins.

I’d also just say there is an exceptional use of lighting inside but I’m Admiral Burgerbar not Sarah Beeny so let’s have a look at the food.

Cornichons not little Rolls-Royces but are just gherkins, so what you have here is basically a cheeseburger with fries for £14 – Randall’s Prime Beef Burger.

That’s quite expensive, and given the size of it when it arrived, I’m not sure it is worth that price point. It would be interesting to see how many they sell of these versus the core fish dishes.

However, ordering it I was given a choice of how I’d like it cooked, which is definitely a plus point these days.

Anything from medium downwards. Rare, it would seem is not possible, although that’s not how I like my burger, so it was moot.

I chose medium and settled in for what was a hefty wait considering there were only three covers in.

It gave me a chance to inspect the rest of the menu though, and I can say categorically that I will be back here for fish and wine at the next opportunity. I also had a choice of cheese – blue or emmental and I chose the emmental. 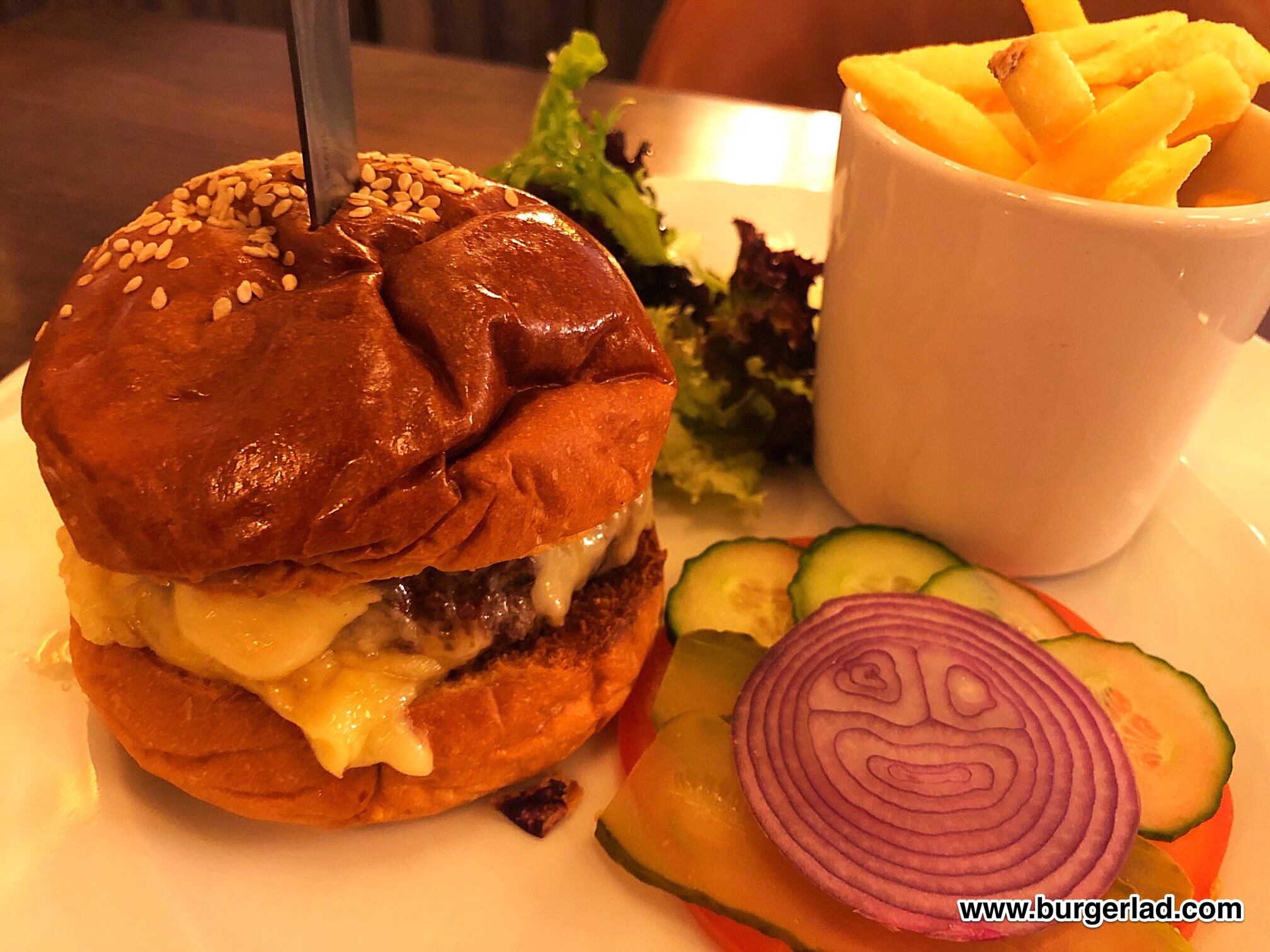 When it arrived, all laid out precisely, it was a neat little stack. The perfectly melted cheese instantly caught my eye as did a couple of downsides.

Firstly, they had opted for the over-used gimmick of a steak knife skewer. This burger isn’t big enough to warrant a skewer of any sort anyway. And secondly, the toppings had been laid out in a kind of build-your-own assortment.

Whose idea is this? It’s awful. 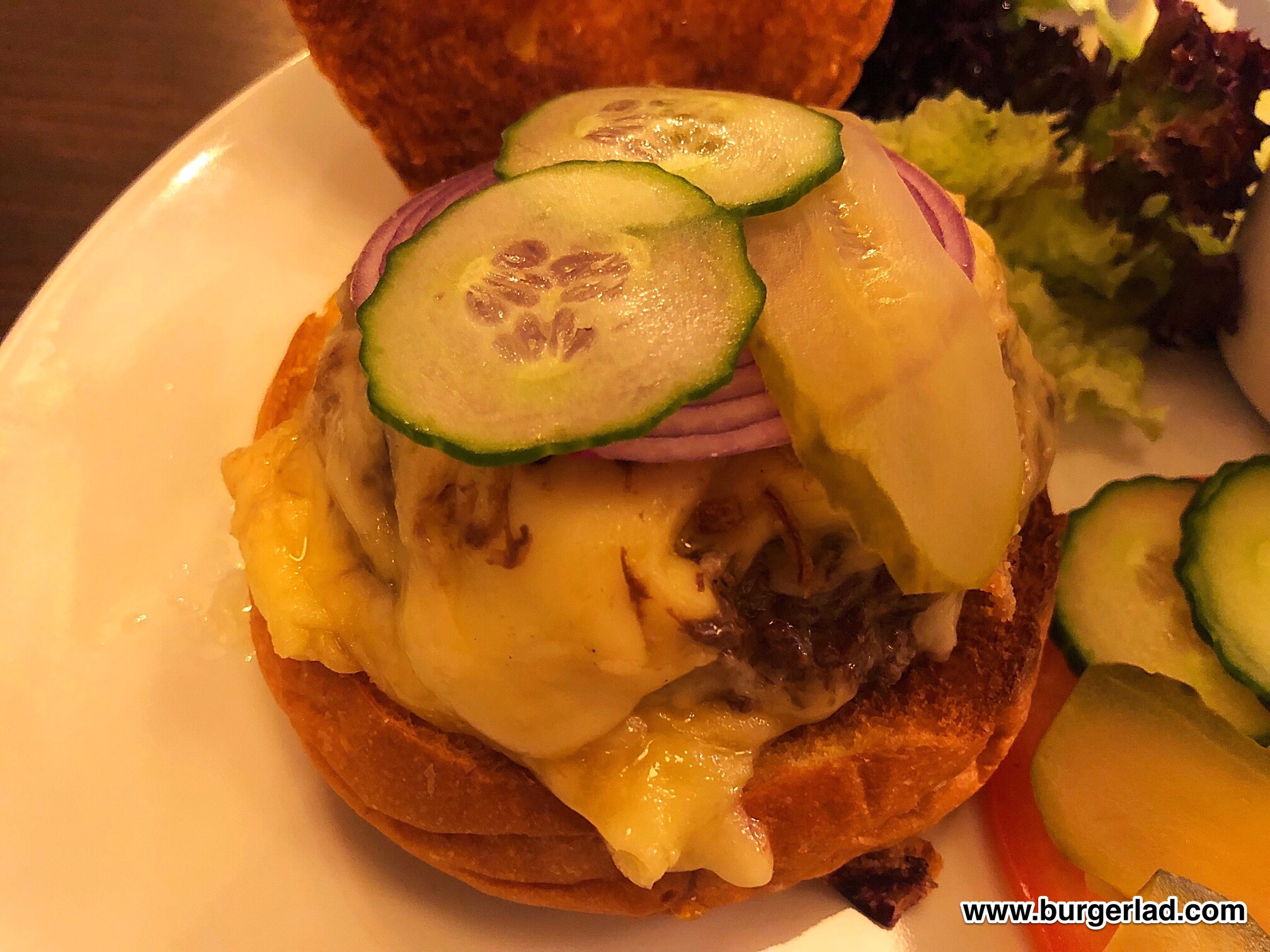 The menu says what the burger contains so the customer can ask for anything to be withheld if they want. I don’t want to be adding stuff myself, especially at fourteen pounds.

So, cheese and crispy onions were included on the stack, while tomato, fancy gherkins, red onion and cucumber slices were at the side. Some of these aren’t even on the menu, and I’d say this won’t do – the toppings need to be on the menu and in the build, this self-assembly nonsense must go.

Anyway, I built the thing, leaving the tomato, and tucked into the near-perfect chips (pommes frites as they’re called on the menu).

Admiring the burger, it is contained within a lovely seeded shiny toasted brioche but isn’t massive. It looks very easy on the eye.

Biting in though, my eye was drawn to something else – the pink, or rather the lack of it. I think this was a rather poetic interpretation of “medium”, erring realistically more towards well done. 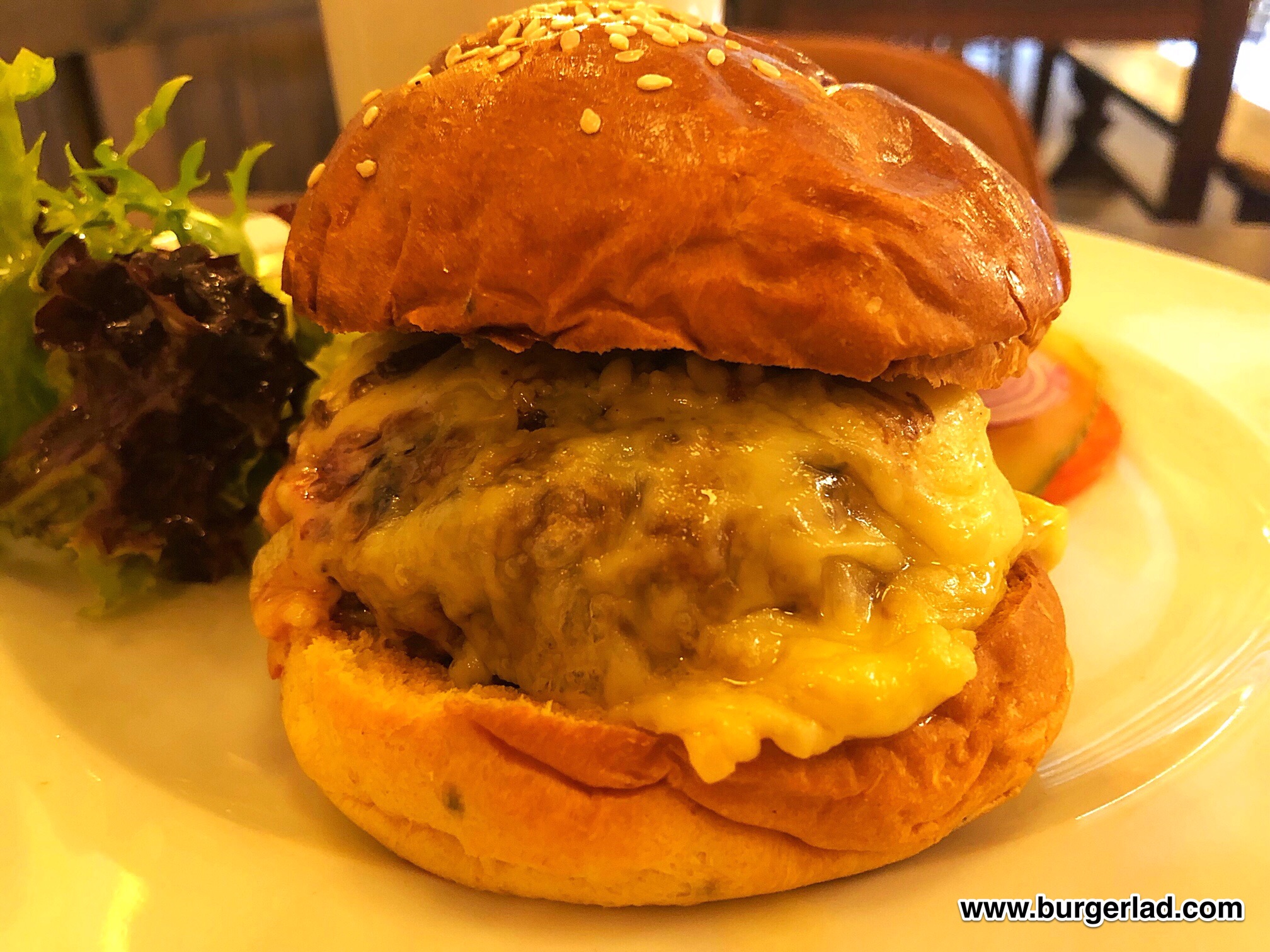 The Angus beef though, was lovely. It was thick, coarsely ground and juicy. Well-chosen I’d say, although I couldn’t quite get a handle on the fat content and left feeling it might have been just a bit too low.

In the big world of burgers, this won’t win any awards, but from a restaurant that isn’t a burger joint and specialises in fish, it’s a very solid effort.

It must sell, otherwise it’s an odd inclusion on the menu, and I’d very much like to be told why the crab burger is absent from Manchester.

Finally, I will say again that the service here was faultless and I left with a good meaty taste in my mouth and an overall positive experience. 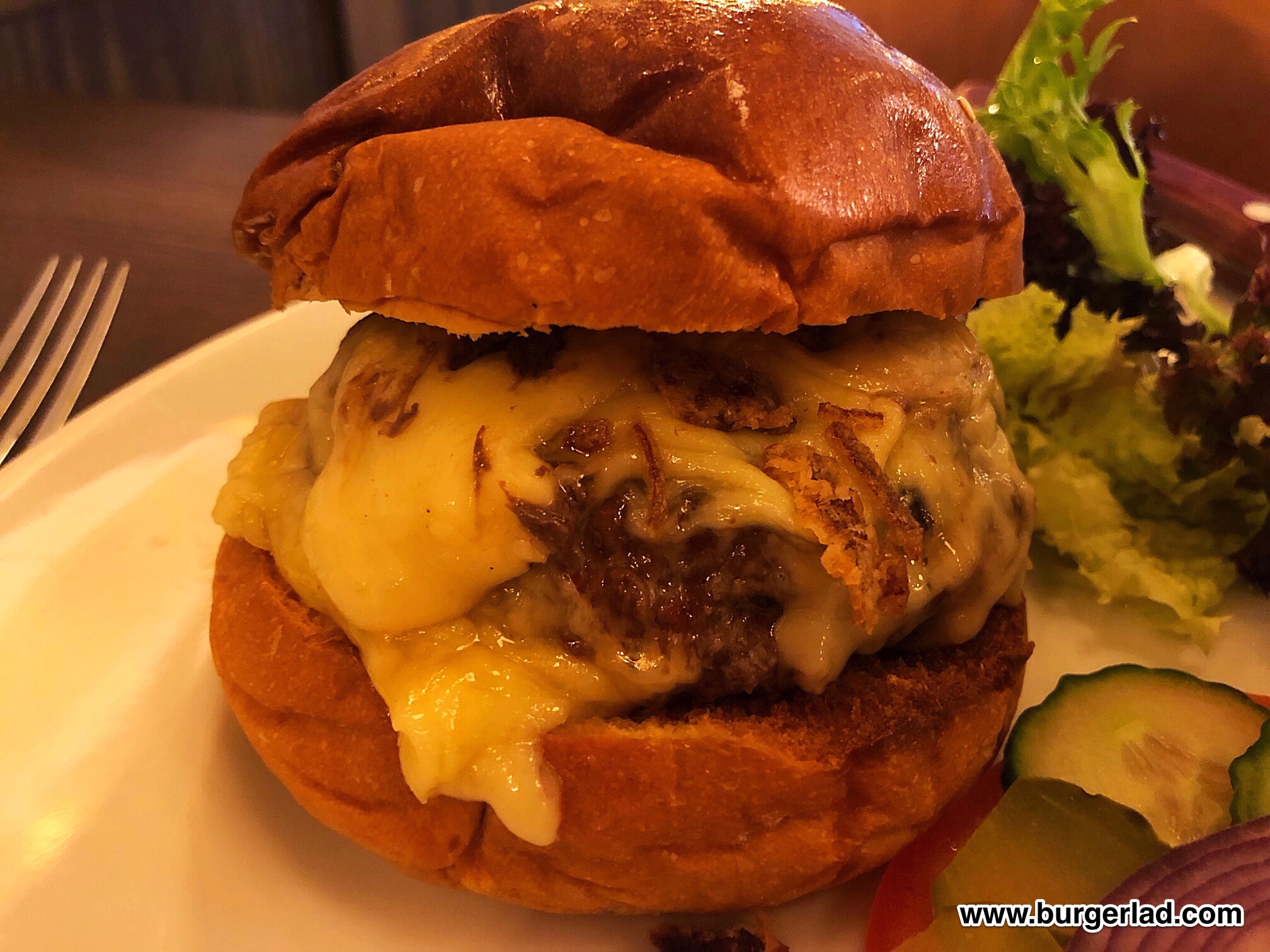 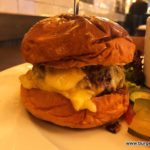