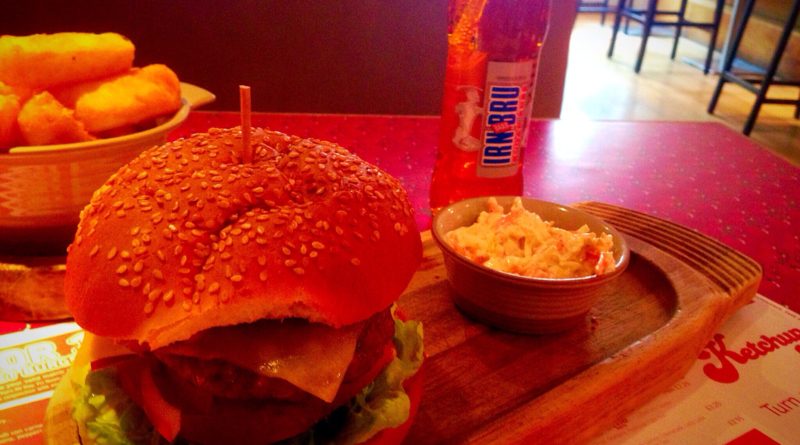 I thought Admiral Burgerbar had been quiet recently and then he landed this on my desk for 09:00 this morning. Burger Lad® is proud to present the Ketchup Dundee Who Killed Bambi? burger review…

A few months ago, it was time for the holiday brochures. With a whole load spread out on the table, I was faced with the difficult choice. I wanted somewhere sunny, by the coast, but there was too much choice. Barbados? Sicily? Thailand?

Eventually, the winner just stood out head and shoulders above the rest – Dundee.

A lovely place nestled on the Tay estuary, a bit burdened under nationalist governance, but for a short visit, that didn’t spoil the place too much, and the vitriol with which the nationalists express opinions online doesn’t seem to have spilled out onto the streets.

Besides, Dundee is also home to Britain’s best ice cream at Visocchi’s in Broughty Ferry.

The burger today was to be in a place called Ketchup that also has too further branches in Glasgow. It’s located right in the student part of town, and that appears to be the main target market.

The place seems to be part burger joint, part bar, and part late-opening student venue. With a table of crayons and balloons for kids. The decor is clean and fresh and comfortable and it appealingly presents itself to everyone.

The menu has quite an interesting selection of beef, chicken and others such as lamb, venison and veggie burgers.

Having looked on the internet beforehand, I’d already decided to have the venison burger “Who Killed Bambi?”. Name-wise I think that’s not quite right. I’m pretty sure Bambi survived to the end of the film, and it was Bambi’s mother who sadly died.

Fries and onion rings and the like are ordered separately and the chip offerings come in skinny or fat shapes. As there were a few of us at the table, we ordered both types and shared.

After a short time, my burger arrived, presented on a wooden tray with a little pot of coleslaw.

I tucked into the fries first and decided I liked the fat ones better. They were extremely hot and almost as thick as fish fingers. The skinny fries didn’t seem to have as much taste, and were quite cold, somehow.

When I took a bite of my burger I realised a number of things. Firstly, this is almost as thick as I can manage without having to resort to cutlery. Secondly, it was very sweet and thirdly, it was also a bit cold, sadly.

The bun did a fairly good job of holding everything in, despite the stickiness of the sweet chutney and the burger sliding on the lettuce. It was only the last couple of mouthfuls that required fork and knife.

The meat was what caused me the most perplexion though.

Venison isn’t a meat I have too often. Availability mainly. But I generally love the strong bite it delivers, more so than most other meats.

In this case though, I just didn’t get that. It didn’t shout venison at me at all. So much so in fact, that I wondered if they’d mistakenly put a beef burger in.

In addition, the apple and red currants in there were delivering such a sweet tone. This was not at all unexpected, but in hindsight, was perhaps a bit too much for me. Thank goodness my Irn Bru was sugar free.

The burger menu is very interesting. I really wanted the venison burger because it was venison. Had I known beforehand that it wasn’t going to taste very “venisony”, I would have chosen something different because there were several fantastic sounding stacks on there.

As it was, my burger was good, but sadly stumbled at its core. The essence of a venison burger surely is to taste of venison. It felt like an airliner with fabulously comfortable seats and the world’s best entertainment system, but whose engines don’t work.

I will definitely, definitely go back to Ketchup and order something else, because I really liked the place and the menu. The service was perfect as well.

This particular burger just didn’t do it for me though.

One of the menu items is called “The Randomiser” where you effectively put your appetite in Ketchup’s hands. I assume they ask a few questions first and then pick your burger for you. I may well give that a go next time.

One thought on “Ketchup Dundee Who Killed Bambi? Burger”