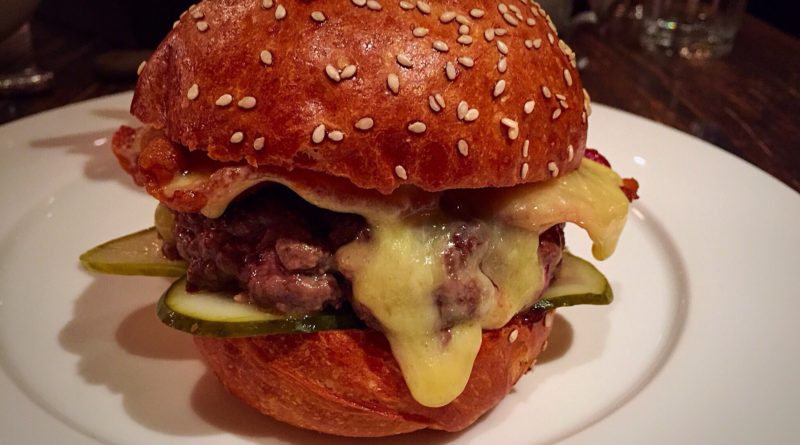 Across the road they also run Little Social, a more down to earth establishment.

Whilst one may aspire to a second Michelin star, the other serves a burger. And not just any burger, a burger much discussed in the almost infinite number of London-only burger blogs.

We pride ourselves on covering the whole of the UK (and beyond) as much as humanly possible, from high street to high society. And on that note, if you know of a burger currently on sale anywhere with a Michelin star, please let us know!

Little Social belongs toward the high society end of that graph. It’s a top place with, as far as London burger folks would have it, a top burger. But will it pass the BurgerLad.com standards? Let’s find out…

The burger itself is British beef, with bacon, cheese and onions – a bacon cheeseburger, basically… the best kind.

As I ordered, I was told it comes pink. Medium rare. Who am I to argue? Fresh warm bread, straight from the oven, was served while I waited and the accompaniment was a beer from London’s very own excellent Meantime Brewery. Good times ahead!

It was quiet and my burger arrived quite soon. Presentation was tip top here… large round white plate with a compact burger in the centre, and a conservative tumbler of fries.

Before I bit in, a very tiny issue threatened to spoil it. The only two other tables were both being very loud.

The first, two middle-aged Americans trying to outdo each other on their respective airline spends, and at the other, two young marble-mouthed Brits discussing their latest deals, with every zero in excruciating detail.

At a busier time, other conversations in the general hubbub would have neutralised these, but at this quiet time it was a bit irritating. Who, on their deathbed, ever says “I wish I’d discussed business a bit more during my life”.

Until I tasted this burger, that was, and then my entire concentration was focused on the enjoyment of it. This is a simple, no-nonsense burger at the top of its game. No gimmicks, just ingredients presented at their very best.

Let’s get into each part.

Firstly, the bun. A plain seeded affair, not too big. In fact, it looked made-to-measure. It tasted slightly toasted and it was magnificent.

The cheese was very liberally applied, great melted blobs oozing out of the sides like a scene from Ghostbusters.

The menu hadn’t clarified which cheese so I asked. Dutch cheddar (who knew?). Not as “bitey” as a mature British or Canadian cheddar but absolutely dripping in (and I use this term most sincerely) cheesiness.

The pickles. I was never a great fan of them per se, but since joining BurgerLad I’ve developed a desire to enjoy burgers as they are presented without manipulating the ingredients too much.

I’ve therefore tended to leave the pickles in. And here they were good. Large, but very thin, adding a slight piquant depth to the burger.

The bacon. Two very generous and perfectly cooked rashers. Bacon, as we all know, makes everything better and it was certainly the case here.

And that brings me to the beef. Wow! This was great beef. More bumpy and knobbly on the outside than the yellow brick road, cooked wonderfully and gloriously pink and juicy on the inside. Decidedly beefy.

Overall, this tasted fantastic. I didn’t want it to finish, and could have easily ordered a second. Not too large to worry the waistband a lot, just a perfect size, composed of ingredients presented in the best possible way.

This burger can be ordered with a topping of foie gras which I certainly wouldn’t recommend. Why?

Well, foie gras is such a rich strong taste that I cannot at all imagine it doing anything other than overwhelming the selection and harmony of the perfect ingredients in this burger.

Have it just the way it comes and be prepared to receive thanks from your taste buds!