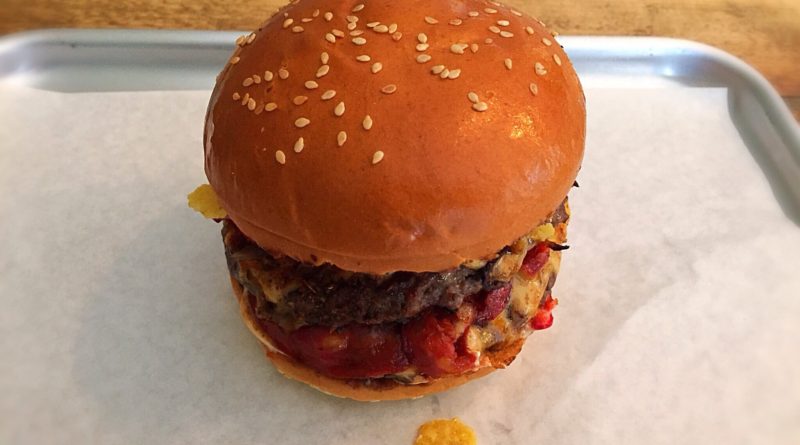 Get Chucked is a burger concept from Dirty Dogs, a well-known hotdog seller in Manchester. Initially a temporary setup, it appears Get Chucked is now here to stay. Well, when I say here, I mean Urmston.

Where’s that, you are probably not asking. Well, it’s a suburb of Manchester, outside the M60, near the Trafford Centre. It’s a normal place, unspectacular (but it has produced some rather terrific people).

On the face of it, not a wonderful choice of location, but with a bit of sideways thinking, it’s probably quite clever. The overheads are likely to be a lot less than the city centre or somewhere shinier like Altrincham, and it’s near the station, meaning it probably picks up quite a bit of commuter trade.

Inside, it’s stripped bare. Functional decor which is clear, bright and welcoming, with a bit of geometric colouring to draw the eye.

There are eight burgers on the menu, one of which (Body Poppa) our good friend Si Bags has already tested out for us.

At the time of writing, it looks like almost all of these burgers are due for replacement very soon, around the end of this month, so if you like the sound of either of them, you’d better get off to Urmston lickety-split.

So, the one I’ve chosen is the Mexican-inspired one, El Chapo. I don’t think it’s going to touch the similarly-named El Chappo from Lucky Chip because the latter is one of my all-time favourites, but it’ll be interesting to see just how good this Get Chucked one is.

It certainly has more ingredients listed than any other burger on the menu here, and it’s heavily tilted towards Mexicana. There should be some bite from the red chilli and hot sauces, tempered somewhat by sour cream.

There’s also cheese. It’s called “cheese” on the menu so I guess we don’t need to know what kind. And with all the other ingredients jostling for space in here, I’m not expecting its flavour to bang through much.

The Mexicana though, probably will come through, and it is provided courtesy of fajita spices, chorizo, and tortilla chips and of course the aforementioned heat. It’s like someone has been through a Mexican cookbook and picked ALL the ingredients. I’m looking forward to it.

I didn’t ask, and I wasn’t offered a choice of cooking. I’m becoming sadly resigned to the fact that the EHOs have removed juicy burgers from all but the most resilient and enterprising of restaurateurs. When I asked later, the young lady at Get Chucked explained the “rules” and that the burgers are “cooked through but not well done”.

Anyway, without too much further ado, this burger arrived, looking rather special. As was obvious from the list of ingredients, there was a lot packed in here. A small-ish stack with a LOT going on. I found it very well presented.

The sauce was immediately apparent. It was messy and provided a gently-building heat right from the first couple of bites. Holding all of this in was a seeded bun which looked the part, and seemed strong enough for the task.

Getting a bit further in, I found this hot in both senses – fresh off the grill and spicy. The fajita dusting was very obvious both to the eye and to the tongue. I also mentioned already that it was messy and this only became more of an issue – I found myself constantly reaching for the paper to wipe my fingers.

I had actually missed the part at the top of the menu that said all the burgers are doubles, because there was a second patty in here and that was a very pleasant surprise. What wasn’t a surprise though, was the lack of pink in the middle.

I would’ve preferred that, but I think there was in fact a rather good blend of beef in there with an ideal fat ratio – I could feel the stickiness as I closed my teeth together. I like that.

Getting back to the toppings, the sautéed onions and red peppers really added to the sense of having a fajita in a bun, and if that was the overall intention from Get Chucked with this burger, they’ve nailed it. But, the heat was dominant here. Not enough to spoil it but enough to keep me on my toes.

Heat is of course subjective. Some people might find this too hot. Others (not looking at anyone in particular Burger Lad) might find it very mild. Ever the diplomat, I’m somewhere in the middle.

The chorizo in here, oddly doesn’t really shine through as it often does in other burgers. I can only put that down to the heat and the sheer volume of other ingredients. The tortillas did provide a crunch, breaking up the sensations of the bite and rounding off a well-selected range of textures.

There’s no mistaking that it’s a dirty burger – you need wipes after (and during) and that all adds to the fun.

An enjoyable, interesting and well-structured burger, it’s probably not the most ground-breaking burger in Manchester as a whole, but I tell you, if you’re an Urmston commuter, this along with one of the beers they have, very probably hits the spot. If indeed there is a significant menu change coming, with the burgers built around this admirable patty, I for one am looking forward to see what they do next. 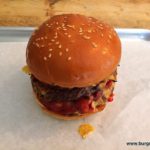 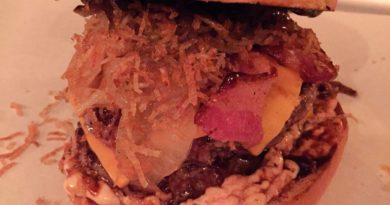 Get Chucked – The Body Poppa

One thought on “Get Chucked El Chapo”