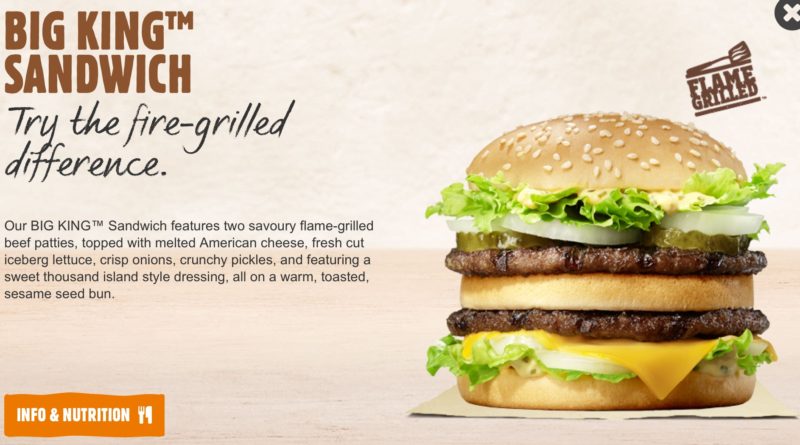 The Big King is very similar to McDonald’s Big Mac.

I have no idea if the massive legal teams at both the big fast food burger players maintain any sort of notion that copying doesn’t go on, but frankly it doesn’t matter. Imitation is flattery and if the product is good, then it’s good.

But, for the sake of balance, let’s just add that McDonald’s Big Tasty is similar to Burger King’s Whopper, so it all balances out in the end, and us burger lovers get four products to eat, where we might only have had two.

A couple of years ago, Burger Lad® put a Big King together with a Double Rodeo to create the Rodeo King. At that time, the Big King was pictured as having two patties but no central bun like the Big Mac has.

Now, I may be wrong, but I seem to remember the Big King having a central bun longer ago than that. So, either it has made a return, or has been newly introduced. Whichever is the case, the Big King now resembles its mentor even more closely.

So, having discovered this nugget, I felt obliged to give it a whirl. Having dug around on the website, I’d also discovered that BK is currently testing a new side dish – cheese stuffed hash browns, and I really wanted to try that too.

So off I went to BK in the morning. I like how BK don’t stick to such a rigid breakfast/main handover time and it’s often possible to have a proper burger in the morning. I surely cannot be the only customer in this market!

Anyway, it was the drive-thru today. I just wonder if, with this being the 21st Century and all, these drive-thrus couldn’t be brought a bit more up to date.

Granted, there’s nothing Burger King can do about people’s accents, but when you’re told to “Mmm mmmmf ah bmmmm ffff second window”, then you’re kind of left wondering if they killed Kenny.

It wasn’t busy though and my order came out correct and with a smile, so off I went back to the flagship to give this stuff a taste.

Oh, by the way, this branch wasn’t one of the lucky few doing the cheesy hash browns, so I ended up with chilli cheese bites instead. These things don’t look like much, but they are really tasty.

So, when I unpacked my burger, it looked to be quite well put together, albeit with another similarity to the Big Mac. That is that the promo pictures make it look higher than it appears in real life.

You’ll see in the photos that it isn’t actually a very big burger, despite its name. However at 440KCal, it means that it doesn’t bust the waistline either.

Visibly, there’s a lot of onions on this, big fresh ones, which give a tang and a crunch all the way through. My bugbear, pickles were also on this, but quite mild, and to be honest the Thousand Island style sauce sort of swallowed them up.

And speaking of the sauce, it tastes familiar, looks familiar land suits the burger well. I’m not sure I’d eat it on its own, but I enjoyed it on this.

There was a decent amount of fresh looking lettuce on this too, but lettuce is lettuce. What is more important was that there were two of BK’s signature flame-grilled patties on this, and their characteristic taste bled through every bite.

Yes, I enjoyed it. And what’s more, the Big King is often part of daily deals that bring the price down from its already reasonable point.

Sure, putting the word “big” in something doesn’t make it big, but this one doesn’t even need to be, because it hits the spot well enough. 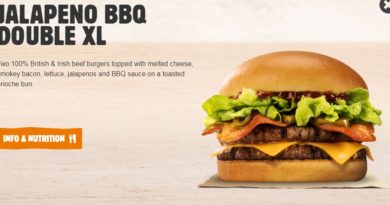 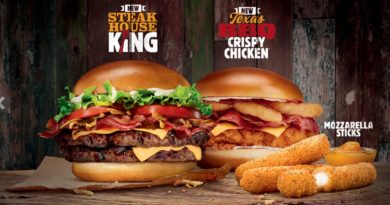 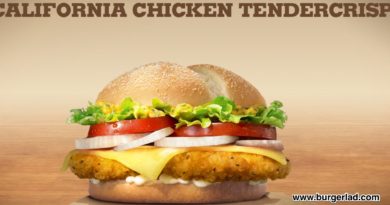