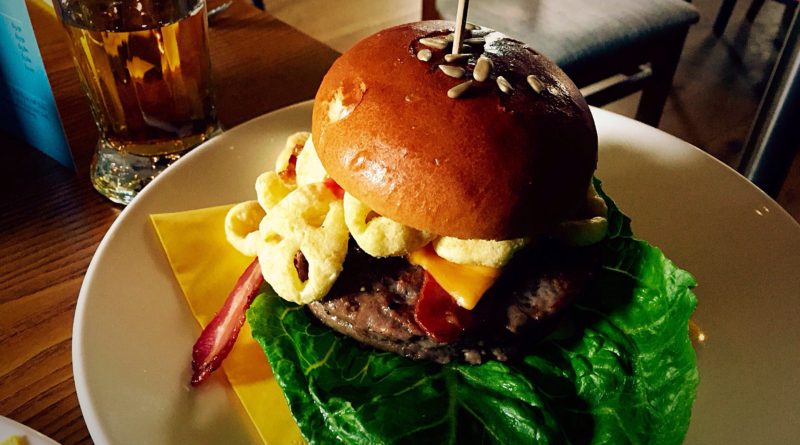 Review of Café at the end of the Universe, Manchester

We want to make you geeky pop culture inspired BURGERS!!

Price: This was a promotional event and burgers were provided free of charge.

This geek-themed burger joint is a project of Andy Kinsella, chef, burger aficionado and geek. He set up a Kickstarter campaign earlier in the year but sadly it didn’t reach its target and therefore hasn’t got off the ground yet. It’s a burger joint without the joint.

But never say never. What it does have is a well thought out selection of burgers and the drive and passion of Andy and his friends and family. The project is still alive and to promote it he’s doing this popup at the Blue Dog bar in Altrincham, where he used to work.

I was in early and got a quick chat with Andy. Despite the Kickstarter thing, the enthusiasm is clearly still there. The menu consists of geek-based fantastic gimmicky burgers, four of which were beef (one also with chicken) and one veggie.

I’d spent some considerable time looking at the menu and couldn’t decide between the four. The X-Files is Andy’s personal favourite but there’s also a spicy option and a sweet option. So difficult to choose.

Anyway, Andy’s better half Vicky offered more than one burger so I ended up trying three. My belt was rather tight the next day to say the least!

I decided to have the X-Files and the Firefly and they were brought out together. I probably would have preferred to have one after the other but that was a minor issue considering the generosity.

THE BEEF IS OUT THERE

Tucking into the X-Files first, I found a substantial bacon double cheeseburger with a hint of spice. It was good. The addition of the space raiders was clearly a gimmick to add an alien element to it, and of course added a welcome and intriguing crunch. The bacon was fantastic and added a considerable amount of pep to this burger.

Lettuce rarely adds anything to a burger but what they’ve done here is slot in a whole leaf and actually it does add a slight hint of greenery taste.

The patty itself is of medium thickness and looks rather bland despite having a good flavour. Apparently it’s an 80/20 steak mix according to Vicky.

It’s really very tasty and I ended up eating far more of it than I intended. Tastier than it looks. In fact, on the issue of the look, I wonder if the Café could do with developing a slightly thicker, pinker version.

I can see why this is the chef’s favourite. It has it all – flavour, texture, quality toppings as well as a slight hint of heat, and of course considerable fun.

I don’t think I’m a geek however you choose to define one, and I’m not particularly interested in that part of the project, but as with any food based scheme, the food has to be at the heart of the offering and that is absolutely the case here.

Moving on, the Firefly offering is similar and yet so, so different. It is also a bacon cheeseburger, but instead of crisps and spice, it has chocolate as its gimmick. That represents the brown coat of Firefly’s captain.

Biting in, it definitely tasted like a dessert burger. Sweeeeet as Eric Cartman might say. Utterly unique and not at all something you’d get elsewhere. It’s incredibly moreish and once again I ate more than I intended. Beef, bacon, bun, chocolate sweetness. All the things we like rolled into one. I dare you to try just one bite of this. You won’t succeed.

So that’s the first two burgers. Fun and fascinating, this is a business that really deserves a permanent home. Well-chosen buns, good patties and extremely well identified and themed toppings resulting in burgers you simply won’t experience anywhere else, whether or not you consider yourself a geek.

The final offering takes its inspiration from Buffy the Vampire Slayer and isn’t messing around. It is properly spicy. Essentially a chicken and beef double whammy with all manner of things to burn the roof of your mouth off. Even Burger Lad® would consider this one spicy.

It wasn’t just hot, it was so hot that even Vicky hadn’t dared try it. But it was pretty fantastic too. The heat built up and lingered on the palate in a delightful way.

Even though I tend to shy away from extreme heat, this was just about at a level I could manage. I’m not sure why this one in particular had one beef and one chicken patty rather than two beef, but I quite enjoyed the difference, albeit the more delicate chicken taste was largely masked by the hot sauce.

I’ve experienced three distinct burgers here. The X files one is a bacon double cheese with a bucketful of flavour and a whole lot of ambition.

The Firefly one is the epitome of a dessert burger that’s so good you don’t want to, and don’t have to, wait until dessert. And finally the Buffy one is the burger for those who don’t tiptoe around chilli. It’s the real deal! 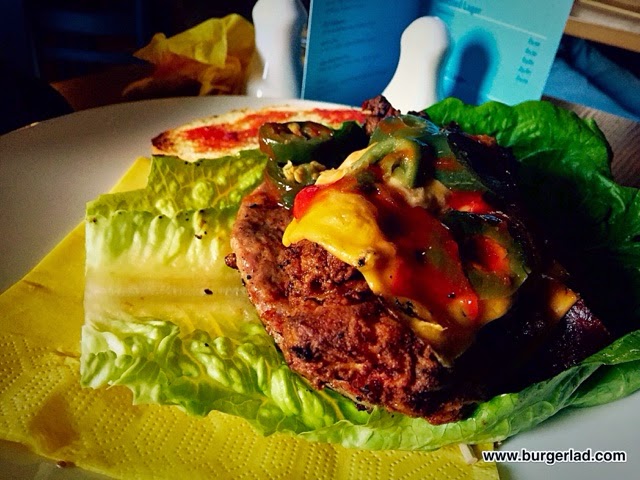 Having enjoyed the whole experience I left with a couple of thoughts which I’d jotted down in shorter form on the feedback sheet I’d been given.

A chicken offering. The Admiral loves beef-based burgers as does our chief, Burger Lad®. But a lot of people prefer chicken. Even the fast food places tend to include a chicken option amongst their promotional ranges.

The beef patty tastes great but doesn’t look the part. If it were possible to have a thicker piece of meat, with a crumblier, knobblier texture, cooked medium, I think that would really raise the game in terms of presentation. If that meant some of the burgers would become singles rather than doubles, then so be it.

Verdict then from a burger point of view- this is a venture that needs to succeed. Themed food isn’t a new idea, and neither is a burger joint, but Café at the end of the Universe absolutely brings a novel twist to the table.

Watch out for their new Kickstarter campaign and be sure to help make this happen. 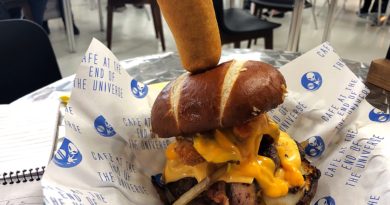 Cafe at the end of the Universe Pennywise