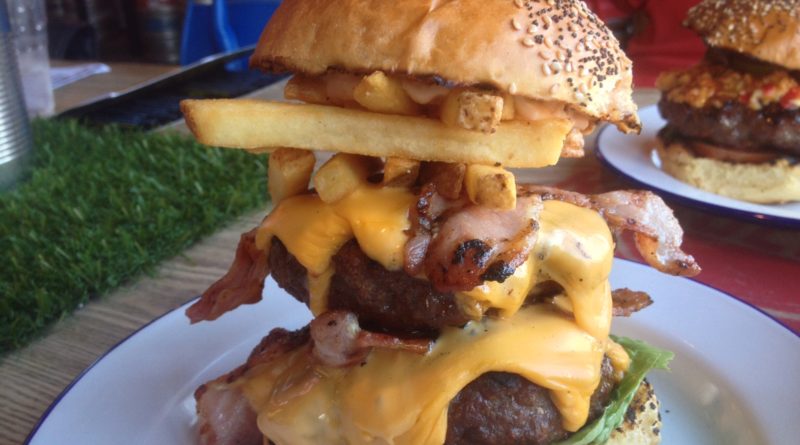 What extreme measures did we go to, to bring you a review from the burger joint known as Burgerfest in Taunton, the county town of Somerset?

I’ll tell you now. We made the 90-mile trip from BLHQ on the worst possible day for hitting the M5 – Good Friday!

A 90-minute drive turned into a four hour nightmare as we battled our way through Bank Holiday traffic. But was it worth it?

Backtrack to autumn 2015 and I’d had a brief conversation with whoever runs the Twitter account for Burgerfest.

I believe the said person could be the one that was associated with the Torquay restaurant and they invited us to Taunton for a free meal. Excellent. Although on the day we couldn’t make it, we apologised and said we would hopefully take them up on their kind offer at a later date.

Well since that time it seems the restaurant they have in Torquay has closed down.

They’ve gone quiet on Twitter and the waitress didn’t even know they had a Twitter account. Also the BF location in Exeter (I was told) has become something else completely – so they’ve gone from three establishments to one in the space of five months.

Luckily for us, Burgerfest Taunton still has a presence on Facebook so it was via those channels I arranged our visit.

And like any other experience where we don’t actually pay anything for the bill I’ll say now, this has absolute no impact on our honest and impartial review. Moving on…

Just on Bridge Street, a stone’s throw away from Taunton town centre is Burgerfest. It looks cool from the outside and inside it is the same.

You’ve got a relaxed and friendly vibe going on with room for at least 70 covers. It screams dirty burger joint, with padded, upholstered beer barrels for seats and the fairly common exposed ventilation system on the ceiling with low hanging bare lightbulbs.

I bet it looks stunning sat inside here at night next to the water’s edge especially with the fairy lights on too.

We absolutely loved it inside though. It felt like that place you could just hang out in all day.

They’ve got some fantastic burger graffiti artwork adorning the walls with comfy sofas and a Nintendo N64 plugged in and permanently on with a wide-selection of games you’re free to play on.

They’ve even got their own mini-arcade with a few games such as Time Cross 2 and the Fast & The Furious.

It’s a burger joint that screams of a welcoming environment where you don’t feel in a rush to either order or leave after you’ve eaten. Loved it. And the staff were excellent too.

Burgerfest have a wide menu including the naughty £25 challenge which in all honesty I would fail miserably at. Just check it out on their website!

I noticed the winners and losers board but to be honest, if I managed to complete that challenge I’d want a statue in the middle of town outside the castle and not just a free t-shirt.

Here you order at the bar which is not uncommon. I was disappointed to be in what I would call Cider country and only have the choice of Pear or Summer Fruit Kopparberg – no apple options!? But what I really did like was the choice of bottomless soft drinks (serve yourself) which is a very good option at £3.50.

I’ll come to the burger in a minute but what I’d also like to mention is the awesome option of a slider board – choose any 3 burgers off the menu for £6.95, which is really very good when you are torn as what to go with.

As we were leaving I also noted an exceptional Monday to Thursday lunch deal – £8 scores you a burger, fries and bottomless soft drink (some exclusions apply).

Anyway, enough with scene setting let’s get to the crux of the matter. And here I present The Bad Boy!

I sort of couldn’t really pick out one stand-out Burgerfest “signature” burger and I guessed one with BF Sauce would be a good starting point. I was actually later informed this and the Smokey Joe are the two most popular burgers on the menu. And when it arrived I could see just why!!

This is a massive burger! Massive! Two 7oz patties made using 100% British beef from Local Newton Abbot Butchers, R D John’s make this a terrifying tower and an intimidating burger bully. Where do you even start to eat this stack!?

Physically, it is impossible to get your mouth around the whole thing so you have to attack the stack in two halves.

The patties themselves are very meaty with a decent natural chargrilled flavour impaired on them from the cooking time on the griddle.

What I did notice, was that on the menu it does say to inform staff if you want your burger cooked well done if you prefer (so the assumption is that they’ll come medium) – these were certainly not medium and had been cooked well done. But they are incredibly juicy and to their credit, show no sign of dryness.

There’s copious amounts of the thick American cheese which is melted seductively all over the chaos packed between the two buns.

The bacon is enjoyable, there’s a great amount on-board this build but for me ever so slightly too salty for my liking… but again more personal preference than a criticism.

Two thirds into The Bad Boy, unsurprisingly the heel of the bun is starting to look a bit worse for wear (like me) as I start to hit the dreaded wall. It’s also at this point I’m really in need to something a bit more comfortable to sit on than a chair without a back rest. At this point I needed the sofa by the N64.

Another reason I picked this burger was the part in the menu description about being “stuffed with seasoned fries” – sounds canny that.

They didn’t really add anything if I’m honest and thought it was more of a contribution to the shock/awe/wow factor of when it arrives in-front of you instead of for flavour/texture reasons. That said, we had a side of Skin-on Fries (£2.50) and they can only be described as magnificent. Really bloody good fries.

The BF Sauce was another reason I wanted to try this burger and I found it got lost amongst the boldness of the beef and salty bacon which was a shame. It was very subtle and I struggled to pick it up. It was mixed in with the fries, certainly a mayo-based, Thousand Island-type sauce. I don’t want to call it a “Big Mac” style sauce as it missed that gherkin/vinegar tang. Like I said, very faint.

Miss Milkshake went with the El Diablo and had no complaints whatsoever about her burger and I’m sure we’ll see something from her in the comments section soon.

For me, I couldn’t help but think of the 1977 movie A Bridge Too Far but on this occasion you can swap Bridge for Patty.

In all honesty, I think I would have enjoyed a one patty burger more than this monster and I could only weep when thinking of that challenge (check it on their website!).

Did I finish The Bad Boy? I couldn’t. I was close but just couldn’t quite stretch to finish the lot.

I’ve always considered myself a bit of a “bad boy” but today I was certainly bullied by the “bigger boys” – that being the pair of patties roughing me up in the restaurant.

Something about the texture of the patties also didn’t quite sit right for me. No shadow of a doubt, they use local good Butchers, but I think they could re-visit the blend they use.

I don’t want to say this in a derogatory manner but it almost reminded me of a grill steak in terms of texture. Again Miss Milkshake didn’t notice that so it could have been due to the sheer volume of beef I was trying to consume.

I don’t want to end this review on a sour note as Burgerfest is really a very good burger joint.

If they think about looking at the blend they’re using for their patties they can turn a good burger into a great burger. And if you’re ever on the M5 and see J25 approaching and fancy a pit-stop, it’s only 5-10 mins away from the junction and well worth a visit.

So thank you to the guys and gals for your hospitality today. You certainly helped erase the nightmare of a journey down with your awesome burger joint and good eats. And hats off to them too for honouring the invitation down so thanks again!

One thought on “Burgerfest Taunton The Bad Boy”